From Insects to Prohibition 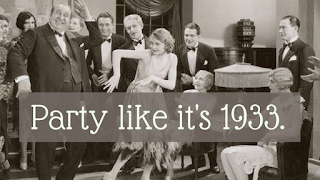 I’ve had a fly in the house for at least two weeks and no matter how many times I’ve tried to smack him, he gets away. Finally, I googled how long house flies live and learned it’s 28 days. At least I won’t have to put up with him much longer. I don’t like killing things but there are two more critters on my hit list if they don’t find their way out from between my window pane and screen soon. One is a daddy longlegs and the other is an inch long beetle. They are in my view whenever I’m at the computer and they’re rarely more than five inches apart. They’re like the neighbor you don’t know but you’d notice if he changed his routine, a stranger that makes you feel less alone because you can see him across the street doing similar things that you’re doing on your side of the street. Ohmygod, am I so bored that I’m making up back stories for insects trapped by my screen? I wasn’t sure if they’re buddies or if one was stalking the other for dinner. I got my answer yesterday when the beetle was half hidden and the spider walked over top of the beetle and they both lived to tell their friends about it. But the drama of watching that happen was a nail biter.

I miss seeing birds outside my window. I quit feeding them last spring and won’t start in again this winter because the seeds falling on the ground were attracting mice in the basement. Knock on wood, I’ve seen no signs of them moving in this year. I’ll put out my heated bird bath soon, though,  with hopes that I’ll wake up some morning to see a pair of mourning doves sitting in the water like they’ve done every winter since I’ve lived here.

I’m sitting here looking at a tin sign on my kitchen countertop that says, “Keep and enforce Prohibition.” I don’t have a lot of prohibition memorabilia to sell on e-Bay---a few pledge cards not to drink, a box of pinbacks that proclaim things like: My vote goes wet, Vote Dry Vote Yes, No Saloon Vote No, California Dry, Ohio Dry and I’m Against Prohibition. I have always loved our prohibition collection that also includes a full bottle of Temperance Beer which is actually a ginger drink, non-alcoholic from the turn-of-the-century. That whole era of our history is fascinating which is the reason why people collect Prohibition stuff. The federal law against making, selling or transporting liquid only lasted from 1920 to 1933 but the campaign to get that law passed in the first place started way back in the 1800s with groups like the Anti-Saloon League and the Women’s Christian Temperance Union and other zealous religious groups. As far back as 1851 they actually managed to turn Maine dry for a few years. So many interesting things happened during and/or because of Prohibition---the speakeasies and underground tunnels connecting them, the Age of Jazz and Al Capone, the beginning of the Great Depression to name a few.

A lot of the same women who fought for Womans Suffrage (our right to vote) were also involved in the temperance union. Like Susan B. Anthony. I stayed in the very room she stayed in at a Bed & Breakfast in my favorite town on Lake Michigan. How's that for my meager claim to fame? She led a group of women up Main Street who were determined to close down the bars (and did for a day). It was an impromptu march. She was staying at the inn because she was giving a suffrage speech the following day in the town where I live. I often wonder what it would be like to be my age and have a life-time of dedication under my belt to a passion project like she had. Was she sad that by the time she died, women still hadn’t achieved her goal? She came close, she died in 1906 and the 19th amendment giving women the right to vote was added to our constitution in 1918. But did she see it coming that soon, or did she feel she'd wasted her life on an impossible dream? History always tells a story that the present can’t possibly do.

I guess we all can’t be leaders in a cause that’s near and dear to our hearts. Some of us have to be the foot soldiers, the water boys, the ones who keep the home fires burning. And some of us have to be the storytellers and documentarians who write the folk songs and tell the stories to remind us all to respect the accomplishments of past generations. And the value of remembering the past is to give us the patience and strength we need to continue to fight today for what is right in our moment on the timeline of history like environmental protections or sensible gun control or whatever else is calling your name today.

Okay, for all the non-collectors who might still be reading this, I hope this post gives you some understanding of why a framed, I-will-abstain-from-the-use-of-all-intoxicating-liquors pledge card sat so long on my bookcase. It’s more than a piece of cardstock, it’s a storyteller’s queue card. All collectibles are story queues whether in homes or museums, they are objects that spark conversations and, hopefully, an interest in learning about the past and the people who lived there. ©

Up Date: I wrote this over a week ago and had it in my scheduler. Since then the spider and the beetle disappeared when it snowed. Don't know where they went or if they'll be back. It's one of life's little mysteries the occupies a bored mine.
Posted by Misadventures of Widowhood at 12:30 AM