The Thankful Widow at Thanksgiving 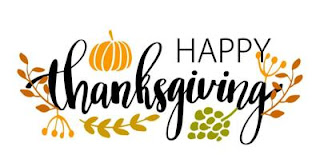 It’s the day before Thanksgiving and all through the house not a creature is stirring except Levi, my four-legged spouse. I have no place to go tomorrow, no dish-to-pass to make in the kitchen. No problem. I’m a big girl and I am thankful that I have a warm house and food in the refrigerator. It might not be a turkey and all the trimmings but tomorrow I won't be down at a mission depending on the good deeds of strangers to get a warm meal and a hot cup of coffee. And after the last piece of pie is served and the coffee pot is drained dry I won't get dispersed back out on the freezing cold streets and I won't be standing in line by five o'clock to get one of the limited beds down at the shelter. I can’t imagine living that way. And I do think of them often---those homeless, lost souls. Call me a bleeding heart liberal. I won’t be offended.

I’m also thankful for decades worth of warm memories of holidays spent at my mom and dad’s cottage on a lake, then later at my brother and sister-in-law’s place in a grove of white pines. I don’t think I’m looking back through rose colored glasses when I say those holidays were filled with fun and laughter. But I can acknowledge, now, what I probably didn’t fully appreciate back then that I had it easy. I wasn’t expected to help with preparing the food. I was never known for my willingness to learn my way around the kitchen so by the time my nieces and nephew came along I was on official duty to keep the kids busy and out from under the feet of the true cooks in the family. I’m sorry, Mom and Melanie I should have helped more!
My favorite holiday memories are filled with snowmobiling, sledding and snowball fights with the kids or playing in their fort in the woods or just walking along country roads. There is no way to replicate those carefree times with my family and I’m content not to try. I have over four decades of good memories to draw on before my brother's divorce and my mom's death left no one to organize big holiday meals. I did have the family to my house in the city once, but it wasn't a great situation when they all had to travel so far and my house was too small. That was the year I tried to make cranberry relish and I put fresh berries in a blender but forgot to put the top on before turning it on. Aside from cleaning cranberries off the ceiling, when I think of my best family Thanksgivings I don’t remember the food as much as the bonding time with my nieces and nephew.

Fast forward to after my husband’s stroke when we moved even farther from my family to be closer to his and we spent the next fourteen years going to the only place that was wheelchair friendly…my sister-in-law’s house. Those were super-large family get-togethers where the accent was on the food, the more the better. The women are all great cooks and the men are big eaters. Me? An early mistake of making a pink salad of potatoes and beets earned me a reputation for being a joke in the kitchen. I didn’t care. It took the pressure off me to kitchen-compete with a family who knows all the secrets to making the best of the best. They never expected much out of my dishes to pass and I delivered on their low expectations. Then my sister-in-law passed away and that ended the big holiday meals at her house. The adult kids all took their celebrations to their own homes to build new traditions with their growing families. It’s a classic story that only the elderly are privileged enough to tell. As much as some of my peers would like to, we can’t freeze our holiday gatherings like a scene in a snow globe that never changes. The best we can do is shake up our memories from time to time and watch them flutter down like the glitter inside those snow globes.

In a world so full of dark and scary things that seem beyond our control---gun violence in our schools, our climate crisis and the constitutional crisis our nation is facing to name a few things---it’s more important than ever for us to pause to be thankful for the big and small blessings in our lives. I am thankful that I’m relatively healthy, that I’ve been loved and loved back in my life, that I’ve lived a moral life with few regrets and that I have a plan for a new chapter in my life that will give me security as I age out of this world. And I am grateful for my annoyingly demanding dog, Levi, who still lacks the logic to understand that if it’s raining outside one door of the house that it’s raining outside the other two doors. He makes me prove it to him every time before he’ll finally go outside to answer nature’s call. I humor him because I still remember my reluctance to go outside to the outhouse when I was a kid spending my summers at the cottage. Have I mentioned I'm grateful for indoor plumbing and flush toilets? ©
Posted by Misadventures of Widowhood at 12:30 AM