From Christmas Movies to my Obsessions 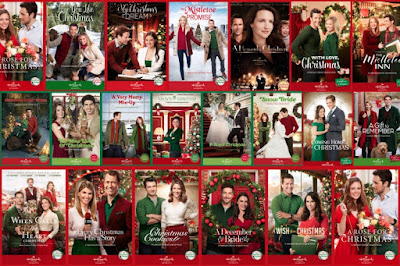 December is fast approaching and already I’ve overdosed on Christmas movies. It’s either Hallmark or LifeTime playing in the background as I try to knock things off my various to-do lists. I’ve seen most of Hallmarks' films so many times that I can walk through the room where the TV is on and know exactly where they’re at in the formula plots and keep on going. And for me, there’s comfort and tradition in that. I can’t work with the National Geographic's, animal channel or cable news on because I’d sit right down and watch. Ditto on listening to music. Music---at least my favorite genre of country/western---brings too many memories and emotions to the surface and I get lost in the lyrics never to be seen again until my stomach says it’s time to eat. I’ve tried listening to classical music around the house but darn those music appreciation classes I took way back when my hair was still dark brown. Ever since then I feel the need to sit in a chair with my eyes shut when I put on classical music and become one with the dynamics of the pieces. I can’t work to classical music. It’s too mood altering, but ALL music starts bugging me after an hour. I'm guessing I was a tribal drummer in a past life and an EKG taken while listening to music it would probably mimic a music score proving my theory. I'm just sayin'.

The Washington Post says Hallmark's Countdown to Christmas movies "tend to transport busy corporate types from cities to deeply quaint towns where they find love or, at the very least, the spirit of Christmas.” So true, the main characters are usually facing the holidays without a significant other---or are with the wrong one---and by the end of the two hours they’ve met and fallen in love. Doesn’t matter if they’re work-alcoholics or sourpusses who hates Christmas, they find love by the 24th of December and they’ll share their first kiss in film with two minutes to go before the credits roll. Seriously? How could anyone know they’re destine for a trip to the altar if they hadn’t---shall we say---even looked in the window of the milking barn to play off the adage, “No one is going to buy the cow if you give the milk away for free.” But times are changing. In two of the new-this-year Hallmarks they allowed couples a chase kiss 3/4 of the way through the movie and at the end of one of them the couple kissed their brains out---lustful, not sweet like they usually do. It was so unusual and I swear I heard someone telling them to get a room---Oops, I guess that was me. Another thing I noticed has changed this season is an abundance of inner-racial couples at LifeTime.

I only had one gift to buy this year. One for my Gathering Girls party and I bought that before Thanksgiving. I’d tell you what I got but one of the Gathering Girls occasionally reads my blog and the party is a couple of weeks off. We have a $15 limit and a rule that it has to be consumable. It’s not that easy to buy something that is used up over time and is still a welcome gift for someone when you don’t know who the percipient will be until it gets opened. (We use a game to hand them out.) One year the diabetic got a box of chocolate. Another year I gave an assortment of teas with a gingerbread cookie mix, but I got a call afterward asking if I had the receipt for the teas so she could take them back because she only likes a certain brand. I've never liked picking out gifts for anonymous recipients. I get it wrong more often than I get it right.

Unless I get snowed in I have three Christmas parties to look forward to this year: the one mentioned above, one at with my future neighbors at the continuum care campus and one at the senior hall. The smallest one with my gal pals will be the most fun although I’m anxious to go back to the CCC to get an update on the building timeline and to ask a few questions like: Will we be able to have landlines and/or cable TV? I already know that Wi-Fi will be free and can be access from anywhere on the campus inside and out and I'm guessing I'll have to be waving goodbye to landlines and cable. Boo hoo! I don’t like using a cell phone all the time. But I'll do whatever it takes to keep that landline number I've had since the 1970s including dance naked at midnight in a snow covered cemetery.

Another question I obsess about is will our smart card keys work to unlock doors in a power outage? Supposedly, we just wear the cards and our call buttons on a lanyard and doors just automatically open in front of us like Jesus parting the Red Sea. As a person who has to check twice each night to make sure the doors are locked, I find it unsettling that I won't be able to see a lock lever from across the room clearly facing right or left. And I like keys. I e-Bayed a box of 215 keys last summer---a life time of collecting them---and I still have another 25ish skeleton keys I may keep. A key is not a piece of plastic in my world. I'm turning into one of those old fogies who back in the day didn't want those newfangled electric lights in the house! Change is hard.

It’s easier for me to worry about details like plastic keys and phone numbers instead of worrying about the big stuff like will the real estate market go soft when I need it to be hard? (I should reword that sentence; it sounds too sexual and if I get a bunch of spam for escort services I'll know the cyber crawlers found this post.) Anyway, I can't control the big stuff but I can control the details. I spent twenty years of my work life troubleshooting details of every wedding I helped to plan so on the Big Day nothing went wrong with my end of the event, right down to carrying smelling salts to revive fainting brides. So don’t expect me to chill out any time soon. “Details” is my middle name. ©