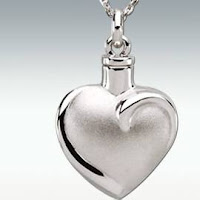 I just ordered one of those heart shaped ash urn lockets where I can put some of Don’s cremated remains and a photo. The sterling silver back will be engraved with his initials, year of his birth and death, and the words “soul mate.” I’d been looking at the Jewelry Keepsakes catalog online for a week now, trying to talk myself into waiting until things aren’t so fresh and sentimental thoughts didn’t over rule common sense. My cash flow will be better a few months and the interment of Don’s ashes won't take place at the grave site until spring so what’s the hurry, I told myself. But did I listen to my inner voice? Heck no! I can be as stubborn and she can.

When my mom passed away I held back a small amount of her ashes and I kept them in a miniature Tupperware bowl attached to a key chain, but somehow it got lost when I moved after Don’s stroke. I keep hoping against hope they’ll turn up and visions of that pitiful, lost little blue bowl were the final arguments that got me off my duff to order the locket. No one throws a piece of good jewelry in a what-not drawer like it’s a party favor given out at Tupperware parties. It would get treated with the respect it deserved. My inner voice says, “Forgive yourself already for losing Mom’s ashes! Shit happens.”

Ya, as hard as it is to admit, sometimes my inner voice is smarter than I am. But she won’t shut the heck up! I won the argument about the locket. Now she’s campaigning to hold back a whole baggie’s worth of Don’s ashes to take to Lake Michigan next summer. Don wanted the grave internment but my inner voice wants us both to also become part of the landscape---the water lapping on the shore, the wind that come off the lake and bounces around the sand dunes. My mom’s ashes were mixed with thousands of wildflower seeds and spread along a mile-long country path she loved to walk and I’ve never regretted that. It gives me peace to see the flowers that still bloom there, twenty years later.

But what comforts one person upsets another. My brother was so distraught over my mother’s directive that he couldn’t take part in spreading the ashes and ten years later when my dad died, he wanted a grave marker for the two of them. He actually dug up some dirt from where we’d spread Mom’s ashes and moved that dirt over to the grave site where my dad’s ashes were buried. He still goes there to tend the grave. Me? I’ve only been there twice in twelve years. But when I see blue cornflowers and yellow daisies growing wild, I think: “That could be part of Mom” and that makes me happy. My inner voice wants the same with Don. She wants us to be able to go to Don’s and my favorite place and be warmed by the thought that Don is now part of some of God’s best work. ©

NOTE added April14th. I found the little blue bowl containing my mom's ashes! I was looking for something else altogether and I found it in a box of keepsakes from my childhood that I got out to show my brother. When I pulled the little bowl out, he said he hadn't seen me that happy in along time. Back when I moved I must have put it in the box for safe keeping. It was safe alright...and lost for nearly twelve years!
Posted by Misadventures of Widowhood at 4:33 PM