The Church on Widow Lane 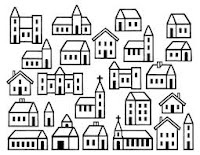 I’ve wondered at times if widowhood is easier for women who are regular churchgoers. After all, they have their church families---communities of people who supposedly care about the sick, elderly and lonely people in their congregations. But when ever I start thinking along those lines I remember a widow writing in her blog about her minister who, just days after her husband’s funeral, wanted to bring a committee over to her house to clear it out of every thing that her husband owned. The minister told her she couldn’t “get over her loss” until she did. She was so distraught over the thought of a half dozen people coming to her house to pick it over that she was thinking of changing churches if he didn’t stop badgering her. Call me cynical but my first thought was that the committee sounded like a wake of vultures picking over a dead carcass. Wow, I need a new flying rod. Look at this beauty!

I’ve never been a churchgoer unless you count the Sunday school classes my brother and I attended for a few years until we decided that exploring the near-by Indian mound was a better way to spend our Sunday mornings. My folks were not churchgoers either but they thought their kids should learn the basics and it didn’t matter to them which of the four churches within walking distance that my brother and I attended. Throw in a few summertime Bible School day camps and some religions-of-the-world type classes in college and you have the sum total of my religious upbringing. I keep waiting for a lightening bolt to strike me, to deliver a message from beyond that I’m missing something important by not going to church. So far it hasn’t come.

Friends of ours---a couple---got struck by that lightening bolt and they joined a mega-church then they totally immersed themselves in the culture of the church. Classes, committees, Christian tattoos on their bodies, daily devotions on their Facebook page and prayer cards at their place of business. To this day, they positively glow whenever they talk about their transformation. I was happy for them. They obviously needed something in their lives to anchor them but I must admit it was weird seeing this couple---one of whom had a potty mouth before finding religion---try to fine my husband fifty cents for saying the word “shit” after his stroke. Cripe, he only had a 25 word vocabulary at the time and they were trying to talk scripture with him. What did they think he was going to say? Hallelujah, amen and here’s a twenty for the collection plate? One time a faith healer was due to speak at their church and they wanted me to bring Don out to the event to have his paralysis prayed away. “Worth a try,” they said. Ya, sure, I thought but didn’t say, if I believed that I’d be down at the bank arranging for a loan to buy some ocean front property in North Dakota.

Shortly after Don passed away I was alone with him in his intensive care room when the Chaplin showed up. She asked if she could do anything to help Don “find his way home” and I said, “No, we’re not religious.” Then she asked if I minded if she said a prayer for his soul “before she walked me out to my car.” Queue the stage hands, it’s time to close the final curtain and turn another newly minted widow out of the room. I guess someone has to do it, why not a hospital Chaplin? I let her say her prayer and then I kissed Don and whispered the words that are etched in our grave marker: “Happy trails to you until we meet again.” That made the Chaplin positively beam and say something about that being a prayer in my own way. She might as well have said, “No heathens in this room! The widow believes in an after-life.” She was too young to have ever heard Roy Rogers and Dale Evans sing those words at the end of their radio and TV shows in the ‘40s and ‘50s. But she was on the right track. I do believe our souls have always been and will always be connected in the Great Beyond.

When you google the phrase ‘finding religion late in life’ it comes up with 42,500,000 hits. It’s clear I’m not the only one who wonders if that lightening bolt is going to strike. At the very first website I clicked on was the following quote by New York Times op-ed columnist, Charles Bows:

“While science, logic and reason are on the side of the nonreligious, the cold, hard facts are just so cold and hard. Yes, the evidence for evolution is irrefutable. Yes, there is a plethora of Biblical contradictions. Yes, there is mounting evidence from neuroscientists that suggests that God may be a product of the mind. Yes, yes, yes. But when is the choir going to sing? And when is the picnic? And is my child going to get a part in the holiday play?”

Bingo. Haven’t I known all along that the appeal of church is the sense of community, of family and the traditions they provide? As appealing as that is in my widowhood, to join one of the churches in the area I would have to give up my world view of religion and spirituality and the idea that there are many paths to God. Not going to happen, boys and girls! So I’ll go on being a church of one on Widow Lane. ©

Posted by Misadventures of Widowhood at 8:18 AM