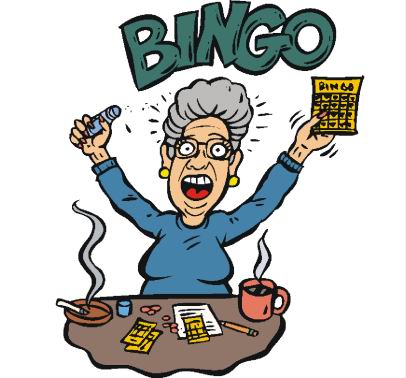 I always thought if you found me playing bingo you could just put me on a chunk of ice and let me float out to sea the way the some indigenous people used to do to their elderly who were too old to pull their weight in the tribe. So imagine my surprise when I found myself sitting with three bingo cards in front of me for the first time since I was a kid. My, how times change! These cards had sliding tabs to cover the numbers. What happened to the red bingo chips of my youth? And I hear tell they even have handheld electronic gadgets that let you keep track of dozens of cards at one time. Who knew! But I bet you’d like to know how an anti-bingo-no-not me type got roped into playing. I went to a summer potluck at the senior hall and as I was walking out the door a widow friend asked, “You’re not staying for bingo?”

“I’m not a bingo kind of person,” I replied.

“Me neither,” she said, “But I don’t have anything else to do today.”

I got out to the car, put my potluck dish on the back seat and thought: Well, shoot, I don’t have anything else to do either. So I went back inside and sat at a table with bunch of ladies from the Movie and Lunch Club. I was proud of myself because I’m generally not a spontaneous kind of person and I didn’t let my snobbish, stereotype opinion about bingo hold me back. By luck the woman sitting next to me plays bingo 3-4 times a week and she gave me a crash course on playing bingo. Corners, straight line, postage stamp, full card and bingo-the-hard-way are a few of the bingo variations that we played. I also learned she often wins between fifty and a hundred-and-fifty dollars a week playing bingo! A light bulb went on in my head. Some old people must be supplementing their income playing bingo! And here I thought they only played for soup cans and pizza kits. At the senior hall, however, a winning card only brings in one to three dollars. I went home with an extra buck in my wallet and a lot of laughs under my belt. It was fun because the people around me were fun.

Earlier in the week, though, I wasn’t laughing. I woke up with a “slipped” rib causing a stabbing pain with every move, deep breath, yawn or sneeze. Sometimes called a “floating rib” I learned that the 11th and 12th ribs are ribs that are attached to the spine but not to the sternum like all our other ribs and they can slip out of place, putting pressure on internal organs. I also learned that at one time in the history of fashion women had been known to have these ribs removed to help give them a more hour-glass figure. I would have done my own rib surgery the day my rib slipped out of place if I had had a sharp scalpel, a bone saw and someone to hold a mirror up to my back, it hurt that bad. An appointment with the chiropractor, though, took care of the pain in less than five minutes and with no blood spilled or drugs shot up my veins. It was like a mini miracle. Since all stories should have a moral or lesson to teach, this story sings the praises of keeping your core muscles strong so they and the ligaments can help keep your 11th and 12th ribs in place as you age.

Today I was back to the senior center to take a Balance Class where we’ve started doing Tai Chi moves. Or I should say kindergarten Tai Chi as our instructor calls it because we’re required to keep a chair near-by to grab should we lose our balance. Tai Chi moves have some neat names like: the white crane, calming the water, lotus flower and gathering the stars. We also learned the horse stance and the bear walk and when class was done we all thought it was a great work out. By next spring, we kidded, we’ll be good enough to do to Tai Chi barefoot in the park the way they do in the orient. We’ll have our qi (life force or energy) flowing through us because our body’s yin and yang will be in perfect balance. One class and already I can throw around the lingo (hopefully correctly). Pretty cool for an old bag of bones like me, don’t you think. ©
Posted by Misadventures of Widowhood at 1:00 AM