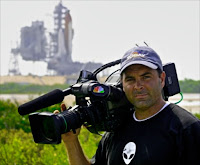 Ever hear of Dan Beckmann? I hadn’t until his non-fiction book caught my eye---How’d I get Here? And Why am I Stealing M&M's From Air Force One? I was at Amazon.com looking for something to buy that cost slightly over the amount I had to spend to qualify for free shipping. I hate paying $6 or $7 for shipping when I can buy something for a few bucks less than that and get shipping on the whole ball of wax for free. Dan Beckmann has had some amazing adventures as a columnist and a former cameraman who had worked for a bunch of alphabet places like NBC, CBS, CNN, A&E, ESPN and the BBC. He filmed extensively in war zones, covered 9-11, Hurricane Katrine and presidential campaigns, been on assignments for National Geographic’s and for NASA where he once flew in a zero gravity air craft simulator---nicknamed the Vomit Comet---with Steven Hawking. Climbing 35,000 feet over the Atlantic Ocean, Dan accidentally unplugged all the umbilical wires hooked up to Hawking causing a cascade of red flashing lights, alarms and doctors holding their breath until they figured out what happened. Beckmann has a funny way with words and he got a whole chapter out of what I just wrote about Hawking in the Vomit Comet.

When I read a book I always look for a few lines I want to “keep.” In Beckmann’s book, they came in the Epilogue: “Marvelous moments happen to us all the time. We’re just usually not present enough to be aware of them while they’re happening. Experiences feed a curiosity that carries you beyond your backyard, to find wonders big and small. Near and far. Extraordinary and ordinary. You can find adventure everywhere and anytime. Even late in your own game.”

I read those words as if they were a challenge to prove him wrong. The most extraordinary thing going on in my life lately is my fingernails seem to be growing like weeds. And the most adventurous thing to happen since April was the “something different” that I buy each week at the grocery store turned out to be a colossal waste of money. Take my word for it, don’t buy a bottle of ‘Prospectors Cold Brew Almond Maple Coffee.’ Twelve ounces for $2.99, I expected more flavor. Next week it’s back to the international aisle for my something different. Anyway, I took the find-adventure-challenge to the June senior hall luncheon where the band had partnered with Dan Beckmann to send me more messages about waking up to the special moments around us. Early on the entertainment sang a song called Always Trust Your Cape. Long story short, the song is about a little boy who puts on a flour sack cape and jumps off the garage roof. The song ends like this:

“Now, he's old and gray with a flour sack cape tied all around his dreams
And he's still jumpin' off the garage and will be till he's dead
All these years the people said, he was actin' like a kid
He did not know he could not fly and so he did
Well, he's one of those who knows that life is just a leap of faith
Spread your arms and hold your breath and always trust your cape”

The song must have inspired the woman sitting across from me because soon after that song the band played Jimmy Buffet’s Margaritaville and when they got to the line, “Searchin' for my lost shaker of salt” the woman slow-popped out of her chair and shouted out those lyrics and sat back down. I had just taken a drink of water and would have spit it out except for the hand that quickly covered my mouth. She definitely found her happy place and by the end of the song every time the band got to the salt shaker line they’d stop playing to wait for the elderly bleach blonde to slow-pop up again and shout, “Searching for my lost shaker of salt!” It may not have been extraordinary but it sure was funny. I itched to ask her why she loves that song---she’s usually exceedingly prim and proper. I’ll bet there’s a good story behind the love.

As we were all leaving the hall, I did ask another woman a bold question. She had dyed her white hair a hot pink, Not a pretty pink, more of a clown-at-work pink. “Okay,” I said, “I have to ask. Why pink?” She leaned on her walker as if the answer would take some time, “I needed a little adventure in my life,” she replied. “I’m sick of going to doctors and talking about my health!” It was downright spooky. I went to the senior hall with the challenge to find the adventure around me and what I found was two old boards who had already found some adventure into theirs. ©
Posted by Misadventures of Widowhood at 12:30 AM