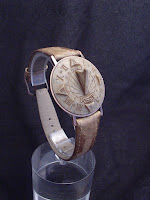 When my husband, Don, retired I gave him a Fossil brand wristwatch that had no moving parts. It was a sundial, good only when the sun is out. A few years later in his travels through an antique mall, a second hand store or flea market he came across another Fossil watch exactly like it and knowing that I suffered from sundial watch envy, he bought it for me. You could always tell when we were ready for a laid back road trip because we’d put on our Fossil sundials, take the T-tops off the Corvette, pack up the dog and drive the back roads towards Northern Michigan where there are more trees than anything else. I still have them both though I haven’t worn mine since Don died. I love the quirkiness of those watches and they had the power to strike up conversations where ever we’d go. "God winds up our sundials and the moon puts them to bed," was said a few time.

In case you need a refresher on the history of the earliest archaeological sundials, they were found in the Egypt’s Valley of the Kings and are believed to be circa 1500 BC. Wikipedia says, “Presumably, humans were telling time from shadow-lengths at an even earlier date, but this is hard to verify. In roughly 700 BC, the [Old Testament] describes a sundial — the "dial of Ahaz" mentioned in Isaiah 38:8 and II Kings (possibly the earliest account of a sundial that is anywhere to be found in history) — which was likely of Egyptian or Babylonian design.”

Recently I’ve come to wonder if a sundial watch might actually be more practical in bright light than the currently popular watches with digital screens. Clocks in cell phones aren’t much better in sunny situations. I found this out the hard way when I went on a day trip through the senior hall. Neither my Fitbit nor smart phone screens were readable as I strolled around the tourist town we visited. Thankfully, the place had a town square with a working clock because the senior hall bus waits for no one. Watches are synchronized before we get off the bus and the fear of God is drilled into us when someone on the bus invariably brings up the fact that our tour facilitator left her own mother behind when she didn’t meet the bus on time. In a foreign country, no less. My day trip reminded me of my sundial watch and on my next senior hall trip---to an out-of-state Amish quilt show---I may line my arm up with my Fitbit, my sundial and for good measure a watch or two with actually hands that go around. God knows I have enough watches in the house to choose from---Don had a watch fetish.

It was a beautiful, bright day yesterday and I could have used the sundial watch when I went to the orthopedic doctor’s office for my annual bone density scan, a full body scan done from a zillion views. (I love my bone doctor. He’s the one who tells me if insurance won’t cover yearly scans---the norm is every two years---that he’ll cover the cost.) I had looked up the options for getting to his office on Google Maps and they suggested four routes ranging from 15.1 to 16.9 miles and taking from 25 to 44 minutes. I nixed the highway route and another where I knew construction would be a problem. Surprisingly, the route I took---the 25 minute route---is very rural, a two lane road with a deep woods coming right up to the road and forming a canopy of lushness overhead. Every so often a house would open up a place to peak through to the river that the road follows and gives it its name. It’s a road that dates back to when the Indians used the river with a foot path near as their modes of transportation and there is a nature trail between the road and the river for bikers, dog walkers and joggers. Every time I’d see a patch of the trail I couldn’t help daydreaming about the Native American encampments that took place along that part of the river. People still find museum quality artifacts every so often. Needless to say, driving back and forth to the doctor put nostalgia on tap and since that was the case, I decided to have lunch at one of my husband’s favorite places, inviting his ghost to tag along for the ride. It's an out-of-the-way place we reserved for days when sundial watches slowed us down and made us more in tune with nature.

In the 21th century we all tend to forget how our ability to make observations has advanced civilizations. The sundial, for example, would have never been invented if not for the careful observations of nature nor would the cylinder-like shape of lighthouses or the principles that make helicopters fly---and who could forget the work of rock star mathematician and physicist, Isaac Newton? Observations led to the invention of music, art and science. In our ordinary lives most of us will not make civilization-changing discoveries but when we slow up enough to observe nature we can connect with the continuum of time---past, present and future. We see it in the rocks and rivers, in the valleys and mountains, in the shadows cast by the sun and the moon, and in the way living creatures take care of their young in the spring and gather supplies for the winter. ©
Posted by Misadventures of Widowhood at 12:30 AM