It’s been a busy week. Wednesday the son-I-wish-I-had spent the morning vacuuming my 1,500 square feet basement and mopping the cement floor and I did some sorting down there, earmarking five boxes for him to take upstairs to the garage. A trip to Goodwill is in my future. I was shocked that Tim only found two spiders as he worked. I hate basements! Even though this one has a daylight window and high ceilings, they are all too dark and claustrophobic for my taste. I would not have made a good cave dweller in a past life…or maybe I was one and that’s why I don’t like basements. Ya, I flirt with believing in reincarnation. It's something interesting to think about and wish for because if we’ve lived in the past then that means we’ll live again in the future, once our current life is over. I hate the thought of dying. I will not go quietly in the night.

The next day I went to a free monthly event put on by a travel club. Usually they’re classic travelogue stuff with a slide show/lecture presented by someone involved in the world-wide travel industry. This time I didn’t read the fine print in the brochure and when I walked in I discovered it wasn’t a presentation about Belgium; it was a beer tasting of Belgian beers. I don’t drink beer! But I was in Rome so I did as the Romans did and I drank six, two ounce samples of Belgian beer. On an empty stomach. Over the hour and a half I learned all about Saison, Golden Ale, Dubbels, Triples, Quadruples and Lambic with lots of wonderful word pictures painted about the quaint places in Belgian where these beers are made and consumed. I couldn’t help laughing at myself for being there in the first place so I was in a good mood right from the get-go and in an even better mood when I left. I found out that the decision I made in my early twenties about not liking the taste of beer still holds true. Except…

Except for the Lambic which was a sweet, fermented beer with raspberries that looked and tasted more like wine. God, I’d walk a mile for a full eight ounce glass of that stuff! Unfortunately, you can’t buy it here in The States. The speaker said the closest to it is a beer named Calabaza Blanca by Jolly Pumpkin and their website says it’s “spiced with orange peel and coriander, refreshingly tart, with a wonderfully dry finish.” Wine and beer aficionado language goes right over my head. All I know is I’d be tempted to suck a Lambic stain out of a table cloth. The internet is a wonderful place when it’s not being a source of disappointment. A Google search pointed out the fact that I’d have to take road trip to another part of the state to buy the American version of Lambic.

One of the ladies sitting by me at the beer tasting commented on how times have changed. Growing up in our city, it was known as the City of Churches and now we’re known as Beer City USA. The micro brewery’s, the beer tours and the restaurants that offer beer pairing meals has exploded. While I’m not particularly interested in beer or church tours they’re both so popular here it wouldn’t be surprising if the old Polish church in town started pairing home brew tastings with stained glass windows tours. The guy narrating the Belgium beer tasting said over there six beers are made and sold exclusively at monasteries. The Chimay Red Dubbeis we tasted was one of them.

Sometimes not reading the fine print on a brochure and ending up at an event that initially you have no interest in attending can turn out to be a fun, serendipitous learning experience and I think I’ve figured out why I love it when something like that happens. When I was growing up, every day after school my mom would ask, “What did you learn today?” In my younger years I’d crawl into her lap to answer but the habit of sharing what I learned was a habit that stayed with me until she died. I could never contain my joy of sharing something interesting with her or my husband and now that they're both gone, I do it in my blog.

As we age I’m guessing most of us spend some time reviewing our lives and trying to figure out how we developed our quirks and personality traits. My mom had to drop out of school at an early age but she was very pro-education, especially for women who she saw as needing to be able to make a living and have her own money so we couldn’t become victimized by hard times or irresponsible spouses. She was proud of me for being the first in the family to go to college and was deeply disappointed when I dropped out after my third year. I felt like a failure for years for not finishing and her death in a large part was instrumental in my decision to go back. Graduation day---twenty-five years after I started college---was one of the happiest days of my life. Isn't it a telling thing how much the absence of someone in your life can still have the power to influence you long after they're gone? For better or worse the imprint of a lost parent, spouse, child or friend stays deep within for our entire lives and maybe beyond. ©

“I am learning all the time. The tombstone will be my diploma.”
Eartha Kitt

I wanted to share some photos of how the nature strip in my back yard looked this morning. The first is a wider view of the other two close ups photos. My nature strip is 185' long by about 20' wide on my side of the lot line, with my neighbor to the back having an additional 10' on his side of his pines. It's well used by critters and birds year-around but especially when a 20' x 20' patch of wild raspberries (to the right of the pink flowers) are ripe. 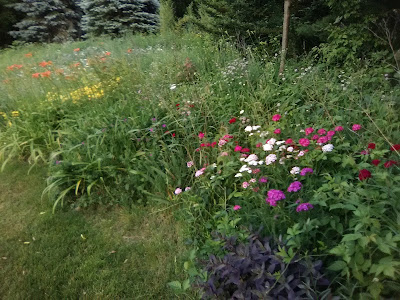 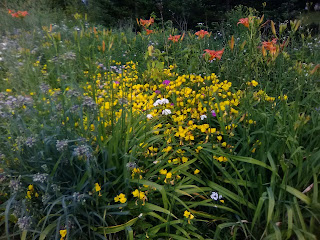 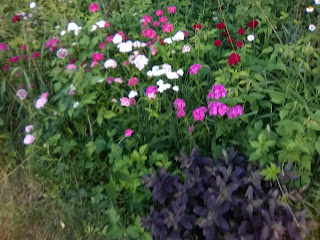 Posted by Misadventures of Widowhood at 12:34 AM