Unwanted Gifts and it's Mueller Time 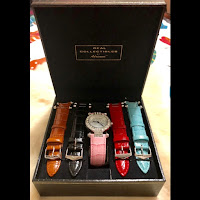 Time is passing by so fast. It’s hard to believe that December is almost half over and I just went to my second holiday party of the season. The gods of Michigan Snow are being kind to little old me who has lost her stomach for driving in Winter Wonderlands. The temperatures are bone-chilling cold, the landscape is covered with snow but the roads are down to bare asphalt. The worst place I have to drive is on my own driveway that, for reasons I can’t explain, is the only one on the entire cul-de-sac that is still snow covered. Not a lot of snow, just enough to make going to the mailbox akin to standing at the top of a ski slope wondering if you’ll make it to the bottom without falling. I put on my boots with ice fishing cleats attached and I use my husband’s old, four-footed cane for the trek. I also go to the mailbox in the late afternoon when people are coming home from work. In case I do fall, I figure I won’t have to lay there long before someone would drive by and take pity on me. My momma didn’t raise any fools.

My second Christmas party of the season took place out in the boondocks which means the weather often prevents me from going but this year when twenty of my Red Hat Society sisters gathered at an upscale restaurant to order off the menu, I was one of them. This group, without exception, always orders dessert at parties so it gets pricey. I could not believe they have desserts listed for as high as $9.50. Still, we all went home with a box with half our entrées inside and the taste of brownie, hot fudge sundaes or crème brulee on our lips.

We do a $10 gift exchange that are distributed using the Right/Left game so you don’t know who will end up with what you bring. Two other groups I belong to have the bring-only-consumable-goods  gift rule and I’ve suggested that rule to the Red Hatters. We’re all in our 70s and 80s and who needs more jewelry, scarves, candles or décor do-dads, but the suggestion falls on deaf ears. This group likes bling. Wouldn’t you know it, the gift I got at the party was a watch with exchangeable bands that I’ll never wear. “You spent more than $10 on this,” I said as I thanked the woman who bought it. She smiled and said, “I just buy what I like and I don’t care about the price.” I spent July e-Baying collectible watches out of the house and I’d re-gift this one if I could, but I can’t think of anyone who'd wear it. Google priced it at $25. For a fleeting moment it made me feel cheap for only spending $11 on my $10 exchange gift. I’m thinking of wrapping the watch back up and leaving somewhere for a stranger to find. Well, except I couldn't leave it at an airport, school, mall or theater where someone would call the bomb squad about a ticking box.

Even with consumable gifts you don’t always welcome the gift you get. Last year a diabetic got a box of chocolates in an exchange and at my Gathering Girls party I went to recently I gave an assortment of teas along with a King Arthur gingerbread cake and cookie mix arranged in a cute snowman box and the next day I got a text asking me if I had the original tea boxes and receipts. Unfortunately, the recipient doesn’t drink tea. At that party we used the stealing game to distribute gifts but our game ended before she got a chance to ‘steal’ a gift she liked better than the one she opened. Oh, well, her family does a gag gifts exchange---things like toilet bowl brushes---so hopefully, she can re-gift the tea. If not, Goodwill probably benefits after the holidays from a lot of gifts that missed their marks. Even Donald Trump Jr. was joking on TV recently that his father re-gifts to him a lot of monogrammed gifts that are given to the president.

Change of topic: I probably shouldn’t bring this up but I feel like we’re getting early Christmas gifts with the high profile sentences and pleas that came out of the courts lately. (Spoiler Alert: Trump supporters should probably quit reading here.) So far the Mueller investigation has brought 36 indictments and he’s getting closer and closer to wrapping things up. To see some of the president’s lies and cover-ups finally being exposed in the courts gives me joy. Trump’s fall from grace, I predict, will be swift once all the redacted areas in the court filings get revealed over the next six months of trials and additional indictments. I personally think Donald Jr. is going to go down hard with some prison time and his father will stand by while the bus he’ll throw junior under runs over him. And the only reason Ivanka and Jared haven’t been charged in an emolument clause case is because they aren’t getting salaries while working in the White House. But I think the domino's of justice will eventually take them down, too. If you think I’m wrong about all this, don’t tell me until after the holidays. Let me live in my cocoon of believing the Rule of Law is coming back to the White House. Do I want to see Mr. Trump get impeached? That’s a question with a complicated answer but the bottom line is, we need to wait until enough wrong doing has been proven in court that even the hardcore Republicans in the Senate are calling for his head. Now, if you ask me if he deserves to be impeached my answer would be a resounding “HELL, YES!”  ©
Posted by Misadventures of Widowhood at 12:04 AM