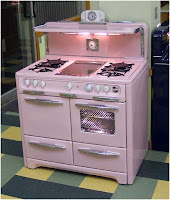 I had a whole post prepared for my mid-week commitment to this blog but during the proof-reading stage I got to wondering if I’d written about some of the same stuff in the past. So off I went to my “search this blog” feature and sure enough I’d already told the story about the house my husband bought just before we met that came with a pink kitchen stove and how he promptly hauled it off to the dump after his buddies teased him about having a bachelor pad with a pink stove---it was 1970 and guys didn’t do pink back in those days. I’d only seen that decked out GE one time but it was memorable and worth a second mention. For any new readers, though, I should say that he never replaced that stove the entire time he lived there. If his kitchen didn’t have a coffee pot and a door going out to his garage he wouldn’t have known the house even had a room that was supposedly used to prepare and eat food in.

I haven’t spent a lot of time in kitchens over my lifetime either and with the “search this blog” feature I discovered that I’ve also written about how when I was a teenager my mom would stress out over my lack of interest in learning to cook. Whenever the subject came up I was like a parrot repeating, “If you can read, you can learn to cook. When I need to learn, I will.” Later on in my twenties when I still wasn’t married with a few kids to feed, I switched to saying, “I’m looking for a man who can cook or has the money to eat out all the time.” I found the latter.

Our senior hall offers a lot of cooking classes and you’d think they wouldn’t be popular, given the fact that most of my peers have spent a life time cooking for families. I don’t take many of those classes but this week’s class on baking caught my eye. It was taught by a Le Cordon Bleu Paris trained pastry chef and I took it mostly because you get to eat what is demonstrated. The class was billed as one that would teach us how to make easy desserts for our holiday buffets from “rich, melt-in-your-mouth chocolate cakes with dark chocolate ganache to nutritious dried fruit/nut/chocolate clusters.” Heck, I had to ask Alexa what a ganache is; that’s how little I know my way around the world of baking. By the time the registration was closed they had filled up four baking classes of twenty-five each with a waiting list should anyone cancel. The senior hall recently bought a 5 x 12 foot, special overhead mirror for the cooking area so everyone can see inside the pans or bowls so it’s safe to say the cooking classes will remain on the calendar for a long time to come.

The pastry chef who taught this class had been an emergency room doctor for twenty years before deciding to give it all up and go to Paris, France and Florence, Italy to get a degree in baking. I learned a lot like the fact that my kitchen is woefully understand stocked with gear and gadgets if I truly were interest in doing some baking. I don’t have the silicone tiny molds used for making bite-sized cakes, for example, or the bowl scrappers that she said are her favorite baking tools---she has five. And did you know that those silicone molds need to sit on wire racks placed on top of cookie sheets during the baking? (The wire racks helps to circulate the warm air around the molds for a more even baking.) We also learned tips for piping batter in the molds and why using a water bath is preferable for melting chocolate over doing it in a microwave. I also don’t have a food scale; it seems that professionals all weigh ingredients rather than measure. Good to know.

I learned that chocolate ganache is to die-for and is made of heavy, boiled cream poured into soften chocolate---in a ratio of one part to one part for a medium weigh ganache. She gave us a chart that I lost on the way out of the building that broke down all the kinds of ganaches you can make by using different types of chocolate and ratios to the cream. But probably the most useful tip I learned is that she always sets her oven timer for half the time called for on a recipe at which point she turns the stuff in the oven---front to back and side to side. And for the remainder of the time she might turn the heat up or down depending on if the tops are browning too slow or fast in relationship to how the insides are baking. Many factors like the humidity in the air or the moisture of ingredients (like in fruits) can factor into baking times so you should expect to tweak the baking time for each batch of anything, even if you’d made it a million times.

She asked for suggestions for future baking classes we’d like to see and I put in a request for one on scones and biscotti. Before this class I’d already decided I want to teach myself how to make them on days when I get snowed in this winter. My mom would be proud I'm taking an interest, finally, and if my old stove pukes out I might even consider getting a pink one. I hear retro is a hot trend right now. ©
Posted by Misadventures of Widowhood at 12:30 AM