From President Ford to Nigerian Princes 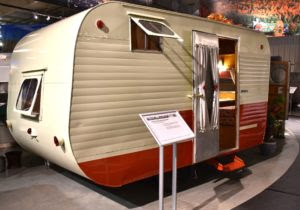 I live in President Gerald Rudolph Ford territory. The Ford Presidential Museum is near-by, his childhood homes, too, and I met the guy on many occasions when I was a kid. Ford had a camper that as near as I can remember looked like the one in the photo to the left and when he wasn’t in Washington serving one of his many terms in the House of Representatives he was in his district moving that little camper around to different neighborhoods so it was convenient for his constituents to come talk to him. He’d publish a schedule in the paper and people would line up at the door and if my memory serves me right when you got inside a kitchen timer was started so everyone one in line got an equal amount of his time. That kind of attention to his constituents is what kept him in office from 1949 through 1973. Ford was a Republican and my dad was a Democrat and a labor union representative for the factory where he worked and Dad took me with him whenever he had ‘advocacy work’ to do with Ford. Ford listened, took notes and gained my father’s respect.

I know a lot about Ford so I almost didn’t go to the Life Enrichment lecture at the senior hall about the former president. But I needed to get back into my normal routine and I did learn a few new details like the fact that “Junior” was a stutterer until the 5th grade when his teachers finally quit trying to turn the left-hander into a right hander, then the stuttering just went away on its own. I also learned he kept a copy of Robert Kipling’s poem “If” in his breast pocket every day of his adult life. As a boy his mom used to make him recite the poem if he showed any signs of a temper. She feared having a bad temper was passed on from his birth father who was physically abusive. She had left him when her son was just two weeks old.

My favorite permanent exhibit at his museum is about pop culture from the 1970s because Ford was the president during the Bicentennial and if I had to name a favorite year in my life, it would be 1976. I even had a long, loose fitting hippie-style dress with a smocked front that I made out of a light weight “homespun” cream colored fabric with small, 1976 dated flags and fireworks printed all over it. I wore it to every weekend music festival and parade we could find that summer of ’76. I still have it. As Marie Kondo would say, it gives me joy. Seeing it from time to time hanging in the back of my closet makes me want belt out a little Bellamy Brothers “...Let your love fly like a bird on a wing and let your love bind you to all living things..Just let your love flow like a mountain stream and let your love grow with the smallest of dreams..."

After the lecture I walked across the hall to go Book Club. I’ve never been less prepared for a book discussion and I didn’t even try to bluff my way through it. I’d read the book a couple of years ago and had planned on reviewing it last week but the power outage put a snare in that plan. I couldn’t concentrate on anything more complicated than putting a 500 piece jigsaw puzzle together. Yup, that’s what I did when I was cut off from media and good reading light. From the time I was a kid, if weather got in the way of something we wanted to do, we’d pull out the puzzles or games. We didn’t even have electricity in the early years at the cottage or indoor plumbing. Puzzles, Monopoly or playing poker were our ‘devices’ back in the ‘40s and early '50s.

A week ago today when I posted the short note about having to leave the house because I didn’t have heat or power someone left the following comment on that blog entry: “You Baby Boomers are the most evil generation to ever exist. You are all psychopaths. You destroyed your own children’s future, destroyed the economy and then you sit back and laugh. I hope you boomers enjoy your retirement homes! I guess what I’m really trying to say is, can you Baby Boomers hurry up and fucking drop dead?”

It was a poop-and-fly-away, cut-and-paste comment that I found on several other blogs after googling those words. It wasn’t the first time I’ve heard Millennials vs. Baby Boomers smack like that. It’s a theme that pops up on political message boards from time to time. But wouldn’t you love to know the backstory on why that particular Millennial feels so beaten down by his/her life that he/she has taken to leaving death wishes Johnny Appleseed style across the internet. I'm tempted to say, "Get a grip! Gripping about the generations before and after our own is a time-honored tradition."

But rather than get snarly about the “debate” I tend to look for the lighter side of the Millennials vs. Boomers conflict. For example: A tweet by Mrs. Math Teacher: “Baby Boomers blame Millennials for everything but WHO PUT CARPETING OVER ALL THESE HARDWOOD FLOORS?” Or this tweet by Andy Levy: "'Millennials are idiots' [says] the generation that made a millionaire out of the creator of the pet rock." And Zach Wallen's: “I love Baby Boomers who say ‘kids don’t even know how to write cursive’ in a negative way. Like ‘okay, grandma you can’t even turn your laptop on without getting six viruses and wiring half your retirement income to a Nigerian Prince.’” ©

Posted by Misadventures of Widowhood at 12:07 AM