Changing Rules at the DMV 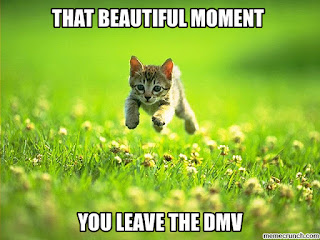 I usually renew my driver’s license by mail which I did this year as well but you can’t renew a handicap parking permit by mail for some obscure reason known only to those who work for the Department of Motor Vehicles who have screws loose in their heads. People who need handicap parking hangtags aren’t known for their physical endurance and ability to be packed inside a sardine can with a hundred plus people or for waiting in line for a ticket to enter their precious room full of hard plastic chairs, then sit for another hour or two for them to get called up to the counter. I don’t use my handicap parking tag often but when I need it, I need it so I have to play by their rules.

Last week I made my first attempt to go to the DMV. I got a couple of blocks from home when I realized I’d left my cell phone at home on the charger. What should I do? The side of my brain that wants to live dangerous had a debate with the sensible side. She said: I’ve lived better than half my life without a cell phone attached to my body. What’s one more day? I didn’t listen to what the sensible side mumbled back about random flat tires and traffic accidents. I grabbed “danger” by the throat and kept my car headed toward the DMV.

When I got there, I looked for the red sign on the wall that tells what number they called last but I couldn’t find it. I found out why when I was herded by a bank of computers where we were supposed to register. Great. I’m computer literate. I can do this, I thought. Wrong. It wanted to know your cell phone number so they can send you a text when it’s time for you to get called up to the desk to do your business. That explained the missing red sign on the wall. No cell phone, no way to advance forward. There are so many things wrong with that but it’s enough to say that I had to tuck my tail between my legs and pick my way out of the building. I felt like an antique person with a flip phone...not that there's anything wrong with that.

My second attempt to go to the DMV was on Monday morning. I figured I’d start early in the week, giving me plenty of days to get it right. I had my cell phone handy, I’d even written its number on a slip of paper because, truly, how many people have their own number memorized? I can repeat every landline number I’ve had in my entire life---which isn’t that hard to do considering there’s only been two---but all I remember about my cell number is it contains the numbers of a popular interstate highway. But this time I headed out of town to drive to a DMV twelve minutes northwest, in the middle of apple orchard country where those who work at the DMV likely all speak Spanish as well as English. I checked the computer to make sure the branch hadn’t been closed and I lucked out.

Speaking of closing up branches, my bank is switching over to one of those “digitally enhanced branches.” Which means they will no longer cash checks or allow you to withdraw or deposit cash. So what the hell are they going to do because they aren’t closing the place? There is still a full service bank in the town where I drove to get my handicap parking permit renewed. But I’m not going to drive unplowed country roads in the winter to get there nor in the fall when migrant workers explode the population of this speck of a town in the middle of nowhere. Growing up, no one would let their wives or daughters go there in the fall for fear they’d be raped at knife point. It’s utterly ridiculous to harbor a race-based fear for so many years but isn’t that what drives all stereotypes that are the root cause of systemic racism? One woman back in the early ‘50s had that experience and a whole group of innocent people were besmirched as a result. Afterward, white high school boys would go up there on a Saturday night looking for trouble and if they found it, guess which group got a slap on the hand while the others went to the county lock up. Jeez, did I get off topic.

Anyway, when I walked into the Rural Town DMV I took a paper ticket from a machine like you do at the meat counter at the grocery store and waited for my number to show up on the red sign. There were only 35 people ahead of me. I was in and out in a flash and while I was there I learned all about how the guy across from me left his short fuse at the restaurant he’d just left, and I learned if you ask an 18 month old girl to tell you what her grandpa’s tractor sounds like she’ll blow bubbles and make adorable sound-effects while putting the "tractor" through gears I’m pretty sure it doesn’t even have. She had our whole row laughing. Conversations like that wouldn’t happened at my local DMV where everyone is staring at their cell phones. At the counter I also learned that the state is talking about changing the rules and letting us renew handicapped parking permits online. Hooray! ©
Posted by Misadventures of Widowhood at 12:30 AM