It’s Mueller Time in the Suburbs 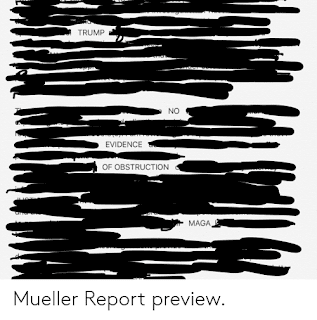 Bob Barr gave a speech a few hours before he released the redacted Mueller Report and shortly afterward I got a phone call from a decades-old friend who started yelling about how Trump was going to slip out of all his wrong doings without even a slap out on the hand and how Mueller turned out to be just another puppet for the Republican party. “Two years spent on investigating that ‘prick’ was a waste of time and money!”

My friend, W.G., went to high school with my husband and when Don died, the political conversations those two had every few weeks transferred to me but yelling is not part of our usual M.O. I tried to interject the idea that he was buying into Bob Barr’s interpretation of the Mueller’s Report and that no pundits, no Democrats and no legal experts had had a chance to look at it yet to see if Barr was puffing for the president. To which he screamed, “It’s not going to make any difference! Trump is destroying our country and they’re all going to let him do it!”

“W.G., we’re on the same side here,” I said in the calmest voice I could muster, “Let’s just let the dust settle and talk again next week and see if things look any different by then.” I didn’t add that I didn’t agree with him about Mueller’s creditably. I didn’t want to argue that or any other point in his rant. He was too upset to reason with, so I just said a few "give it some time" before finally saying "good-bye and hanging up.

Two days later I got home from the grocery store and found this message waiting for me: “I think you’re mad at me. I hope not," my friend said. "Not for voicing my political views. We’ve been friends too long. Give me a call when you get home. I want to know if you’ve started reading the Mueller Report yet.” I called him back but the phone went directly to voice mail and I left a message telling him I wasn’t mad but I was worried about him having a stroke over Trump. “I don’t think you realized how loud you were yelling at me. I’ll be home the rest of the day. Call me.”

I hung up the phone thinking, my God, if the Russian interference in our election’s sole purpose was to cause discord in our nation they sure have been successful. Then I remembered a comment I sent to the spam folder on this blog before I went to the grocery store. It was another one of those comments that claimed Baby Boomers are evil. “White people, black people, Asians, Mexicans, Indians, Chinese, millennials, GenX, GenZ. There is not one single demographic that does not hate you.” Blah, blah, blah. What if the Russian troll farms are behind that kind of disinformation, too? I see those kinds of topic threads on message boards and internet bots could leave comments like that on blogs. Human or computer generated, their whole purpose is to make Baby Boomers feel afraid and distrustful of others. But my first thought upon reading that comment was, Gee whiz, I guess I have the audacity not to be living under a bridge. Now pass me another stack of hundred dollar bills to count. The idea that the Russians are trying to pit us against each other in other areas besides our political leanings cheers me up. Why? Because that’s easier to accept than the idea that raw-hate is wide-spread in America. However, the field of cultural rifts the Russians could use to stir the pot into a frenzy is fertile and we have to be on guard against that.

It would have cheered me up if my friend would have apologized for yelling at me when he returned my call, but he didn't. He wanted to discuss the Mueller Report and he was disappointed, maybe even irritated when I told him I’m not going to read it which may or may not turn out to true. I haven’t decided yet but I have decided to back off from talking politics with him because it’s just not right to let the likes of Donald Trump come between me and one of most loyal friends my husband ever had and me by osmosis. When I had my knee replaced this guy stayed with Don and Levi while I was in the hospital. He literally wiped my husband’s butt, helped him with showers and wheelchair transfers and fixed his meals just so he wouldn’t have to go to a nursing home while I was gone and Levi wouldn’t have to go to a kennel. When others friends fell by the wayside when Don lost his mobility and speech after the stroke, W.G. kept the same, exact pattern of friendship they’d had since high school. The phone calls, the stopping by for coffee, and the meetings for an occasional meal---those things never missed a beat. That’s the kind of friendship that is worth something and it’s the kind of loyalty our president will never know.

Whatever happens or doesn’t happen to Trump in the afterglow of the Mueller Report, I don’t really care as long as he doesn't get re-elected. His daily drama-queen activities is wearing out the nation. But Trump is not the problem as I see it, the people who support him are. What I care about is how are we going to get his followers to value facts, Truth and the rule of law again? How do we get them to value voting candidates into office who are ethical and have good characters, who don't try to divide us and erode the Fourth Estate? How do we educate people to tell the difference between fake stories from troll accounts and well-researched and verifiable reports? I fear our democracy depends on doing those things. © 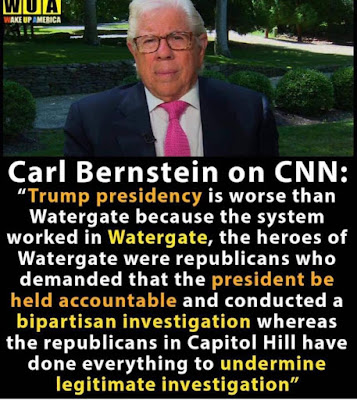 Posted by Misadventures of Widowhood at 12:16 AM