Leaving Time...or is it Time to Leave? 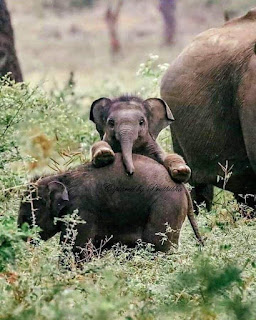 Have you read Leaving Time by Jodi Picoult? I probably shouldn’t be discussing the book in public on the chance that someone reading this has it sitting in their to-read stack. But I can’t help it. I just finished it last night and book club is a week away and I want to sort out my reactions to it. I read a few reviews this morning to see how they handled the plot twist in the last forth of the book and none of them gave away the fact that---spoiler alert!---the characters you think are alive are actually ghosts and the character/s you think are dead are not. For most of the book you think you’re reading an interesting mystery of sorts about a 13 year old girl who wants to find out why her mother ran off ten years ago and she gets a down-and-out private detective and a has-been TV psychic to help her.

The story line of the book takes place mostly at an elephant sanctuary and the mother was a researcher studying the grieving habits of elephants. I love elephants. I mean I REALLY love them! I have an elephant bell sitting four feet away from me as I type. I follow the Elephant Listening Project on Facebook. I donate to elephant causes so I was racing through this book like it was on fire. All the main characters were extremely interesting…until the big reveal and then I felt let down, disappointed. Cheated. I wanted a happy ending, not one that opens up a bigger can of worms to sort out. Jodi Picoult is a good writer and her research about the elephants was spot on and, sure, the mystery got solved by the end of the book. BUT I don’t believe in ghosts. At least 95% of me doesn’t believe in ghosts. Jodi via way of the psychic character had some interesting things to say about our after-lives for lack of a better way to describe the supposed spirits milling around our space after leaving our time.

After closing the book last night I said out loud, “Okay, Don, if you’re a ghost you’d better come by and haunt me tonight.” And he did! It wasn’t a pleasant dream that made me wake up smiling and trying to hold on to that haziness as long as possible. Nope. I woke up in a panic. I’d been running from an elephant chasing me and Don was on a motorcycle behind the elephant driving him to me. I remember my dreams often enough that I have the dream dictionary bookmarked on my computer and this is what I found: “Dreaming of an elephant coming towards you at an unstoppable speed means that you are going to face a situation that you cannot control. You have to let things be and wish that it will all work out in the end.” I’m guessing the “situation I can’t control” is the fact that I’m going to die one day and I’m really not in the mood to go any time soon. And I don’t even want to guess why I dreamed that Don was herding the elephant in my direction.

Change of topic: The next morning I loaded up the back of my Chevy Trax with things left over from my recent redecorating project. I had so much stuff the back bumper was dragging on the ground. A slight exaggeration, but it was a big load that included eight sets of sheets for twin beds. I had sets in red, black, and gray---prints, solids, flannel and jersey. I didn’t even know I had so many sets stuck on the top shelf of my closet. I also took a whole trash bag full of towels sets in the same colors and two boxes full of stuff I knew if I didn’t get them out of the house right away, I’d be tempted to keep them in the garage until they grew roots. I set aside all the framed photographs I had in my bedroom with plans to hang them on the pegboard wall in the garage where my husband’s collection of gas station memorabilia was displayed. Why not? These are my people. I’ll see them more often in the garage than I will if I un-frame them and put the photos in albums.

After dropping off my loot at Goodwill I headed north five miles to the tourist town where my husband grew up and my Mad Hatters Society sisters meet the first Wednesday of every month. But I was a half hour early so I back-tracked a couple of blocks to make an early visit at the cemetery---I usually don't go until May. I had dug the sod out around Don’s tombstone last fall and I was surprised to see the ‘ditch’ filled up with pine cones and pine needles still attached to small branches. Holy crap, that pine sap is sticky! I’d forgotten about that. It was a common childhood curse at the cottage where we kids played cowboys and Indians in the woods behind the lake. Back then, mom used gasoline to get pine pitch off our skin and out of our hair. I wasn’t about to try to get some gas out of my Chevy Trax so I tried the only liquid I had in the car besides water---Windex. To my shock, it took the pine sap off my fingers.

When I left the cemetery I told my husband---just in case he does happen to be a ghost and was hanging around---that I’m not speaking to him until he apologizes for trying to get me trampled by an elephant which, by the way, is how someone in the Leaving Time book died. But for a while, you're really not sure which character it was who got her head crushed under the elephant's foot. ©
Posted by Misadventures of Widowhood at 12:10 AM