Poor People Past and Present 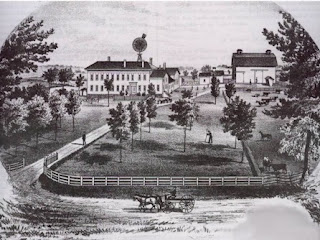 I do it to myself every April. I over schedule myself. This year I have 22 appointments or events on my day planner for this month and part of that is because it’s the end of winter when some biannual stuff needs to take place: a trip to dentist and the internist, an irrigation system turn on/off. Then there are the repeating stuff that happens every month: haircuts and dog grooming, two gal pal brunches and two Mad Hatter teas, book club, and the Movie and Lunch Club. I also add to the schedule senior hall events when their newsletter comes out and it’s time to email RSVPs for spring. Who, for example, could pass up a lecture on the history of the poor farms in Michigan? Uh-oh, am I seeing a bunch hands raised out there at the other end of this internet connection? (I need an eye rolling emoji here.)

Actually the poor farm lecture was extremely well attended. Although some of the people there might have missed the part about it being a lecture about history and thought it was about a place we could sign up to go to live out our final days. Either way when the speaker---a research librarian---asked for a show of hands on how many people had a family connection to a poor farm or poor house about of forth of the crowd responded with an affirmative hand in the air. Imagine my shock when one of my ancestors was later named as a keeper of one of the county poor farms in 1857 but thankfully he was not one of the keepers embroiled in a scandal that made the local newspaper. Scandals like the keeper who butchered a disease-ridden cow and fed it to the people in his care. A lot scandals were going on back when the state was paying twenty-five cents a day per person to house and feed the poor.

I was also surprised at how far back there has been public funding and support in the United States for caring for people who couldn’t take care of themselves---laws have been on the books mandating care as far back as the 1830s. Unfortunately, it wasn’t until the first third of the 1900s before they started separating the mental ill from the physically ill so I would imagine the term ‘snake pit’ would have aptly applied to some of these places. Although from what I’m been able to learn the term snake pit to describe a place where groups of sick people lived in deplorable conditions wasn’t used until the 1940s, popularized by the book and movie, The Snake Pit. Both were based on the true story of a woman’s experiences living in a state mental institution. I remember seeing that movie and it scared the crap out of me.

Anyway, back on point. It was not a boring lecture by any stretch of the imagination but I found one fact particularly interested in the light of what’s going on now at our southern border. The poor farms and poor houses separated children from their parents. A man and wife could reside in the same place only in different wings set up for men and women but the kids, if they were old enough, were ‘farmed out’ to work and live in the community and the babies were given to those who wanted them which was what happened to my mom and her siblings when their mother died. People who lived at these poor farms were expected to work if they were able---either in the gardens or fields, the kitchen or laundry or to clean. And when they died they often ended up in unmarked graves. Sometimes they were given train tickets to go back to the counties where they were born, since by law each county was mandated to care for their own poor.

When you think about it, we’ve been a nation that has tried to care for the down and outers for a very long time, and I personally believe the resentment of doing so now is a new ‘phenomenon’ in this century. Maybe because we’re losing the Christian/Judeo ethics we once prided ourselves on having as a nation that makes it easier for some to justify why they belong in the group of haves and others belong in a group of have nots. Maybe because we no longer send the poor off to live in group housing---out of sight, out of mind---that we think we have the right judge whether or not someone truly needs public assistance. Or maybe we’ve grown too cynical to trust the system to make those judgements. Maybe we’re so far removed from knowing people who lost it all through no fault of their own that we’ve become less compassionate about individual hard-luck stories. Famine and World Wars of past centuries, the Dust Bowl, the Great Depression touched our grandparents and other ancestors more deeply than the generations to follow. Could that be it? Who knows why the resentment of the poor is out there, but we were just told by our president that our country is “full” and we can no longer take in “…your tired, your poor, your huddled masses yearning to breathe free…” and if I could find that eye rolling emoji in my Word program I’d end this post with a baker’s dozen of them.  ©

NOTE: Drawing at the top is of the poor farm in Calhoun County Michigan
Posted by Misadventures of Widowhood at 12:30 AM