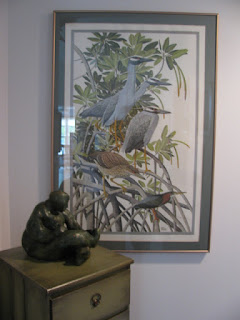 Used as a noun, potpourri is usually thought of as a mixture of dried flower pedals and spices kept in a jar or mesh bag for their fragrance. But a potpourri can also be a collection of miscellaneous objects or subjects, even a musical medley. To the best of my knowledge no one has a computer that can dispense or detect smells so the potpourri in my title is obviously not the pedals and spices type. So what’s a potpourri post? I’m glad you asked. It’s a post with no central topic, just a collection of unrelated things to dump into cyberspace because that’s the way my brain is rolling today---nothing focused, nothing over-developed to the point of ad nauseam.

I’ll start by finishing a train of thought I mentioned in my last post regarding the new “digitally enhanced bank” in my neighborhood that is replacing a full service branch. I still can’t get past the fact that a BANK will no longer deal with cash. The powers that be really do want us all to quit using the green folding stuff. There’s even a few places in town that refuse cash as payment to eat there. I can play tit-for-tat with the best of them so I refuse to go to those restaurants. However, I will admit that I’m in the minority. Between my Lunch and Movie Club, the Mad Hatters and the Gathering Girls, I go out with a lot of women for lunches and I’m guessing two-thirds of them use a credit card. I’ve turned into a fuddy-duddy haven’t I, who refuses to hop on the train of progress.

Next item in my potpourri: I learned how to do something new and exciting this week that has made a huge difference in my life. I changed the settings on my mouse pointer so that it’s a bigger, slower arrow and it’s a solid black over white pages that changes to a contrasting color if it passes over anything dark. Google can teach you how to do anything. I also learned not to pick up what looks like a chocolate sprinkle from a Nestle’s Lil’ Drums Drumstick and put it in your mouth. When I did that this week it turned out to be a ball of ink that must have come off the end of a ballpoint pen. It instantly turned my entire mouth and fingers black. Thankfully, it came off my tongue with toothpaste and a lot of scrubbing. That should teach me not to eat while working at my desk where crumbs are too inviting. The next day I had a bi-annual appointment with my internist and it would have been hard to explain why I ate an ink ball.

For spices in my potpourri I’ve been watching the parade of nightly town halls on CNN featuring the Democratic presidential candidates running for president. I’m fearful of the process of paring that long list down to the viable people who can actually win AND do a good job of bringing dignity and brain-power back to the White House. So far I’m putting my money on---in no particular order---Cory Booker, Kamala Harris, Kirsten Gillibrand, Julian Castro and Beto O’Rourke. Elizabeth Warren, Bernie Sanders and Joe Biden make me nervous because they’ve been in public life so long they’ll be spending all their time on the campaign trail defending past decisions in a political climate where those decisions are judged by today’s standards and not the standards of the past. Like Warren, for example, before DNA testing was the thing to do, who didn’t just accept the oral family history that was passed down by our parents and grandparents? No one, that's who.

Every potpourri needs a recipe---well, I would assume so. I’ve never made potpourri except for this ‘Potpourri Post’ which more accurately should have been named ‘Six Topics, One Post’ but I’ve never been good at naming any of my creative endeavors except for maybe “Toe Joe.” Who Toe Joe? He’s a clay sculpture I made back in college that’s had a place of honor in my house ever since. He inspects his toe while cursing his creator for making him so fat.

I write these posts twice a week faithfully to exercise my dyslexic brain although it wasn’t always true when I first stated blogging back near the turn of the century. Back then I fancied myself as having some useful advice and humor to share with caregivers, and then after Don died I was sharing antidotes to make myself and other widows feel less alone in our plight to feel whole again. Now, I would say that isn’t entirely possible for many of us, but a shirttail relative disagrees. After a long and reportedly happy marriage she’s jumping back into the marriage sack and it only took her two years of bemoaning the lonely state of her life to find another guy. Oh, and he happens to live right next door and she's giving her house to her retired kids. Something must be wrong with me because living with Toe Joe and Levi the Mighty Schnauzer is all the testosterone I’m interested in blending with my hormones. ©

NOTE: Yup, that's Toe Joe in the photo above.