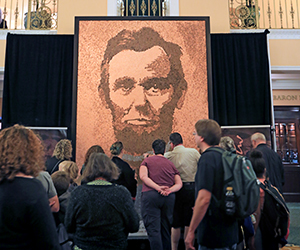 It was five months after my husband’s stroke when my friend Tim and I were cleaning out one of the two basements we had to empty out to get the houses up for sale when we found two, ten gallon milk cans filled with pennies. I knew Don saved pennies but I had no idea he had so many in the basement in addition to the five pound coffee cans full we found in the garage and in his office. Tim and I had a rule that everything we brought upstairs had to be run past Don who sat in the driveway in his wheelchair before anything could be put in either in a trailer headed to an auction house or in the back of our pickup truck going to a storage unit.

Don only had a two word vocabulary at that point in time---"yes" and "no"---but neither was reliable so it took asking the same question a few times before we’d get the right answer. ("Are you a girl?" "Yes." "Are you a girl?" "Yes?" "Are you a girl?" "No!") I’m pretty sure Don thought he was going to make a full recovery and resume his prior life so he didn’t want to let go of much. Tim and I knew better. He’d lost the use of his whole right side and his ability to speak and write so Tim and I didn’t want him to think he’d also lost total control over his ‘stuff’ thus 'The Rule.' It was a long, stressful process for all of us because Don had to be cajoled into letting go of quite a few things. That was Tim’s specialty. But no matter what either one of us said to Don he wouldn’t let those milk or coffee cans full of coins go off to the auction house or the bank.

Nope, Don had other ideas. The coffee cans came back to the apartment. (Neither house couldn't be retrofitted for a wheelchair, in case you're wondering...) He wanted to look at every single one of those pennies before I was allowed to roll them up and take them to the bank. I made a list of key dates to look for, set up a card table and I rough sorted the coins one batch at a time by decades, then by year at which point he took over looking for mint marks and error strikes. We had quite the operation going. When the coffee can coins were finally all sorted, I’d take trips to our storage unit to scoop more batches of pennies out of the milk cans.

This went on for months in our spare time which was in short supply because most of our days were filled with outpatient physical, occupational or speech therapies plus doctor appointments. Not to mention when Don was down for his afternoon nap I was back at the houses packing and cleaning or meeting with our builder. When the last shoe box full of rolled pennies was taken to the bank and all the collectible ones set in collector albums and sleeves, I rejoiced. I made a vow I’d never let pennies accumulate in the house again. And I still don't; I'm that old person in line who counts out the exact change for purchases whenever possible, but I also don’t just throw my pennies in dish by cash registers either. They add up! I’d forgotten how much green money I got from the bank for all those pennies but it was measured in thousands rather than hundreds.

Fast forward to today when I went to a lecture given by a guy who won a $200,000 cash prize for making a piece of art out of all pennies---24,576 pennies. Oh! My! God! Could I identify with his process of sorting and taking pennies back and forth to the bank by the poundage he could carry. Only he was sorting by a range of colors instead of dates---burnt umber, rosy brown, russet, chocolate, auburn, bronze and sepia. WWII pennies which have no copper in them because it was needed to make the shells of ammunitions the artist had to buy because he didn’t find a single zinc coated steel penny, but fifteen years earlier in our sort we found over a dozen. He used them for the shirt on his eight by twelve foot portrait of Abraham Lincoln.

1,347 art pieces had been entered the year A Lincoln won in our annual Art Prize. 327,814 votes were cast from the public to narrow it down to the top twenty art pieces then the voting started all over again. The top 20 drew 72,000 votes with A Lincoln taking the grand prize. Art critics snubbed the people’s choice. They always do so one year they chanaged the rules so that a panel of five professional art critics picked one winner and the public vote picked another each with its own cash prize. Only once did the art panel and the public pick the same piece and that person got an obscene amount of prize money. I didn’t get to see A Lincoln in person but that didn’t stop me from thoroughly enjoying this lecture. Hearing about the process from how a jar of coins on a dresser inspired the idea to carrying out the logistics of working on something so large and heavy was fascinating. The artist figured he had about $4,000 invested in making the piece which isn’t bad considering it brought him a $200,000 check for his 465 hours of gluing pennies into a portrait.

One of the benefits (or curses) of growing old is the way things in the present can bring forth so many memories of days gone by. I’d grown used to seeing pennies without being reminded of the Great Penny Sort but spending an hour listening to another person talk about his fascinating of the copper coins was a reminder of how I got the penny albums I’ll need to sell at some point in my downsizing venture.   ©