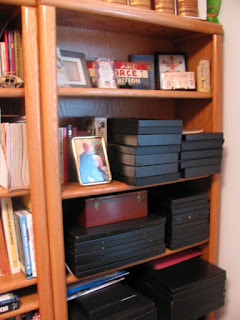 My life is rolling along at a pretty good clip now that fall is here. All my biannual doctor appointments are coming up, plus the yard and car both take time up with biannual maintenance. Then there is the Big Purge that has taken over my life. I just sent my fourth load of stuff off to the auction house which included a ton of tools. As Tim---the son-I-wish-I had---said, “Don didn’t buy cheap tools so these should bring good money.” And they did. I sold Don’s stainless steel tool cart to Tim and that’s gone too. So far neither one of us has laid out any cash to the other; he works at $35 an hour but he’s been buying stuff at about the same rate. Fine by me.

He spied a glass canister set today on my Hoosier cabinet (circa 1900) that he wanted and I told him I’d barter it for vintage zinc topped canning jars, which in his line of business he finds all the time. Ever since I visited Dawn’s blog and saw all the neat things she displays in canning jars I’ve been lusting after a couple to display my Cracker Jack plastic and metal toys in. I’ve already got collectible marbles inside a few zinc topped jars that I’m taking with me when I move but I’ll have room for a few more. I also have a collection of wooden nickels that I’ll put in a jar. When little kids come over they always want to take some nickels home and while most aren’t worth more than a buck I have an even hundred with no duplicates and I want to keep it that way. A jar of wooden nickels instead of on a tray will keep the pilfering at bay.

This may be my last lot of stuff to go to the auction house---at least to this, no reserve auction house---because all the junkier stuff is now gone from the basement and garage and the good stuff won’t be sold there if I can help it. Although I can't complain about the bidding war the auction house had on my 1976 bottle of bourbon. It closed at $228. Next up for the Tim and Jean Dream Team is making a list of all the art in the house and start the research on where to sell it. That will be his job. Why? Because if he wants to branch out his business to include helping people downsize and he’ll need to know how to deal with all aspects of what he might run across in homes. And the timing is right because Tim’s heart surgery happened this week and he’ll have to take it easy for the next two weeks.

I’ve also job assigned him the project of putting my ice cream parlor cash register (circa 1906) back together so we can e-Bay it. One day I came home to find my husband had taken the sales counter on it apart for reasons I still don’t know but being he only had the use of one arm/hand he couldn’t get it back together. Boy, was I mad! I put all the screws in a pill bottle, put the bottle in the drawer of the cash register, closed the lid that hid the counter and I forgot about his misdeed until I decided to sell it. Tim thinks my husband wanted to clean the counter because it was the only part of the register that wasn’t shiny and that might be true. I bought that cash register in the ‘60s and one year in the ‘70s for a birthday gift Don kidnapped it and sent it off to Chicago to have the brass re-plated.

After the cash register came back it looked so good Don didn’t want to give it back and it sat in his office a couple of months until I pitched a fit and made him put it in a place of honor in the living room. I adore that piece but I don’t want anything decorative in my next place that I can’t lift. Still, I love the memories attached to that cash register including how my dad couldn’t walk past it without pressing the ‘no sale’ key and putting a quarter inside. I feel awful that I didn’t take a photo of it as it sat by the door leading into my library. Tim took it to his house so I’ll have to wait until he lists it and then I’ll nab a copy of his listing photo.

I did take a photo of one of six bookshelves in my library (above) before I started a selling friendzy of the black bug boxes. They aren't filled with mounted bugs but the nickname comes from the Victorian era when this style display box were first made for the then popular hobby. Mine are/were fulled of small stuff like union pins, political pinbacks, stick pins, watch fobs, metal oil change reminders, WWII photo ID badges, service awards, fountain pens, mechanical pencils, Moose Lodge and military insignias, etc., etc. A different collection is in each box. My husband had an eye for finding this kind of stuff but it wasn’t until after his stroke and we moved into our new house that we spent evenings cleaning and sorting them into any kind of order and I mounted them in display boxes. Like the maps I finished up selling a few weeks ago, I’ve been feeding these boxes to e-Bay a few at a time.

And thus you’ve just read another chapter in The Downsizing Saga book I seem to be writing in my blog. Will I finish in time for the move? Will there be a conflict three-fourths of the way through the process to be resolved before the final chapter? Only the Shadow knows... and if you're under 70 you probably won't get that 'shadow' reference. I'm barely old enough to remember The Shadow radio series, but it's something my husband and I said to one another on occasion when an answer was unknowable. ©