From Postage Stamps to Fountain Pens 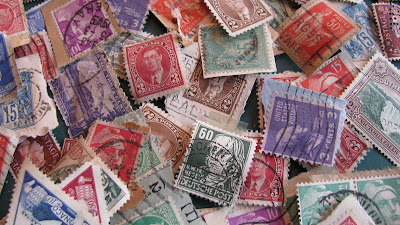 Downsizing comes in four forms for me. 1) Selling collectibles that are well worth the time it takes like the western memorabilia stuff I sold last summer, 2) donating the household goods to Goodwill that I no longer use like small kitchen appliances, 3) giving stuff away because I want to see it stay in the family like the wicker suitcase that held all my grandfather’s worldly possessions when he immigrated here in the late 1800s, and 4) the category of downsizing that I call Jean’s Antique Adoption Center. This latter category of downsizing covers old things with an obscure market but they have a history that deserves to be preserved by someone who appreciates it like the Fisher Body Neapolitan Coach I blogged about last fall. The Adoption Center also covers collectibles that my husband and/or I once invested a lot of time or money in. However, the resale market is all but gone yet I’m still sentimentally attached and can’t bring myself to just trash the stuff. My lasted project falls in the latter category. I’ve been working on ‘stamp adoptions’ for the past three days but unlike the Coach I sold for a huge profit, the sales that will be generated out of a 9” x 16” x 22” plastic box of postage stamps will be at a loss. If I can even find buyers. Stamp collecting in America is all but dead and there is a glut of sheets, blocks and single stamps listed on e-Bay.

Before we met in 1970, both my husband and collected stamps as teens and our early twenties that we carefully soaked off envelopes or bought by mail order and using stamp hinges, we placed them in our Harris albums. It was a time intense hobby. After we met we switched from buying single stamps and started buying sheets and blocks, thinking they’d be good investments. And in our defense, it might have turned out that way if the internet hadn’t come alone to slowly choke the life out of the U.S. mail service. By the ‘80s we quit buying stamps altogether but we still tore stamps off envelopes that came in mail but otherwise we ignored the hobby. Nineteen years ago, when Don had his stroke and we moved into this house the box of stamps got put in the basement and hadn’t been touched since this week when I bit the bullet to do The Great Stamp Sort.

Three days of sorting, writing up auction descriptions, photographing postage stamps and prepping them to ship, I now have 30 lots of stamps ready to list on e-Bay. It was probably a waste three days of my life to put that much effort into this project. I probably should have just said to myself, "These have served their purpose back in their day" and put them in the recycling bid or sent the box to the auction house where someone might not know they’d be bidding on albatross. But I like the idea that I’ll be coming full circle and giving the stamps a fighting chance to find new homes. The unused stamps I’ll list at half their face value just to stand out from all the others online. The big three mail order stamp companies are still in business and they might be attracted by the price when they can see a bigger profit in selling them overseas. And my two huge foreign lots from the first half of the 20th century might do well enough to make the effort worth the trouble but I’m not counting my chickens before they’re hatched. However, I've got to admit that my "Great Stamp Sort brought back the thrill of the hunt that attracted me to the hobby in the first place, especially when I mistakenly thought I'd found an error stamp worth over $2,000. It was so cool until I found an article online on how to tell the recalled error stamp from the corrected issue.

I’m getting close to the end of my sorting collectibles projects. I have a Cracker Jack metal and plastic toys collection but that’s been sorted into dates for thirty years. It doesn’t take up much room and it still "brings me joy." I'll keep that if I can. Same with half my seashell collection and the ones that don't make the cut will go to Goodwill. Other than that, I only have a couple more, small collections to deal with and before the winter is over I hope that stuff will be photographed, written up and ready to list in the spring. At least that's the plan. I'm working on political pinbacks now.

But the sort/sell job I’ll be leaving for last or maybe even after I move is fountain pens. Before my husband’s stroke he accumulated a small collection (under two dozen) of the fancy ones---marble, exotic woods, floaters and others that are still holding their values. After Don's stroke when we could no long go on collecting safaris his instinct to collect was still there. He’d pick up free ballpoint pens from offices or where ever. More than a few times he even pulled pens out of doctor’s pockets and admired them to the point the doctors would give them to him. You’d be surprised how many give-away pens a person in a wheelchair can collect in twelve and a half years. Of course the post-stroke ballpoint pens have no value and ever since Don died nearly eight years ago I’ve been reverse, un-collecting them; every time I leave the house I stick a few pens in my purse and leave one behind whenever I write a check. I’ve enjoyed my secret life as The Pen Fairy and I'm outing myself now because I've only got about two dozen yet to go. ©
Posted by Misadventures of Widowhood at 12:12 AM