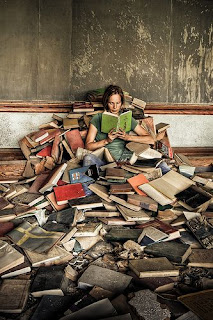 I’ve gone into avoidance mode…avoiding the woes around the world, in my house and in my head. I’m pigging out on trash books not to be confused with trashy books. Although at Christmas I accidentally got one of those when I was searching for free reads on Kindle. It was supposed to be an anthology of twelve holiday romances but two stories into the book I ended up removing it from my device because it was two rungs below ‘erotica’---just rude, crude and raw sex scenes strung together. I’m not a prude by any stretch of the imagination. I could list two dozen alternative names for the body parts most of us hide behind our underwear but just because you have your characters “do it” in front of a Christmas tree doesn’t make it a holiday romance. It ticks me out when book sellers miss-represent genre fiction. I don’t like getting snooker like that. And yes, I'm complaining about a free book which isn't fair, but we're not slicing pie for Boy Scouts here where fairness really counts.

Not wanting to take a chance on another so-called romance genre book I picked a free mystery from Amazon, called Honeymoon Cottage by Barbara Cool Lee. It was okay if you’re looking for mindless fodder to keep you from thinking about your personal woes. And that’s exactly what I was looking for. But it bugged that heck out of me that the author had the living room of the cottage facing the road, the kitchen facing the ocean and she called the beach side of the cottage the back yard. Any realtor who sells property on water will tell you that the road side of cottages are always the back and the water sides are the fronts. But when you get the cheap books at Amazon you’re often getting self-published stuff with no editors to point out annoying errors like that.

After that book I found myself at the dollar store standing in front of a rack of books and the author Julie Garwood caught my attention. I used to read her years ago, she was one of my favorite romance authors but the book in front of me, Wired, was classified as a “sexy, suspense novel.” It was about an FBI agent who was protecting a computer geek who ended up working in the cyber crime unit after they solved a few crimes together and fell in love. Julie still writes in a fashion that pleases me and the book turned me on to reading another FBI themed book titled Perilous Trust by Barbara Feethy which reminded me that in my caregiver days I loved reading ‘witness protection’ themed books, especially if the witness was relocated to an Amish community or a Cape Cod cottage. Ya, I know what you’re thinking. I should be reading the classics or something on the Times Best Sellers list. In my defense, when my problems build up to the point that I daydream about running away from home I want the kind of predictable plots you only get from genre fiction. On the outside I may have been Caregiver Extraordinaire but on the inside I was day-dreaming about someone taking care of me for a change, and I'm still attracted to the idea of someone watching my back if I ever get to milk cows or paint at the seashore. I want my very own U.S. Marshall from WITSEC, damn it! Is that too much to ask for? Well, ya, it is since I haven't personally witnessed a mob hit or a high crime or misdemeanor.

I finished Barbara’s book and was back on Amazon looking for another cheap read and this time I was attracted to a $.99 book in the Sci-Fi genre by Ken Lozito. I looked up the publishing company to see if his nine space-themed books are self-published. They are and he owns the company. But book one in his ‘first colony’ series had 1,759 reviews with an average of 4 ½ stars so what did I have to lose? I’ve never read a ‘first colony’ genre book before so I had nothing to compare it to, but I liked it well enough to order the second book in the series for $4.99. I had to push myself to finish reading that book and by the time I was done my head was swimming in computer coding geek talk and military tactics. I can now safely say that wars fought in space are not my thing. I can also say if our world comes to an end in my lifetime I will not hop on an airship to go start a colony on another planet. Try as we might, human nature is human nature and we can’t leave it behind like a jackknife that the airport won’t let get past security. We've proven this point over and over again since Biblical times. Human beings will always be capable of love or hate, of petty jealousy or selfless generosity, and being a predator or a protector.

I shouldn’t be reading at all, it’s keeping me up too late and I can’t avoid the elephant-in-the-room that stalks around in my Januaries much longer anyway…the sadiversary of my husband’s passing. But I call tell you one book I won’t be reading---a book self-published by a woman who gave a lecture at the senior hall. She labeled her lecture a “Tribute to Detroit” and advertised it as “a photo journey through the Motor City now and then.” But what it really was was a marketing ploy to sell her book which was set in Detroit in the 1930s. All her photos related to the locations in various scenes in her book---a bait-and-switch book author talk. A cleaver way to lead people into her web and, heck, I was even thinking about buying her book until the very end when she read the description on her book's back cover revealing that the main characters are vampires. I don’t care how much I need a distraction I'd count the scales on a dead mackerel before I'd ever read a vampire book! The author's job before she retired was in the marketing department at Amway, my favorite locally based, international company to badmouth. She learned deception from the best.

After the lecture I went out for lunch with a couple of friends. We were all disappointed in the lecture for different reasons but we had a lively conversation which helped me begin the ascension out of my funk. One more week of trash books for me and I'll officially push the reset button in my head. ©
Posted by Misadventures of Widowhood at 12:30 AM