Tales from the Downsizing Front 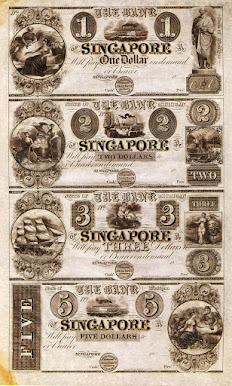 Okay, now that I’ve finished selling off a collection of my husband’s that I didn’t want to talk about publicly until every last piece was out of the house I can finally announce that I've add another notch to my downsizing belt. It took me eight weeks of researching and sending off batches of coins and paper money to various places to sell, but I finally made it all disappear. Give me a “Hip, hip hooray!” Some went to e-Bay, some to the local auction house but the majority went to a coin shop. I could have made more money if I’d e-Bayed more and sold less to the coin shop but I’m so burned out on e-Baying, that I had to make a decision: Less money with quick, easy sales vs. e-Baying and shipping for another six-nine months.

The coin shop guy got some great deals and I’m okay with that. For example one $10 banknote I sold to him for $500 he’ll be able to turn for $1,000-$1,500 but he’ll work for it---grading it, babysitting listings and taking the risk that someone will buy it then send him back a photocopy while a refund is issued with the no questions asked return policy most online auctions have these days. He can also get banknotes certified and encased in plastic so the bait-and-switch scam is harder to pull off. He, of course, doesn’t mess around with e-Bay. There are better, specialties auctions to use and I wasn’t willing to spend the rest of my life learning my way around them. I'd researched the two best known international money auction houses, followed some of their auctions for weeks, sent them some photos of what I had and learned the turn-around was over a year from the time you send them stuff and you get paid. A lot can go wrong in a year.

I only kept one banknote, an 1857 $2 bill from a town along Lake Michigan that no longer exists called Singapore. Yup, at one time many towns had a bank that issued their own paper money. I kept this one because some of my husband’s ashes are spread in the dunes where the town once stood. Singapore Michigan was once a port town that Wikipedia says the founder has hoped would, “…rival Chicago and Milwaukee. At its height, the town boasted of three mills, two hotels, several general stores, a renowned bank, and was home to Michigan's first schoolhouse. In total, the town consisted of 23 buildings and two sawmills.” (That third mill was a small flour mill.) Then came the Great Fires of Chicago that caused sparks to travel across the Big Lake and destroy much of Michigan’s coastal areas, and by 1871 Singapore was in ruins. To this day those ruins are buried beneath the sand dunes at the mouth of the Kalamazoo River in Saugatuck Township.

My husband’s family once owned a house that was buried under the sand dunes of Singapore and he grew up with stories of family members going there for summer picnics and camping when the third story attic of the house was still visible. He owned every Ghost Town book printed that mentioned Singapore and we spent a lot of time trying to track down the ownership of that house and property…visiting relatives, looking through photo albums and going to county records offices. He wanted to buy that property in the worst way and I will admit that I got bored on all those wild goose chases we went on trying to find out what happened to property after the fire. Records were lost, burned or buried, the land where the house once stood got land-locked in the 1900s but Don’s imagination and love of the Singapore mystique never wavered. I’ll bet he never imagined part of his ashes would one day be part of the dunes, scattered in the winds from the tallest dune just off the water’s edge and hopefully they got carried a few dunes back to where the house got buried. The things we do for love. (And Cindy, if you're reading this, thank you for helping me make that happen for Don. I'm not sure you ever knew the full story of Don's connection to the area.)

In good condition (which mine is not) the Singapore banknote is only worth around $100 if I were to sell on the retail market and $35 if I had sold it wholesale to the coin shop. As I sat there after the guy's offer, I just couldn’t say “okay” and I couldn’t make myself dicker for higher offer. So now the bill will become another project because I’ll probably frame it and making that decision made me regret that I didn’t keep at least one of Don’s ghost towns of Michigan books to display nearby. Oh, well, who would have ever guessed I’d get sentimental over an 1857 banknote.

People keep praising me on how much I’ve downsized and I get that. But what they don’t understand is that what I’ve been downsizing isn’t the normal stuff people downsize with a move. It’s been mostly collectables and I have STILL have to do the normal stuff people have to let go of to move to a smaller home…furniture, dishes, art, clothing and other household stuff, etc. And let me tell you, I’m stressed out over downsizing dishes. I have vintage carnival glass, 1960s Fenton stemware, 1940s diner ware, 1950s lily-of-the-valley patterned grocery store give-aways---the latter two sets were accumulated one piece at a time over years of antique hunting and I still use them daily. It’s killing me that there is no market for this kind of stuff anymore. Can’t sell it, can’t give it away. Young people have no interest in tableware that can’t go in a microwave or dishwasher or isn’t featured on the FoodNet. ©