Books and my Killing Spree 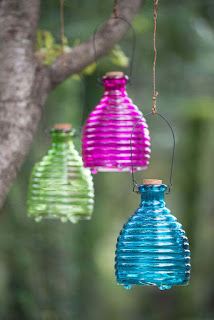 Some people bungee jump or go sky diving or do other dangerous things to get an adrenaline rush. I kill wasps while being allergic to bees. They’ve taken up residence under my siding near my front door and close to the ground where I can’t spray up under the aluminum to get at them properly. I put on a long sleeve jacket with a high collar, a hat, gloves and safety goggles (mainly to keep from accidentally spraying Raid in my eyes) and I keep Benadryl on the countertop just in case I get stung. I’ve only managed to kill seven wasps and I leave their tiny bodies stacked up where they fell out of the nest hoping it will act as an eviction notice to the others flying in and out above their dead comrades.  So far, it’s not working as a psychological deterrent.

Why didn’t I think of this before but---duh!---I just researched the nasty beasts on the internet and I found a couple things to try before I give up and call an exterminator or end up killing myself via wasp venom. I’ve got to buy a 2 liter bottle to make a homemade bait trap and hang it near-by with something sweet inside like honey, wine or pop. Evidentially this time of the year they are always looking for sugar to bring back to the nest. And if that doesn’t work I can get a can of DW-40 that has a little plastic attachment that can shoot the oil up under the shingles where they go in. Supposedly you do it at night when they’re all back in the nest doing whatever they do in the dark and I hope that’s not making whoopee leading to more flying death machines. I’m starting to hate home-ownership and if anyone had told me I’d get to this point I would have poo-pooed them. I’ve been a homeowner since I was twenty-seven. But this year I’ve finally had enough of dealing with maintenance woes, and that’s in no small part due to the pandemic when we went months without being able to hire help.

Okay, I promised myself I would write a post without mentioning the unmentionables hanging over everyone’s heads---the pandemic, politics and---well, the pandemic and politics. Blah, blah, blah and you all know how to translate that so enough said on those topics. But first let me add that unmentionable number one is keeping me at home and without outside stimulation to think or write about it's making Jean a boring writer, and unmentionable number two is making Jean a grumpy writer. So my advice is to turn off your computer and go outside and read. That’s what I’ve been doing non-stop which, of course, I shouldn’t be doing when I have so many other things lined up on my Downsizing and Moving Job List.

My reading is out of control. I figured that out when I realized that I’ve got three books going all at once and am lusting after a new book by one of my favorite authors that's due out tomorrow. With Book One, Steve King’s The Stand, I’m reading a chapter or two every late afternoon while sitting on the deck. It’s the unabridged addition at 1,436 pages. If I ever finish it, it will be the longest book I’ve ever read knocking The Goldfinch (771 pages) from that claim-to-fame in the life of this suburbanite. The Stand is about a pandemic that wipes out 99% of the world’s population. Yup, I know…you don’t have to say it.

Book Two I’ve been reading at bedtime and it's Jill Biden’s Where the Light Enters. I’ve read every book by every First Lady in modern history and while Jill isn’t a First Lady---yet, fingers crossed---she was and still is officially called a Second Lady of the United States. Being a long-standing college professor of English Composition at least we can be pretty sure she didn’t use a ghost writer. The Third Book I’m reading is what I call a popcorn/smut book. It’s official genre is called a Special Forces/Military Romance which means they're fill with action/adventure and violence mixed with raw and very detailed sex and sometimes I skip those pages if they drone on too long and I want to get back to the plot, which leads me to believe that the guys who claim they only read Playboy for the articles could be telling the truth. (I should have used the past tense in that sentence since Playboy quit publishing in March.)

The book I’m acquiring tomorrow is one by Pippa Grant. She specializes in silly romantic comedies and I say ‘acquire’ because while I’ve read twelve of her books, most of which are all structured around a hockey team, a baseball team and a shared hometown, I got them free on Amazon Unlimited. I enjoy Amazon Unlimited so much it makes me feel guilty, worrying about whether or not the authors get any money out of the deal. Back to Pippa: it fascinates me how an author goes about writing so many books with interrelated characters occupying the same turf. Can you picture the charts with crisscrossed strings on the wall in her writing nest? Talk about contact tracing! Character A in book three has a walk-on part in book five and Character B goes to the same fundraiser as Characters D, F and P in book seven. As much as her process fascinates me, Pippa's books have no literary value other than to distract me with quick, easy and forgettable reads. I’d drink to that if I drank and that circles me back to my War on the Wasps. A popular movie quote says, “If you build it they will come,” so wish me luck that wasps like Ernest & Juli Gallo’s Cabernet Sauvgnon because that's the only wine I have in the house and it's what I'll use as bait in my bottle trap. ©