The Highs and Lows of one Crazy Week 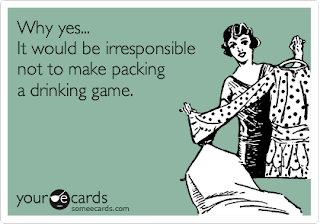 Let's get the low out of the way because it wasn’t so earth shakingly awful that it could harm body or soul. It was just stressful to the control freaking side of my personality. Raise your hand if you knew I was like that. You also know that I’m moving, right? That’s a joke for anyone who’s been reading my blog more than a year. It seems like I’ve been writing about aspects of the process since the turn of the century.

This week I had two women who work for my cleaning service scheduled to pack the kitchen and originally the master closet. When they got here they said they only had an hour and a half before they had to be at their next job. “But we can get it all done in that length of time.” They didn’t. The kitchen is barely a third done, and with the time restrain I scratched them doing the closet and I had one of them take the art off the walls instead, then start shrink wrapping all the stuff with drawers while the other lady worked in the kitchen. After seeing how careless she was at packing my glasses, cups and stemware I was grateful the universe saw fit to do me a favor when they got doubled booked and couldn't stay all afternoon.

If the dish barrel box gets to its destination with no breakage I’ll be surprised. the woman had the box half full when I stopped her from putting heavy stoneware cups on top of fragile antique cups with just a foam pad in between and to make it even worse she had the antique cups resting in the pockets on their sides, not their bottoms or tops. She also only had one strip of tape on the bottom of the box and it didn't even wrap up the sides. Those dish barrel are huge and heavy. I don’t know what she was thinking to only put one piece of tape up the center to join the two flaps. I made her tip the box up while I added more tape. She was snarky when I first asked about it. “I’ve packed many houses up and never had a box come apart.” And I got snarky back at her, “I’m a worry-wart and have lots of tape, so humor me.”

This week I had to make my final payment on the continuum care campus apartment where I’m moving. The first one was in June of 2019 when all there was were huge drawings and blueprints on the walls of a newly built sales office next to the building site. The first time I drove down the wooded driveway and saw the lake off to the side, I knew I wanted to live there. The setting reminded me of our family cottage where I spent all my summers growing up.

Even if Covid hadn’t shut down the building process down for one whole winter it still would have been a long time windup. And yet with all that time to plan I still don’t think I downsized enough. Like I told the son-I-wish-I-had this week, “No one needs four boxes of sea shells.” Oh yes, I got a carried away with pushing the western theme decor out of my life and embracing the beach cottage theme that previously only occupied my guest bath and sun porch. But never fear, before coming home from making my last payment I scouted out the closest Goodwill and found it an easy three minutes away. That's Plan C but it's still a plan for all the stuff I don't have room for once I start unpacking. Plan B is to rotate decor with the season. Some people swap throw pillows at holidays, I could swap out whaling lamps for 1940s sand toys.

Oh, and do your remember that landline phone number I've had for 35 years and am trying to port to my upgraded cell phone? I started the port process August 20th and they still can't work it out between Great Calls/Lively and Spectrum. I just got off the phone with Great Calls and they are giving me a $100 credit on my account to make up for the frustration I'm going through but they still don't have a for sure answer for if I'll be able to keep my old number. My new best friend at Great Calls says their entire port team has never seen anything like my case. Spectrum is now claiming they don't own the number they've been charging me monthly to use for the past 20 years. On another day they said the number was deactivated and out of service for a long time. Yet here we are.

If you’re reading this on the date it’s published (Saturday the 18th) the count down to my move is 17 days. Today when I made my final payment I also made the appointment to pick up my keys, parking pass, WiFi passwords and ID badge after which Tim and I are going to move stuff into my underground storage space and generally show him around for moving logistics. I’ll also be dropping off water, toilet paper, box cutters and other necessities we'll need the following day for the actual move. Sleeping there that first night will be kind of creepy. They'll only be four of us moved in by then. After that four people a day will be moving in all through October.

Four days before my move-in date they’re having a dinner in the new restaurant to welcome all the residents and five days after my move they’re having a Grand Opening party/media event. Look for me on the five o'clock news. Who am I kidding? I'll be so worn out by the Grand Opening I'll probably fall asleep before they serve the champagne. ©