How U-Haul Cheated me out of my Lunch Money 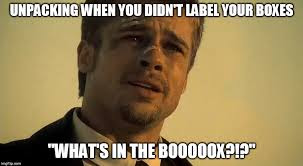 Monday morning I was up before the sun made her royal entrance. That doesn’t happen often and I got to see her fingers of light as she poked them through the pine trees and touched a rabbit sleeping underneath. A series of rabbits has been giving birth in the same spot for over a decade, ever since I started having the landscaper use imported Western Pine needles there instead of regular mulch. They have good taste. That stuff costs double what common mulch costs and apparently it’s easy to burl down into to make a place safe from predators. Except for when Levi was alive. He’d barked his, “I see-eee you!” and they’d pretend to be made out of cement. They aren’t stupid, they knew he couldn’t escape his fence. If Levi had been a human boy he would have been riding the short bus because he never gave up on getting those rabbits to run.

I was up early to run errands and go to U-Haul to get some more packing boxes and what a crap-ass experience that turned out to be but not as crappy as a man who was working there was having. He installs trailer hitches and was dealing with a irate customer who was standing nearby yelling that she was on Yelp writing a bad review. He looks at me and starts in telling me that she showed up for her 9:00 appointment at 9:30 with a different year and model car than the one she told him she was bringing in and of course the hitch they ordered didn’t fit. She's calling him stupid and incompetent for not being able to make the one ordered work and he’s telling me, “It’s up the customer to know what kind of car they have. “You open the driver's door and read the tag! How hard is that?” he asked me but was clearing saying it for her benefit. They are both bickering and waiting for a return phone call to get an okay from the head U-Haul office to overnight him another hitch that will fit the car she brought in. In the meantime all the people who usually work the counter are missing in action and he’s having a second meltdown because he was all alone to man a counter that isn’t his responsibility.

Another customer walks in and takes one look at the situation, turns around and leaves which is what I should have done. But I really wanted those boxes. They were both getting themselves more and more worked up when I finally spoke, “This really is not worth either one of you having a stroke or heart attack over. Can you both just take a deep breath and try to calm down a little?” I’m lucky I don’t live in an open carry state because at that request I’m betting I would have had two hand guns pointed at me instead of each other. Oh, goody, I thought as they both gave me a long, blank stare, at least they’re agreeing on one thing. Without a word, she walks outside and lights a cigarette while he starts silently gathering up the boxes on my list.

Finally, a counter worker shows up, writes up my order and loads the boxes in my car…all in a pissy hurry while she and her co-worker are squabbling over responsibilities, the angry customer is still smoking on the other side of a plate glass window. I'm worried the metal edges on the wardrobe boxes are going to damage my backseat, so I'm getting annoyed that the clerk is taking her stress out on my car. It wasn’t until I was going over the receipt at the Guy Land Cafeteria that I noticed she charged me for three wardrobe boxes when I only got two. Those suckers cost $10.95. I thought about going back for my money. But the boxes totally blocked my back window view and to go back would have required a few lane changes where going home required none. The way my luck with U-Haul was going, I’d probably get in an accident on the way back causing bodies and cars to get wrecked and I didn’t have time for that. Decision time.

I finally decided that $10.95 doesn’t stand between me and starvation but if it ever comes down to that, I’ll be the homeless old woman who is cursing U-Haul as kind strangers drop coins in the cup at my feet. I never forget a debt and T.C. if you’re out there and find my blog, you still owe me $20 from the morning you borrowed it from me after what the kids these days are calling a “hook up.” I could re-frame that whole experience and say I once paid a gigolo $20 for sex. Does that sound any better? No? I didn't think so.

By the time I got to the Guy Land Cafeteria, in case you're wondering, all the old men morning coffee clutches were long gone and the working class men were filling up the place for lunch. But the gods of good-things-after-a-bad-morning gifted me with a whole table full of college guys on their way to school. And they sat at a table four foot across the aisle, perfect for eavesdropping. They talked about the classes they were taking and wondering who'd be living in their dorm and what the food on campus was like. You know, the same sorts of things I'm thinking about as my move gets closer. ©