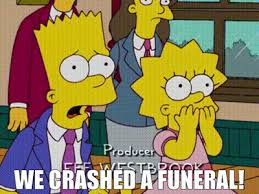 This is last of the scheduled, rerun posts from my caregiver days and if you're reading it you'll know my one-track brain is on another train of thought. I didn't earn the nickname "One Track" for my ability to multi-task. Just sayin' I'm in moving mode big time. By this time next week I'll still be surrounded by moving boxes but those boxes will be sitting in my new place. But Saturday's post is half written, my last one to go out from this house. Blog fodder after that should come easy as I settle into my new life. In the meantime, here's one of my favorite memories from my life living with a husband who for 12 1/2 years could parrot any word anyone said to him but could only initiate a 25 word vocabulary all on his own...

My husband, Don, is an obituary clipper. It’s not a hobby that he picked up since becoming a ‘certain age’ like most people would assume of old people who have a box full of newspaper announcements of this sort. He’s been doing this for at least thirty-five years. Don has a memory like an elephant and he also knew a lot of people, so his collection of clippings was huge at the time of his massive stroke when the collection got thrown out with our move to a wheelchair accessible house. For several years after the stroke he couldn't read but when his reading returned the obituary clipper part of his personality did too.

In Don’s distance past he worked at a funeral home as an after school job while he was in high school. He did various things like take the hearse to the hospital to pick up bodies, put flags on cars on funeral days and wash black vehicles. They liked him so much they wanted to pay his way into undertaking school but he wasn’t buying that as a career choice. The experience did give my husband a special reverence for the importance of funerals and he never looked for excuses not to go to one. In Don’s book, it’s a duty to honor the dead and comfort the living and he’s not about to close that book now that he uses a wheelchair and he can’t talk due to his severe stroke related language disorders, aphasia and apraxia.

In the past, of course, there were many funerals that he went to that I didn’t have to attend because I had no history with the dearly departed. I don’t have that privilege any more and Friday was such an occasion. Don had a clipping and the funeral was to be held at the mortuary where he had once worked. A double header, I presumed on the Planet Aphasia. The name of the dead guy sounded vaguely familiar but no matter how hard I tried, I couldn’t get it out Don how he knew the gentlemen. Oh, but he was animate! This was a funeral where just sending a card would not do. He was going---no ifs, ands or buts about it. Don’s aphasic brain couldn’t say the words: “If you won’t drive me, I’m taking my wheelchair all the way into town” but the determined look on his face sure got that message across. So, off we went in our somber clothing. We’re there doing our funeral thing. Greeting people who spoke to us, signing the guest book and still I couldn’t figure out where this dead guy fit into Don’s life. People would ask us how we knew the guy but, of course, neither Don nor I could tell them. I was doing my standard he-can’t-talk-and-I-don’t-know routine and feeling like I’d like to melt into the floor boards when Don finally got out the word, “Four.” So we started doing the aphasic polka.

“Years!” Don beamed like that’s going to tell me the entire story. He was so proud of himself for getting out that clue to the mystery. Four years. Okay. We started the aphasic polka all over again.

To make a long story short, just as the grieving family was getting seated so the service could begin my aphasia decoder ring finally broke the code. The only person Don knew in the dead dude's family was only four years old the last time he saw him, and that was way back when Don was in high school, working at that funeral home forty-seven years! Don kept the four year old busy at the funeral home when his parents visited their friend, the undertaker. So I’m sitting there in one of those little wooden chairs that are always too close together for comfort, listening to a bad version of “Precious Memories” and trying my best not to laugh up a cow. It was not easy, let me tell you. Even a few people near-by who had over heard our aphasic polka exchange were cracking up.

After the service, we didn’t stay for cake and coffee although I’m sure Don would have liked to have done so---there are no strangers in his world but I was too embarrassed. And thus ended another wonderful experience on the Planet Aphasia where every day brings something new to laugh about. We have now officially crashed the funeral of an almost total stranger. ©