I’d say I’ve got the kitchen as blinged out as I’m going to get it but, knowing me, I’ll find something more to add. I’ve still got a box labeled “small art” to find places for---frames of things under 8”x10” and another box labeled “medium art” of frames under 18” x 24”. I had a lot of stuff hanging on the walls at my old place but I’m hesitating about doing the same thing here and please don’t tell me I’ve gotten bitten by the minimalist bug because I think I’ll die if I have to turn in my Collector of Collections membership card. …still I’m loving the freshly painted, unmarred walls. 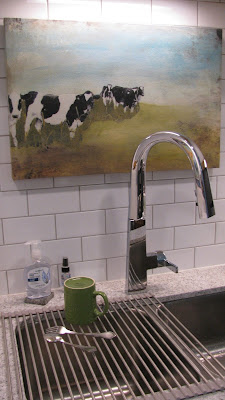 Let’s begin the tour starting with the view I get when I open the door from the hall (the photo up above). The cow painting over the sink is a homage to the diary farm near the cottage where I spent all my summers growing up. The farm is still there and when I was a toddler that’s how I knew we were at the lake, when Dad turned at the cow pasture. Today that farm is 3-4 times the size it was when I was a kid. Back then we cottage kids occasionally followed the farmer around when he did his milking. I have a lot of cow and cowpie stories to tell but that’s for another day. Let’s just say the Holsteins have an entire file all to themselves in my memory bank. 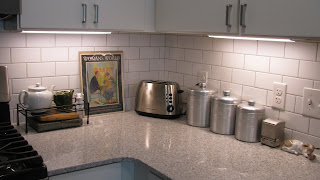 The mid-century canister set was one my mom used during that Great Aluminum Era when housewives all lusted after aluminum tole-ware, glasses, trays, bar-ware and canisters like mine. I have the complete set but I’m from the school of displaying things in odd numbers so the tea canister is cohabiting inside the coffee canister. Heaven only knows what they do at night when the lights are out.

The cow by the toothpick dispenser is a Lladro and if you see one for under $245.00 snap it up. That’s what the authorized Lladro dealers sells these antique porcelain cows for today. They’re from the past century and I’m going to cry if it gets chipped. It’s always been in a protective china cabinet until now. My husband hit a home run with that gift and his track record for doing that wasn’t the greatest. Look at me using sports metaphors. 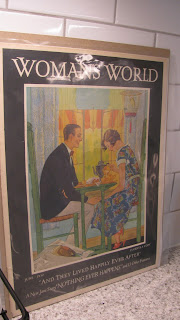 The Woman’s World magazine needs a proper frame but it’s the only woman’s magazine I didn’t sell off before I moved. I had maybe 30-40 women’s magazines from the 1890s through the ‘30s. I choose this 1932 one to keep because it hit all the right notes to go with my new color scheme plus the dinner table theme fit in the kitchen where I needed the touch of color. But mostly I love the teaser line on the cover because it speaks to my romance reader’s soul, “And They Lived Happily Ever After, a new Jane Story, ‘ Nothing Ever Happens’ and 15 other features.” 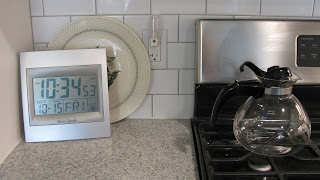 The calendar clock. I have two and they keep my head in the right century, month and date. Behind the clock is a plate my niece gave me and it matches the set my mom had at the cottage for years. It’s too big to fit inside any of my cupboards which is a happy-stance because now I get to see it every day. Lily-of-valley was her favorite flower and a close second of mine. 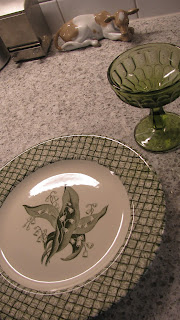 Over the years I collected a similar china pattern from 50’s when they used to give them out as premiums with your grocery purchases. I have a complete set of eight all obtained piece by piece. I mix them up with restaurant ware from the ‘40s and Fenton glass from the ‘60s. I had a huge collection of the latter two and it was hard to downsize then to fit in this place. The restaurant ware represents a lot of flea market and antique store shopping over my entire adulthood years. 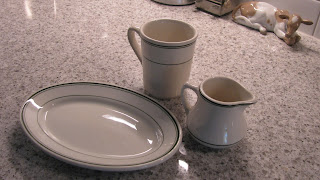 The green Hull’s teapot and the soapstone foot warmer below are vintage and all the rest are newer.  (The black rack was actually a pet store item to raise Levi's dishes off the floor.) I added felt pads on the bottom of the foot warmer and have always used it as a hot pad in my kitchen. In case you’ve never seen one, they are from the era when cars did not have heaters in them and people would heat the soap stone on their cooking stoves, then put them on the floor of their cars to keep their feet from freezing. I used to have two but one got downsized because of the move. The cutting board was one we used in the motor home and I use it a lot and it's the only one I have now. 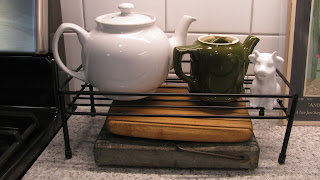 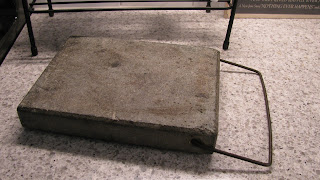 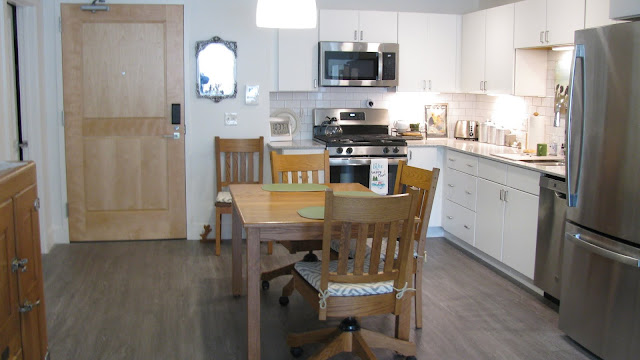 This is the view standing with my back to my living area. The table and chairs were Amish built, the table a custom size so my husband’s wheelchair would fit better than at a standard table. The tiny dog standing by the door is a door stopper. I made it in shop class in high school (1950s), the first girl in my district to take the class. Eventually I hope to always have fresh flowers sitting in the center of the table. And for your amusement, I end this tour with the infamous silver gilded mirror that I dropped face down in the grass when I was painting it, a well document story in a past blog post. 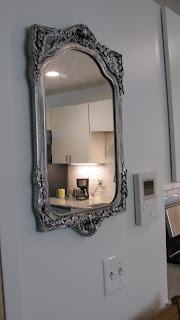 And just so you know I'm not finished finding things to laugh at myself about, I'm having a hard time remembering to use my right hand to turn on the kitchen faucet. I remember when the water hits my wrist. I could maybe reverse the dish drainer to the other side but I don't like the aesthetics of that with the cows and it doesn't function as well for making coffee or using the garbage disposal. ©