Mental Health and Beyond Van Gogh 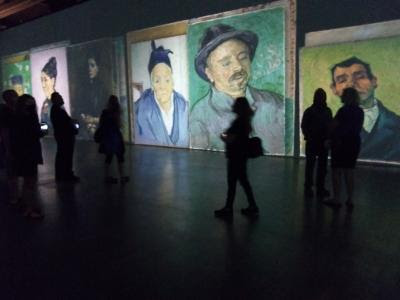 According to the Mental Health America website people over 65 comprise 13% of the population but account for 20% of the deaths by suicide. I was shocked to learn that two million of those of us over 65 have some form of depression and most of it goes untreated. In the future I will no longer make fun of the Medicare Wellness Test questions designed to open up a dialogue about depression and as long as I don't start collecting empty creamer cups from our cafe` and stuffing under my mattress I won't worry about my mental health. (Famous last words.)

Why am I writing about this topic? Because last week I woke up sad and an all day rain kept me that way. Aside from the rain. I do have a clue as to why I was feeling melancholy. In the wee hours of the night when thunder woke me up I had a hard time falling back to sleep. I kept thinking about the stuff that made it through my big downsizing and how I should have let go of more. I'll never use up all the empty canvases or skeins of yarn or quarters of quilting fabrics in my craft closet. I'll never read all the books on my book shelves. Squirreling arts & crafts away for hard times when I might not be able to afford them is something I inherited from my mom and it’s been a life-long habit. Being in the eighth decade of my life puts a different spin on the habit, though, turning that stuff into unrealistic expectations. Is that a thing? Surrounded by so many people in my peer age group---most of whom seem happy and me with my unfulfilled dreams is why I’m taking my mental health temperature. Get out the violin to go along with my whining.

According to a report I read at the CDC---and this is common sense---it’s important for anyone evaluating an elderly person for depression to note that social isolation and loneliness are not significantly linked. A person can be surrounded by people and still feel alone and people can be alone but not feel lonely. However, a recent government study found that: 1) “Social isolation was associated with about a 50% percent increased risk of dementia, and 2) Loneliness was associated with higher rates of depression, anxiety, and suicide.” I won’t bore you with the other bullet points the study concluded. It’s enough to say that loneliness can literally kill us if we don’t get proactive for ourselves or someone we know who fits the profile. Start here with this article from the CDC Depression is not a Normal Part of Growing Older. I didn’t see myself in that article. I’m frustrated but not depressed, but a senior citizen I’ve known my entire life has tried to commit suicide so I know first-hand senior depression is real.

I went to the 'Beyond Van Gogh' exhibit that’s been traveling around the country this week with twenty-two other CCC residents. If you don’t know what that is, here’s a quote from their press release: “Beyond Van Gogh is a new truly immersive experience. While other shows use virtual reality or still images, our show breaks barriers by incorporating both still and moving art. Masterpieces, now freed from frames, come alive, appear, and disappear, flow across multi-surfaces, the minutia of details titillating our heightened senses. The show is projected on every surface around you, this makes you feel as though you have stepped directly into a Van Gogh painting...”

When I tried to find reviews of the art show for this post the first one I found was short and not so sweet. It said, “The show was a very expensive screen saver.” I had to laugh at that because the flowing and changing colors did make me feel like I was standing in the center of a giant lava lamp. I was mesmerized by it. As I watched the moving images and listened to the music a sense of wonder and peace came over me and it reminded my of one of my all-time favorite movie scenes (What Dreams May Come). Robin Williams’ movie character is walking in wet paint, as if he were part of a giant landscape painting. My smart watch registered the lowest stress level reading I’ve ever gotten in the three months I’ve own it…that’s how much the exhibit spoke to my soul.

Before you get to the main room with all the projections going every which way but on the ceiling you go past a series of boards with writing about and by Van Gogh. He was frustrated by his art and yet he created so much of it. It was a light bulb moment to be reminded that even the great artists struggle when it doesn’t work and are euphoria when it does. Van Gogh and Robin Williams had a lot in common in the mental health department and both longed to find something missing in their lives, something not even their great talents could give them. Especially their talents could not give them.

Reality Check: I love where I’m living now. I’ve got plenty of solitude when I want it and interesting people close by when I don’t. I've got Mother Nature's pretty face to admire just a short walk away. And on the bus back from the Van Gogh show I sat next to our CCC’s pastor. We "run" in different circles so I've only had one, one-on-one conversation with her in the past but it feels like we're kindred spirits and isn’t that strange given she’s a true believer and I call myself an agnostic. She suggested that we should get together for coffee and talk. What do you think that means? © 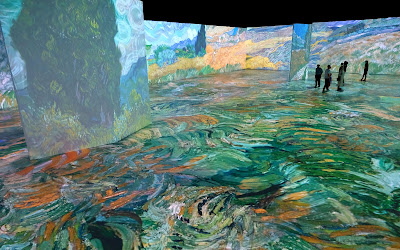 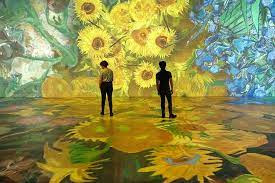 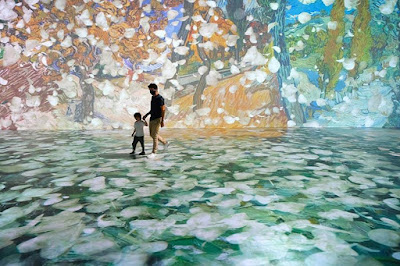