Recyling and Junk Yards Now and Then 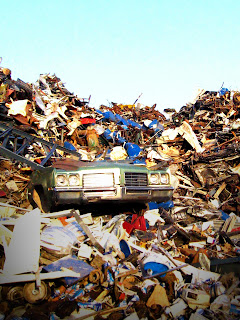 What do you do on an afternoon in September when the clouds in the sky are whiny and can’t make up their minds if they want to move on by to dump their sorrow elsewhere? You hop on a bus down at the senior hall and head to a recycling center that covers 65 acres where we got to watch a machine shred cars. This place isn’t your standard recycling center where the neighborhood moms and dads conjugate on Saturdays to drop off their newspapers, tin cans, glass bottles and plastic trash. This place is like a modernized junk yard of olden days that, when you think about it, have been recycling long before it became cool.

I’ve got a long history of going to junk yards. When I was a kid one of my favorite things to do was to go with my dad when he’d take a load of stuff to the junk yard. Back in those days they let you pick through what other people left behind until they got smart and had one of their workers set aside any useable goods and they started selling them out of a building they put up on the property. That place is still there. In its current form it’s a popular place for people restoring old homes to find architectural savage.

Then along came my husband and his three front-end loaders and street sweeper and I was introduced to specialized heavy equipment recycling centers---bone yards. If a part broke on one of those secondhand ‘beasts’ off we went to spend an afternoon out of town at one of the three bone yards in the state where similar equipment could be found. The rule, back in those days, was customers had to disassemble whatever needed to come apart to get at the part they wanted to buy. Unless an extra set of hands was needed, I’d usually be in our pickup truck near-by with the dog, reading a book. People who own places like that were always down to earth and pretty interesting when you got to know them. One guy in particular stands out in my memory. He once charged my husband $60 for a part, then handed one of the twenties to me and said, “Have this guy take you out to dinner tonight. No reason why you should have to cook after keeping him company all afternoon.” You should have seen the look on Don’s face. “Hey, that’s my twenty!” he said. “Not anymore,” the bone yard owner said. “It’s hers now.” He was a sweet guy with a beach front “cottage” in Hawaii. When he died he had a large, marble bulldozer on his grave and, of course, Don and I had to go see it.

And then there was the junk yard for cars out by Lake Michigan that we always had to stop at on our way to the Big Lake. Not that we needed to buy anything there, but my husband had met the owner at a gas & oil memorabilia swap meet and he had a private museum that you couldn’t get into without an invitation. Don, being a likeable storyteller, finally got the invitation. Come to find out the guy had a one piece glass gas globe that was highly sought after and that knowledge started “the dance.” It took two years but eventually Don talked the guy into to selling him the globe for $6,500. Let me tell, I about had a cow at that price and for something so fragile, having been responsible already for breaking a lesser quality globe. But that hand-painted gas globe was his pride and joy for several decades and when I sold it after he died, I got three times what Don paid for it. The man who bought it, just died and his gas globe collection is up in the air because the out-of-state daughter in charge of the estate is an idiot. I passed along the contact information for the leading appraiser in the field but she'll probably have a junk dealer haul it all away---all 300 globes.

Back on topic: The recycling place we toured today has a set of scales that all the trucks coming into the place have to drive over and it can weigh up to 200,000 pounds per vehicle and trucks never stopped coming and going the whole 2 ½ hours we were there. The place employs over 650 people and 75% of their business is shredding cars. They had mountains of mixed metal including vehicles and every conceivable thing you can name waiting to go through their giant shredder. All that stuff comes out the other side sorted and melted and ready to be sold to industries that use the aluminum, copper, brass, bronze and steel to build new stuff. We got to walk up the 75 steps to the glass tower where a person controlling the shredder works. He monitors 5-6 screens and a computer keyboard making sure everything is working as it should be. While we watched the machine in action we got to see a couple air bags go off as cars got crushed, sending up a cloud white gas. Once in a rare while, he said, if they haven’t gotten all the liquids drained out of a car properly, a fire will start but the machine puts it out quickly. “It’s pretty cool to watch,” he said. “I’m surrounded by flames.” The tour cost a whole six bucks for our transportation. Quite a bargain, don’t you think and the tour also brought back some priceless junk yard memories. ©

NOTE: The photo at the top is what the junk looks like before going through the shredder and next two photos is what the sorted and smelted metal looks like when it comes out the other side of the shredder. And the third photo shows a pile of wiring that somehow in the process of shredding mixed junk gets separated out from rest. Oh, and this place has other areas where they process paper, plastic and electronic equipment into a form that can be used in manufacturing more stuff. This place is where all the community recycling centers and pickup services bring their stuff after they've sorted and bundled it on their sites. 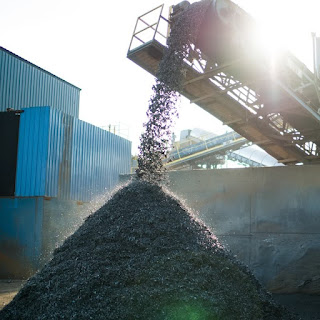 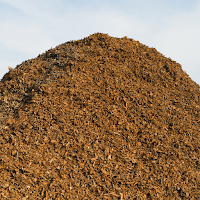