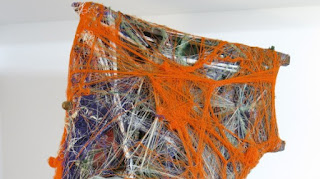 What happens when you put an archives librarian together with a retired professor to give a lecture on the Myth of Biddle City? You get a well-research topic told in such a way that it was hard to follow and somewhat boring for anyone except those with a connection to our state’s capital city---Lansing, Michigan. At least that was the consensus of myself and two of my seatmates at the Life Learning Lecture series down at the senior hall. I’ve been going to these lectures for six years and this is only the second one that didn’t live up to the hype. But the cookies were good, the crowd was friendly and the price of admission was free so I’m not mourning the afternoon not spent at home playing with my toes. I hate to say this, being in the same age bracket as the professor but even with a microphone her voice had that old person, wavy and shaky quality that made her hard to understand. My voice is starting to do that, too. I think I’m saying stuff clearly but syllables here and there don’t come out. Vocal chords dry up and get too stringy for normal vibrations. Yadda, yadda, yadda. Growing older sucks. If aliens from outer space came down, snatched a septuagenarian off the streets to use to decode our language they would have a big surprise when the next person they snatched is young and has a well-modulated and strong voice. But I disagree.

As a Michigander, I did find it interesting that when our state capital ended up in Lansing in 1847 the place only had nineteen houses and no roads. (The provisional capital was in Detroit but it was deemed to be too close to foreign soil to stay there.) A year later with the help of investment capitalists an entire town sprung up and they were paying a $6 bounty for killing wolves within the city limits. And when they had conventions in the early 1850s, the records show they averaged 5-6 ‘soiled doves’ locked up in their jail each year. The men who bought their favorites, of course, were not mentioned and presumably roamed as free as the four-legged wolves.

The next day was my monthly book club. I was a bad, disinterested participant because half way through the book I quit reading. The Other Wes Moore by Wes Moore is a true story of two black boys who grew up in the same, drug infested neighborhood but one ended up serving a life sentence and the other became a Rhodes Scholar, decorated veteran and worked at the White House. When the latter Wes heard about his “name twin” he got curious and started visiting him in prison. They became friends and the bottom line message of the story is that by the grace of God their life paths could have easily gone the way the other person’s did. My reasons for not finishing the book were twofold: 1) The download of Bob Woodward’s book, Fear, came on my Kindle, distracting me, and 2) The book club selection was confusing as the story transitioned back and forth between being told in the first and third person. I blame the publisher for that more than the author. Those transitions needed clear cut visual queues in the way it was printed. No one in club gave the book a high rating.

It’s been a busy week. Our Sculpture Park also had a lecture, this one titled: Contemporary Disability Sculpture. I had no idea what to expect even after reading the description of the show: “This exhibition emphasizes the relationship between disability and the fundamental human experiences of change and embodiment.” Who writes that double talk? Over 600 people usually attend these quarterly lectures and they draw people in from all over the country to hear a panel of critically acclaimed artists talk about their work. They also serve fancy schmancy desserts and you get to hob-knob with a bunch of creative types and eavesdrop while mingling with the crowd after the lecture when the exhibit is unveiled. Walking around trying to figure out why corporate leaders are willing to pay thousands of dollars to own some of that stuff, is fun. What makes a giant blob of orange string more arty-farty than, say, the world's largest ball of twine in Kansas? The curators of our Sculpture Park are too contemporary for my tastes. If I had my way the place would be filled with Michelangelo’s naked men and armless Venus de Milo-like marble statues.

Have I ever mentioned that I spent a semester in college carving marble? Back in those days our marble slabs came from monument companies who’d occasionally misspell a decease’s name on a tombstone. I managed to get all the writing off the stone and I got a set of B cup breasts rough-cut into the headless piece before the semester ended but it was far from finished. For some reason the professor took pity on me and gave me an ‘A’ anyway. To this day, I see a granite countertop and I think, “What a waste!” I'm just sayin' beware if you ever invite me over to see your new countertops because I still have my stone chisels and mallet. ©

Photo from the sculpture exhibit.

Posted by Misadventures of Widowhood at 8:14 AM