The Think Piece --- from Pancakes to the Dalai Lama 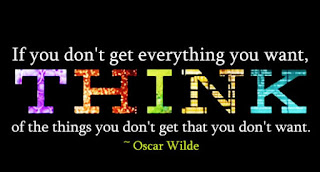 Every so often I try to write what I call a ‘think piece’ which, to me, means I have to dig deep and write something that makes me and others think rather than just record diary-style what’s going on in my world. Looking for inspiration is the tough part and I tried to find it at the Guy-Land Cafeteria. It’s a great place for people watching and it’s big enough that the seating is never full therefore you can stay as long as you like nursing your coffee or going back through the line for dessert without feeling pressured to give up your seat to someone waiting. No one ever has to wait at the cafeteria, at least at the time of the day I haunt the place. And best of all, I’m not the only one who is there pretending to be John Steinbeck or J.K. Rowling.

The cafeteria has a breakfast special that’s a great buy: two eggs, two pancakes and two pieces of bacon for $4.80. They also have a mini breakfast of one each of the before mentioned items but I’ve never ordered the mini in the thirty-odd years I’ve been going to this local chain. I clearly said ‘special’ as I touched the poster advertising this golden oldie but when they called my ticket number and I got my order back to the table, I noticed it was a mini breakfast. I grabbed the plate and was heading back up to the pickup station, thinking I’d picked up the wrong plate, when I noticed my ticket actually said mini breakfast. The manager who took my order must have been on auto-pilot when he saw an elderly lady standing in front of him. Most senior citizens of the female persuasion probably order the mini plus the manager was frazzled trying to supervise a new line cook and taking orders at the same time. I weighed my options of just eating what was on my plate or waiting for a corrected order and I decided that I didn’t get what I wanted but I got exactly what I needed. I even heard my hips thank him for his screw-up.

“I didn’t get what I wanted but I got exactly what I needed.” I googled that sentence and it turned up 817,000,000 hits. Yup, I am not the only person on the planet who thought that idea was somehow more profound that the sixty-one characters it took to write it. At the top of the list was an essay about praying for one thing but God giving you something else. There’s a whole lot of that going on in google-sphere. People expounding on the inspirational value of what someone got that was better than what they asked God for is a popular theme. There’s even a Garth Brooks song titled Unanswered Prayers about a guy and his wife who ran into his old flame at a hometown football game. “She was the one that I'd wanted for all times,” Garth sings, “And each night I'd spend prayin' that God would make her mine, and if he'd only grant me this wish I wished back then, I'd never ask for anything again.” And then he sings the punch line in the chorus: “Sometimes I thank God for unanswered prayers.”

Obviously, all those the-universe-had-better-plans-for-you type articles were not talking about getting one pancake or egg instead of two. But still, when you go to a place looking for writing inspiration you’ve got to asked yourself if a restaurant manager I’ve known since the last century making that mistake was serendipitous or was it just the fact that I was actually noticing every single thing in my surroundings, looking for signs and points of interest to hang a ‘think piece’ on. If I hadn’t been there intent on finding a writing prompt maybe I would have just been annoyed at what happened and forgot about it before noon. Or worse yet, I would have brought the mistaken breakfast to the attention of the manager so he could feel bad and then I could feel bad for making him feel bad. I used to have a friend who made big scenes over things like that, even if it happened to someone else’s order at the table. We quit going out to eat with her and her husband because it seemed as though she was looking for reasons to berate and embarrass service people. Why do some people go through life twisting the simplest mistake or ill phrased sentence into a personal affront worthy of a hissy fit?

Have I ever mentioned that I love the Dalai Lama? He says wonderful things that make perfect sound bites and memes, like: “If you think you are too small to make a difference, try sleeping with a mosquito” and “Remember that sometimes not getting what you want is a wonderful stroke of luck.” But one of my favorite Dalai Lama quotes is: “Time passes unhindered. When we make mistakes, we cannot turn the clock back and try again. All we can do is use the present well.” Okay, I did it again. I set out to write a ‘think piece’ but I ended up letting the wise words of someone else be the catalyst to make myself and others think. © 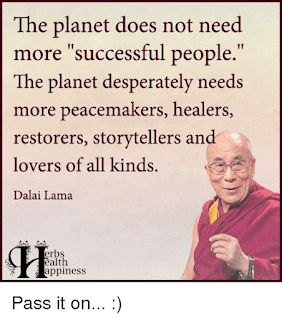