An Afternoon with my Two Favorite People 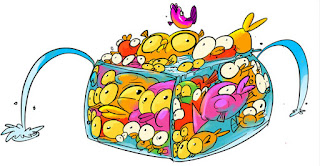 Friday night I packed the back of my Chevy Trax up with an oddball collection of stuff, all with one thing connecting them to another---my parents.  There was a coat and hat rack from the turn-of-century, a small side table/book case my dad made, a box of silverware, a box of containing embroidery pieces my mom did, a few of her hand crocheted dollies, a baby quilt she made for either my brother or me, a quilt she made for my dolls, a set of embroidery quilt blocks that never got put together and my brother’s and my baby blankets. I was actually worried I’d get into a rear in collision on the way to the lake and these things I’ve been holding onto would get destroyed before I had a chance to put them up for grabs.

The next day I almost fulfilled that car accident vision in my head and it would have been a doozy. I was in the right hand lane of the expressway going through the busy city and after passing a large convoy of slow moving military equipment in the center lane, I put my turn signal on to pull in front of the head truck in the convoy and at the exact, same time a car in the far left lane was doing same. We came towards each other like two fat and happy sports fans coming together for a belly bump. And like a synchronized ballet we both saw each other at the same time and jerked ourselves back to where we came from, the belly bump not completed. Thank goodness! I would bet money that the young guy driving that head military truck was peeing his pants. I know I would have been if I hadn’t just emptied my bladder at home five minutes before the almost pileup of heavy equipment that surely would have closed the highway down for hours. At least my obituary would have noted the fact that I always follow the rules of life. “She died in a fiery crash, her turn signal still flashing when the fire department arrived.”

I met my two nieces at a popular bakery/restaurant for lunch before going over to the family cottage to have what one of my nieces dubbed an episode of the Antiques Road Show. After the waitress took our orders my oldest niece told the waitress to bring her the check and I protested telling her to give it to me. The waitress said, “The first one to speak up wins.” My younger niece laughed and said, she told her husband that’s exactly what would happen. Niece #1 always has an excuse for taking the check, this time it was because niece #2 had a birthday in August and I was bringing family treasures out for them to pick through. One time niece #1's excuse for taking the check was, “I just got a new credit card and I want to see if it works.” When hearing that, her nephew naively asking, “Why wouldn’t it? You have to apply to get them” which had everyone howling with laughter.

Niece #1 is enamored with all things mid-century and she was thrilled to get my mom’s silverware. Before I gave the set to her I researched to find the pattern name on Replacements Ltd. and I had to go through 28 pages of flatware before it popped up. When I saw that ‘1950’ release date, I was so excited that she’s lucky I didn’t call her because it was after midnight. Replacements Ltd. is a great resource for finding missing pieces of vintage and antique crystal, china and flatware sets. I love Google. I was also able to find the building plans for the revolving book case/end table that my dad built for my mom’s 1958 Christmas present. I have my ways of paying my niece back for lunches. I snapped those plans up on e-Bay. She was a teacher and will enjoy that show-and-tell prop.

But the most fun part of the day was when niece #2 told a long-drawn out story about a trip she made to Pet Smart to buy a goldfish and they wouldn’t sell it to her after asking what size tank she had (15 gallons) and how many fish she already had (three). She was told her a fish would die with four in a tank that size and then she’d come back wanting a replacement. “What if I sign a pledge not to bring back a dead fish for replacement, would you sell it to me then?” “Nope.” “You’re serious!” “Very.” “Can I see your manager?” After telling the manager she’s got four grandchildren and she wanted a forth fish so they’d each have one to name the manager told her if she didn’t quit trying to buy a fish they’d have to ask her to leave the store. She ended the story by saying she went to another store that confirmed the fact that four fish in a fifteen gallon tank is too many. PETA guidelines. “So you won’t sell me one either?” “I’ll sell you anything you want,” the clerk said. Niece #1 and I had tears running down our cheeks we were laughing so hard. Niece #2 has always had a great sense of humor and a personality that makes her fun to be around but until that afternoon I didn’t realize that she could easily do standup comedy. ©
Posted by Misadventures of Widowhood at 12:30 AM