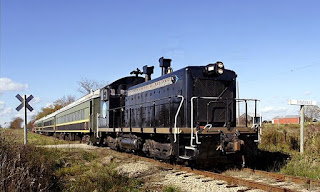 A town on my side of the state has a restored train that’s almost a 100 years old that they run back and forth to another town a short fourteen miles away. This time of the year it runs for fall color and pumpkin peeping tours but they also do murder mystery excursions, bunny runs in the spring, Santa runs in December and the ever popular Great Train Robberies plus the three car train can be booked for private parties. You can also book special rides on just the engine or the engine pulling the caboose. I’ve wanted to go on this train for a couple of years now and last summer my Red Hat Society chapter took the trip but on a day when I had a long-standing doctor appointment that I couldn’t change without waiting another four months. I was a tad miffed since it was my suggestion that started the ball rolling. But they voted on the date, majority rules and that was that. Democracy, you’ve gotta love it even when it sucks.

I got another chance to take the train this week when three of my Gathering Girl pals and I managed to get tickets on an excursion sponsored by our senior hall. I hadn’t been on a train since the mid ‘60s when I went to Chicago on a Christmas shopping trip with a group of 10-12 other twenty-somethings in a service sorority I belonged to back in those days. What I remember the most about that group are the candlelight induction ceremonies, the Jackie ‘O’ classic sweaters most of us wore and all the tea and cookies we served for God knows who around the community. Hoity-toity groups like the Daughters of the American Revolutionary War. Who knows why we were there, maybe they were too old to bake their own, darn cookies. It’s a mystery that’s lost in my old brain. I was only in the group a couple of years. Apparently that’s all the candlelight-minus-a-male-across-a-table I could stand.

Back on topic: The day of the great train ride finally came, a crisp day that had us all wearing winter coats but that didn’t dull my anticipation of having a good time except for the possibility of having to pee while on the train. The only thing I remember about my earlier train ride to Chicago is how hard it was to accomplish that task on a train that swayed from side to side when I was still young enough to hover over public toilet seats instead of actually sitting on them. Growing up my mom drilled it into me that I’d die of a dreadful disease if I didn’t hover, which I did most of my life until my knees got so bad I couldn’t do it anymore. Was that too much information? Thankfully, I didn’t have to pee on this train ride, but I did check out the bathroom and it didn’t look like an outhouse inside like the one I remembered from my ‘60s train ride. Historical accuracy is great in restoration projects but I draw a line at wooden stabs with holes cut in the top and calling it good enough.

Our senior hall bus delivered us to a railroad museum first where we had lunch before getting on the train and getting our tickets punched by a conductor dressed for the 1900s. $39 covered the bus transportation, lunch and the train ride. Not a bad deal for a fun afternoon if the food had been eatable. Those who ordered the beef said it was too tough to eat, while those of us who had the chicken were happily satisfied. My travel mates offered their beef for Levi’s dinner and since I had a pocket full of plastic bags (to pick up poop on his walks) I took it. He loved it but the tough beef and empty stomachs gave we Gathering Girls an excuse to have donuts and coffee after the train ride was over during the time allotted for us to shop the small town while waiting for the bus to take us back home. Our senior hall director thinks no day trip is complete if it doesn't include shopping time.

The train coach seats were designed in such a way that two people faced two others, so close together that our knees were miserably close and overlapping. Before the train was rolling we moved to the dining car. It was great, lots of room to spread out since only eight of the 50 of us on the train made the switch. The conductor was dressed in period garb and as he punched our tickets he got teased about not spelling out words like the conductor on the Polar Express. Having never seen the movie someone had to explain the joke to me. A singer with a guitar sang railroad themed songs for half of our ride and we really got silly taking part in the sing-alongs but otherwise as the train car swayed back and forth it could have easily wooed us to sleep. Someone had an app to measure how fast we were going and we never made it over 12 miles an hour. Why does anyone need an app for that? Are you going to measure how fast you walk? How fast your Uber driver is going? Or maybe a roller-coaster? Inquiring minds want to know. But until a plausible answer comes along I let me say I'm glad I got to check this great little train ride off my Bucket List. © 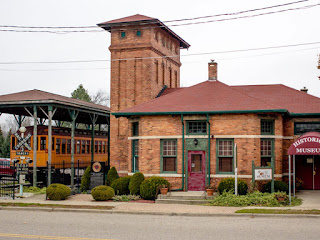 Posted by Misadventures of Widowhood at 12:01 AM