A Holiday with the In-Laws 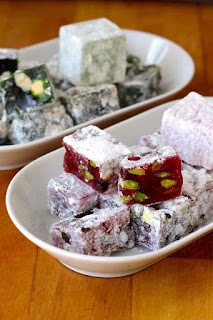 Due to my own loose lips on Facebook, one of my great-nieces on my husband’s side of the family got wind of the fact that I was going to be alone on Thanksgiving. She told her mother and her mother called me and said: “I’m not taking ‘no’ for answer. You’re to be on my doorstep at twelve noon tomorrow.” I did try to say no, that I’d be fine alone but she repeated “Twelve sharp! You don’t have to bring anything” and I said, “Good, I don’t have anything in the house to make and the stores will be too busy tonight.” But her daughter had a request of all the guests. We were to bring one of our favorite things---something small we are grateful for. She was bringing, for example, Oreo cookies to hand out during the ‘favorite things’ game.

Serendipity kicked in after I got off the phone when I remembered that Amazon had just delivered a box of Turkish Delight Pomegranate Pistachio jells. (A Christmas present for myself.) Oh-my-god are they good and with a 65% sugar content these small cubes of candy melt in your mouth. Supposedly they were developed in its current form in the 10th century by Arabic apothecaries and they are the great-granddaddy to our modern day jelly beans when a smart confectioner in Boston in the 1860s put a hard sugar shell on them instead of the classic powdered sugar. Turkish Delights are also known as “Lokum” named after the Sultan who helped to popularized them around the world. Who knew jelly beans came with such an interesting back story. Anyway, I got out some paper cups made to hold mini tarts and I filled fifteen of them up with Turkish Delights to pass around.

This exercise in sharing something we love was more fun than I expected it to be. Everyone told a story about why they brought what they brought. My niece-in-law handed out circus peanuts, one of her daughter’s brought chap sticks for everyone. Twinkies, Ding Dongs, beef jerky sticks, Reese's Peanut Butter cups, incense, Pepsi, new car scent tags for our cars----lots of laughter came with the stories. I told the history of the Turkish Delights and how one of my guilty pleasures is to occasionally try something new that’s made in another country. Several of the stories were so sentimental they came with tears as people told about the long-gone person who introduced them to their comfort food. And it was great hearing people talk about their Uncle Don (my husband). Everyone knew he would have brought coffee and our sister-in-law---the mother or grandmother of everyone in attendance---would have brought slices of Polish kielbasa. It’s kind of cool, really, how certain foods can bring back memories of certain people. My dad was the Fig Newton cookies guy and I can’t see Brach's Orange Slices candy without remembering my mom.

Thanksgiving was a day of good food and fellowship and I came home with enough food for two more meals (plus a bag full of favorite things). No family in my life-long experience has ever had so many good cooks as in my husband’s. And no one had their noses buried in a cell phone. Being the oldest person in the room it was quite obvious---at least to me---that I crossed over ‘The Line’ a few times when I blurted out things I probably shouldn’t have, the way old people and young children do. For example, after my niece-in-law’s husband said, “I’m always careful” I blurted out “And yet you ended up with all these kids.” He was talking about carpentry but everyone laughed at my joke. It was one of those rare afternoons when I didn’t try to edit any of the words that passed over my lips. Unconsciously I knew that no matter what transgression I could make, I’d be forgiven. “That’s just Aunt Jean” and we love her flaws and all.

Why would they cut me slack when others might not get it? Because I came into the family 48 years ago as the barefoot, hippie girlfriend of the family’s baby brother. Don’s oldest brother---the deceased father or grandfather of everyone there on Thanksgiving---got a kick out of how much I shocked the uptight, next-in-line brother and how much I confused the ever elegant Cary Grant-like third-in-line brother. I was just as likely to sit down on the floor and play with the kids as I was to hang out with the adults. I didn’t drink or smoke but I could ride the pink elephant in the near-by park and I loved board games. They didn’t understand me but in their eyes I was a good influence on their baby brother. I only met Don’s father once because he died soon after but he sealed the deal for me when he told the family, “This is 'The One' Don needs to settle done with.” I remember that day as if it was yesterday. I was wearing a t-shirt with two giant foot prints on my chest and all the other ladies were dressed in their Sunday best---I didn’t know I was going to meet the family that day---and I sat on a footstool next to Don’s dad. He teased me unmercifully and I gave it right back at him. The rest is history. ©
Posted by Misadventures of Widowhood at 12:30 AM