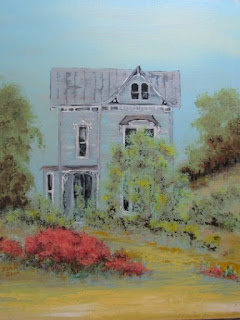 Those who know art will recognize the painting above as done formula-style aka amateurish in the tradition of Bob Ross. I found it down in my basement last week. It was tucked away in one of my printmaking folders and I hadn't seen it for nearly twenty years. I'm keeping it for my new place while better quality, arty-farty paintings I’ve done got sent off with the trash. The colors will go with my future decor and it reminds me of a house my husband and I almost bought and wanted to restore to its former glory. It had a round barn in the backyard---one of the few left in the state---and house was out in the middle of nowhere. It never had indoor plumbing other than a make-shift shower in the basement and a cold water tap in the kitchen. Late 1800s bathroom fixtures sat in their original shipping containers in the basement, never installed. But the person who inherited the house from a great-uncle (who built the house for his run-away bride) got nervous he wasn't asking enough, so the nephew got a realtor involved and he backed out of our deal. A year later he sold the place for $10,000 less than we offered plus he had to pay realtor fees proving that a bird in the hand really is worth two in the bush.

I think about that house from time to time and how different our lives would have been if we'd gotten our dream home. It would have changed the trajectory of our lives. The uncle lived in the kitchen and butler's pantry his entire long, lonely life and the place was so thick with dust you couldn't tell the windows were beveled glass or what kind of wood was on the floors. No furniture had ever been moved into the rest of the house. The exterior was brick with a tin roof and it was structurally as sound as the year it was built. We loved the promise of greatness that house whispered to us. We adored that barn, even the brick outhouse would have been turned into something quaint. We got to see the inside of the house again, at an open house when the restored Victorian was up for sale. It was magnificent! They had installed the copper bathtub and the toilet with its ceiling-high oak water box that were in basement crates and they added a skylight above them. My heart be still, that bathroom still makes we wish I could take a bath under the stars. Touring that house had me wondering if the reluctant bride was sitting on a cloud and saying, "Would you look at that, God, the house finally got finish!"

And then there's another painting of another empty house that needed a lot of tender love and care, this one painted my mom (below). She took up oil painting at the age I am now and she was a true disciple of learning-to-paint via a TV show on PBS. Being a somewhat snub about art back in those days, I wasn't especially fond of her work and if honesty were required here I'd admit to being a tad bit jealous because I'd taken a million and one art classes during my life and she'd had none yet people were handing her compliments right and left. I resisted the temptation to critique her work when I'd see one of her canvases though I wanted to. She had that Grandma Moses-like lack of prospective that drove me crazy.

Background on Mom's painting: First off I hate orange but it was a gift from Mom because she wanted each of her kids to have something she created. It hung in my closet forever---is still there today. It goes with me when I move, and will probably decorate the inside of my 4' x 8' storage unit at the end of my parking space. The old house theme was a family joke of sorts because for several years Don and I was in serious house shopping mode, had notebooks full of newspaper listings. Every Sunday morning when the realtor section came out we poured over it looked for what was new on the market. The family joke was we didn’t like any house if it had electricity, central heat and plumbing and if birds were flying in and out of broken windows, all the better. That wasn’t far from the truth. We had more dreams than common sense and we figured whatever an old house needed we could learn how to do.

We did buy a few old houses…in the form of prints we found at art shows but we never did find our dream house to restore. 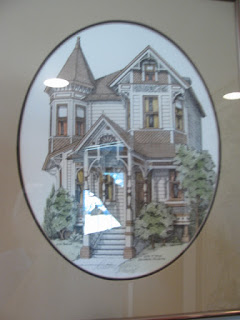 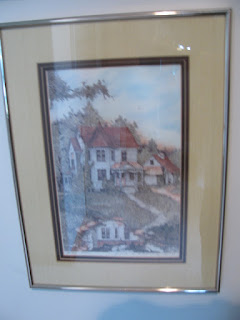 And the photo below is one my husband took of an old house that was surrounded by hoarfrost the morning we saw it. It took third place in a photo contest with over 700 entries. I won’t be able to hang any of these in my new place---wall space is limited---but they might find their way onto the walls of my storage unit. I don't plan to keep much in there. No someday maybe projects but a miniature art gallery would be fun. I literally have 49 paintings, prints and silhouettes hanging in my house now that will have to be pared down to seven or eight. Trust me, I'm not looking forward to that downsizing project! © 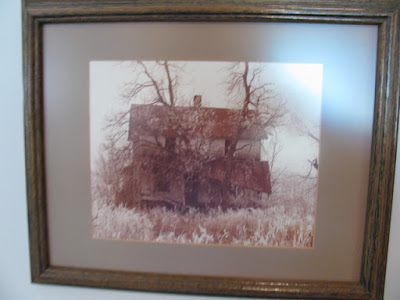