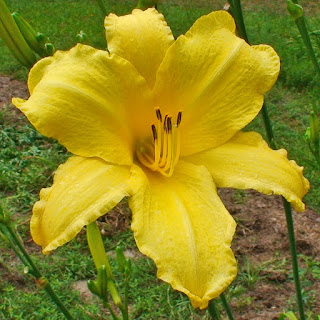 A few years back I planted what at the time was supposed to be the tallest, yellow daylilies on the market. This is what a guy at Daylilies of North Carolina says about the variety: “Here we have a true giant in the daylily world. A flower that begs you to stand next to and have your picture taken with it. And you do not have to squat, or stand in a hole, or use a funny camera angle to show the height of this daylily. Modesty dictates that I register this beauty at 68" but I have measured scapes at 74". What's half a foot when we are talking about ‘reaching new heights?’ I would rather tell you that it has wonderful fragrance, and 7 ½" blooms, and fabulous mounds of foliage.... and it sets pods!”

On my kitchen counter is a bouquet of 25-30 stems of my daylilies. Normally, I wouldn’t cut them and bring them in the house, but I have a guy here prepping my deck for staining it and putting new lattice around the bottom and the lilies will get trampled. I had no choice, but to bring them in if I wanted to stretch their beauty out a few more days. In the meantime they’re filling up the house with sickeningly sweet fragrance. If someone I know were here he'd say, “Something smells like a well perfumed whore on a Saturday night” and I suspect before all the blooms are gone the bouquet will end up in the garage if it keeps reminding me of ladies of the night.

I don’t know about this guy doing my deck work. He didn’t come about because I thoroughly vetted him or he came highly recommended or has done deck work for me in the past. I happened to ask my lawn care guy if he knew anyone who stains decks and replaces lattice skirting and he said, “I do. I do it all.” So I told him to write up an estimate and the next thing I know I came home to find a power washer sitting in my back yard. Since he was the first person I asked about the deck, I knew it was his. I called him up and left a message that he needed to get something down in a contract because we hadn’t agreed on a price or the product or method of applying it. Yadda, yadda, yadda.

He called me back and long story short, he’d already bought the stain and the plastic lattice and he claimed I told him I wanted the lattice painted gray to match the decking and he was just getting ready to start doing it in his garage. I was shocked. “Painting it gray wouldn’t have occurred to me in a 100 years!” I said. “It’s always been white. It comes white. White lattice matches the trim on the house.” And I was racking my brain to try to remember what I could have possibility said to make him think he had the job in the bag before he’d even given me an estimate of the cost involved. The word 'dementia' occurred to me during this exchange and I wasn't sure if that label should be smacked on his forehead or mine. Either way I clearly lost control of the deck job I'd planned on getting a couple of estimates on. And that makes me feel old and unsure of what's really going on.

I bluntly told him, “I did not agree to this job and won’t until you put it in writing so we both know we’re on the same page.” The contract he gave me had exactly twenty words in it. I’d proof read enough of my husband’s contracts and I’ve seen enough Judge Judy shows to know what should be in a contract and this guy didn't even include the name of the person---his live-in girlfriend---who he always has me write the checks to when lawn care payments are due. Without a canceled check made out to him, I’d have no way to prove I paid for the extensive deck work should things go bad and we ended up in court. I've never sued anyone in my life but there's a first time for everything.

One of his helpers told me he does the check thing because he owes his x-wife a bunch of back child support and she comes after any money that goes in his bank account. He’s a likeable guy but as the summer has gone by he’s gotten increasing too eager to spend my money. He wanted to power wash my house one time. “No, thanks.” "Are you, sure? It needs it." No it doesn't. “Your shrubs need trimming. I’ve got my trimmer in the truck.” “Wrong season to do it in.” But I wanted to say, “I’m the home owner, I DECIDE when I schedule what.” Ohmygod, I miss my nephew! He took such good care of my yard and even though he charged more than Avoiding-Child-Support Guy, my nephew was worth every penny…and he paid taxes on his income like all good little foot soldiers in this world do and he knew how to write a contract. But I can’t fire this guy because there's a shortage of lawn care services in town and I was lucky to get him last spring after calling nearly a dozen who weren't taking on anymore customers.

I’m not looking forward to next week when the deck gets its makeover. He’s bringing his live-in girlfriend with him to help stain the 191 spindles and her son to do the lattice work. I’ve got a huge deck that wraps two sides of the house and deck staining alone---without the lattice work---has always been a huge, three day production and I’m crossing my fingers Avoiding-Child-Support-Guy knows what he’s doing. I will be watching like a hawk. I've told him before signing the stupid contract that "neatness counts" and he just laughed which made me feel like a controlling old lady. I did get him to cross off his name and write his girlfriend's name where it said, "payable to...." She's got to be ten ways to dimwitted to allow herself to be used that way.

On the good side, this week I did learn something about daylilies, having them in the house. The flowers really do only last a day---sun up to sun down even under artificial lights---and when they die they are so wet they 'cry tears' like babies needing their mamas. They don't drink a lot of water like gladiolas and other large flowers do. Where does all the water they drip come from?  ©