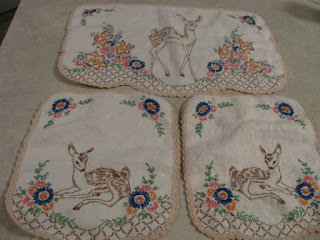 My mom, like other moms in the 1940s and ‘50s, was prolific at crocheting and embroidery and while emptying out the basement I ran into a dozen or so pieces she made. They sat in my garage for a week, making me feel impotent because I couldn’t decide what to do with them. The local auction house would have ended up selling the entire lot for a dollar and after the fees were paid I’d get a whole eighty-two cents and e-Bay doesn’t have a strong market for that sort of thing either. Throughout the week the Salvation Army with it cardboard box labeled as such sat on the garage floor mocking me for my inability to let go. I had already given my nieces some of her handiwork last summer, thinking that was all I had until these pieces showed up so passing them on to them wasn’t a strong possibility either.

Sometimes what goes on in the back of my mind surprises me. With seemingly no forethought I woke up one morning, marched directly to the garage still in my nightgown and I took some pictures of the embroidery, posted them on Facebook and tagged some of mom’s nieces to offer the handcrafts up as gifts. By nightfall they were all spoken for including things I hadn't even photographed and I mailed everything to various relatives the next day and, boy, did that feel good. One of my cousin’s collects crocheted doilies which I didn’t know and she ended up with an entire bridal party of dolls in dresses that mom made back in 1950. Another shirt-tail relative from out of state who I’ve never met offered to take some of Mom’s handiwork for the museum she runs and I gladly complied with her request for a photo of Mom and a small write-up about her to display with them. One cousin who had an terribly abusive childhood came to the give-away post late and she ended up with a couple of things I had planned to keep for myself. She and my mom had a special relationship and I figured she needed the physical connection to my mom more than I do. 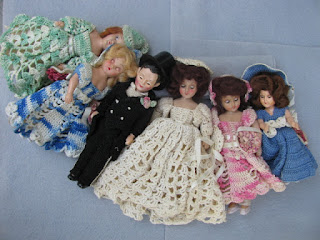 It was an emotional week in the Department of Downsizing. Another task I had in the garage was sorting through decade’s worth of art supplies plus drawings from classes I took back in the 1980s. I don’t know why I thought it was important back then to save every edition of prints I’d pulled off metal plates, wood blocks and lithograph stones in a printmaking class or all the drawings of every naked person who stood before me in figure drawing classes. Judging by the style of some of my prints I was trying to be the next William Blake. My mom had died the year before---under traumatic circumstances---and apparently I was trying to make peace with her death by writing cryptic poetry and committing then to etching plates. I hate the color orange with a passion, always have, so for me spend time making an etching plate and pulling twenty orange editions off it---the class requirement---boggles my 2019 sensibilities. I was in a very dark place. 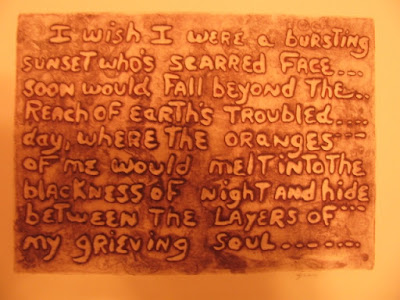 For those who might not know of William Blake (1757-1827) according to Wikipedia he was “an English poet, painter, and printmaker. Largely unrecognised during his lifetime, Blake is now considered a seminal figure in the history of the poetry and visual arts of the Romantic Age.” Obviously, he was a prolific saver of his work because you can’t study printmaking or poetry without falling all over him. At least you couldn’t during my age of being a sponge in the world of art history. I admired him. I wanted to be him…or Michelangelo. Among the other art supplies I still hoarded in the basement was my set of marble cutting chisels---my 1960s period. I ended up sending all the usable art supplies to Goodwill---enough pastels, charcoals, chalks and tablets for half a classroom and just in time for back to school. And trust me when it say it hurt to send a large set of portrait, oil pastels off because I also dreamed of being another John Singer Sargent. All my expensive printmaking blotters went to recycling. That hurt too. Dried up oil and watercolor paints and printer inks were set aside for another trip to hazardous waste. My art room upstairs already has my prim pencils and acrylic paints and I hope to be able to take up art again once I move, so they will go with me. I'll have an eight foot long closet to divide up between art, quilting and/or knitting supplies plus out of season coats, the vacuum and whatever else I can get in there and still close the doors. 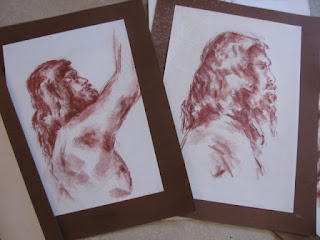 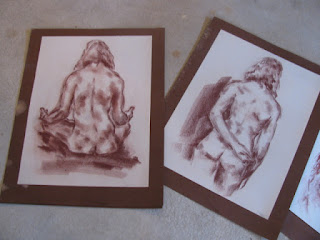 People say that downsizing must make me feel “lighter” or “freer” and at times those words apply. But downsizing also reminds me that most of my life is in the rear view mirror and there is no turning back, no making up for lost time during my caregiving years. Other times downsizing makes me angry for having kept so much or spent so much money on stuff that I abandoned---wasted cash that could have been growing in the bank. Often times downsizing makes me worry I won't be me anymore without the visual queues from my past to remind me of where I've been, what I've done. And this week of downsizing chastised me for not living up to my youthful fantasies. Did I not work hard enough, not have enough raw talent? Or worse yet, did I have talent that I let gather rust to the point that it’s lost forever? Downsizing is like going to a funeral. Sometimes the mourners stand up and tell funny or sweet stories, sometimes they stand up and share their tears and fears. Either way they confirm the fact that the past is really past. ©

Part two of downsizing my art stuff will be posted on Saturday.
Posted by Misadventures of Widowhood at 12:30 AM