The Art of Reviewing Movies in the Rain 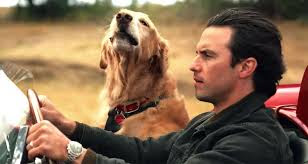 Professional movie reviewers often have cobs up their butts, don’t they. Nothing short of a Schindler’s List or The Tale of Two Cities would qualify as good enough books to adapt into their precious films. Take what the reviewer at RogerEbert.com said about The Art of Racing in the Rain (adapted from Garth Steins' wildly popular 2008 book by the same name): “Anyone who cherishes a dog will be drawn into this story, and even the most hard-hearted will be moved by the dog's devotion and the grief of the humans around him. But the narration that might feel poetic as we read can seem gratingly pretentious when spoken aloud while it is acted out…” I suppose he means lines like: “There is no dishonor in losing the race. There is only dishonor in not racing because you are afraid to lose.” Okay, I admit that I used a yellow highlighter on that line in the book and when I heard it spoken in the movie I didn’t have to think about whether or not it was a metaphor for living life because I already knew the book was littered with metaphors like that.

Mr. Two-Stars Reviewer went on to say, “…The storyline relies on the built-in emotion pet lovers will bring to it and the soapy details of Denny's struggles and loss. Only the most sentimental pet lovers will be able to get past the self-indulgent pretentiousness of the narration, and even they may find it troubling to be told a dog's highest purpose is to become human.” If anyone had seen me crying during the entire last five, life-affirming minutes of the movie they’d know I bought into the premise that some dogs do desire to be human in their next reincarnation and this dog made it come true. Heck, sometimes I’d like to come back as a pampered dog! Doesn’t the grass always look greener on the other side of the street?

I read a lot of books written in a dog’s voice. It’s one of my favorite genres. Heck, I even kept a blog written in the voice of my deceased dog who was at the Rainbow Bridge and looking down to earth narrating Levi’s puppyhood plus having conversations with dogs I’ve had in my adult life. It ticks me off that so many reviewers poo-poo what they consider to be formula written, sappy dog stories like the above mentioned movie, yet let Hollywood produce a film full of car chases, pyrotechnics and flying heroes stretch pants---which are every bit as ‘formula driven’---and the reviewers fall all over themselves heaping on the praise. What are they? Twelve?

IMDb sums up the storyline of The Art of Racing in the Rain this way: “Through his bond with his owner, aspiring Formula One race car driver Denny, golden retriever Enzo learns that the techniques needed on the racetrack can also be used to successfully navigate the journey of life.” Kevin Costner is the voice of the dog, Milo Ventimiglia (from This is Us) plays Denny and Amanda Seyfried (Mama Mia) becomes his love-interest and wife." I wasn't sure Costner was the right casting for the voice-over but at least one reviewer I read thought that was the only aspect of the film they got right.

I went to see the movie with one of my Gathering Girls friend. She’s not a dog/cat person by any stretch of the imagination but she’s a movie buff---sees almost all the new stuff that comes out---and we both left the theater glad we saw the film. It won’t change the world but it was uplifting and life-affirming. It wasn’t particularly deep but there were moments of great depth. It wasn’t full of puppy antics like Marley and Me nor do you have to suspense as much disbelief as with A Dog’s Purpose where the dog was reincarnated several times over. It's an afternoon’s worth of entertainment that deserves more than two stupid stars and snubs by more than one reviewer hiding cobs up their butts. Any movie that isn’t featured during Shark Week is worth three stars, for crying out loud! So who’s got the cob strategically placed now, she types one-handed with the other raised in the air.

At least CommonSenseMedia.org had the good sense to give The Art of Racing in the Rain three stars. They pretty much give any kid friendly film three stars if it doesn’t have sex, swearing and drugs in it. It’s a family friendly review site, a cool place if you have kids because they rate movies for positive messages and positive role models and they give parental spoiler alerts to anything that might upset little Jack and Jill. For this movie, for example, their parental warning was: “It's not just a dog who dies in this movie, but also the---" Oops, I'd better not share the rest of that sentence and spoil the movie for anyone planning to see it and who hadn't read the book.  ©

Email ThisBlogThis!Share to TwitterShare to FacebookShare to Pinterest
Labels: movie review, The Art of Racing in the Rain