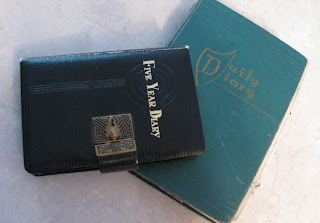 I know what you’re thinking. How many times is that woman going to moan and groan about disposing of her old diaries before she actually does it? Last night I took a five year diary out of the metal box where I keep them all with the intention of giving it a last read. It was a quick read because only two of the five years were filled in and those five year diaries don’t give you a lot of room to write in. I was thirteen and fourteen when I wrote in that book and it isn’t my only diary from the decade. I have three others from the '50s but only one is a single year diary and I’m pretty sure that will be the only diary I end up keeping and therefore I don't need to read it now. It has handbills from all the movies I saw attached to the pages but otherwise it's the diary of a naive and typical boy-crazy teenager.

I’m planning to pull out a few highlights from each of my diaries from the 1950s through the '90s before THE BIG PURGE and I’ll catalog those highlights into something brief but readable, maybe even bloggable. The project will occupy evenings deep into the winter when in past years I would have been knitting in my La-A-Boy. I just can't decide if I should do the project this winter or next. The advantage of waiting is I should have all my sellable stuff gone by then and while reading old diaries is entertaining it feels like I'm wasting valuable time. It's a hard decision. I'll finish reading the 1950s before I decide. At least that much will be done and waiting for the 'fire ceremony.'

Reading the five year diary, the first thing that stands out is what an atrocious speller I was. I already knew that because my "creative" spelling got me labeled 'stupid' when I was growing up. But I had to laugh at how many days the only entry I made was: “I didn’t do ‘inething.’” And I ‘red’ instead of read, went to the ‘liberly’ instead of the library and I always used the word ‘agent’ for again. One of my favorite misspellings is my cousin got ‘mariaged.’ And no matter how many times I try to decipher what I was trying to say when I wrote, “I walret tevletion” I can’t figure it out. Another puzzling entry in the diary was, “I didn’t go to church today because I didn’t get soup.” Say what? I'm seriously thinking of starting another five year diary on day one in my new place. I have Alexa to help me with spelling now and at my age any confusing sentences would get chalked up to dementia setting in.

Speaking of church, I was shocked with how many times I wrote that I had gone to church and to something called B.C. Fellowship. In my memory I thought I left all my church-going days back in early grade school when they used a flannel board to hold paper cut-outs to tell Bible stories. Now I’m trying to figure out if spending two years in my early teens going to church and B.C. Fellowship influenced my current (and often negative) attitude toward religion or if that came later. I’ve been thinking a lot about religion in recent months---and that shocks me, too. I’ve been following the newsletter from the parent company of Continuum Care Campus where I’ll be moving to get a sense of the types of activities that are available at their other two campuses. They have a Creative Writing Circle and the submissions I've read lean towards Godly topics. And I will probably be going to a lot of church choral performances around the holidays. No surprise there since these places are non-profits supported by a foundation through the United Methodist Church. And I’ll probably be making handcrafts to donate to their do-good projects. Fine by me. If I’m going to live there, I’m going to jump into the culture with both feet until/if I have a reason to pull back.

Back to my diaries. I got my first pair of nylons in the mid ‘50s and I wore them with a pink junior bridesmaid dress and silver shoes when my cousin got "mariaged." I thought her new husband was the “perfect husband” and boy was I a poor judge of character back then. He left her with a bunch of little kids, skipped the state and never looked back. Another highlight was I had my second crush on a boy named Gene. (My first crush was on Gene Autry in my pre-teens.) March 12th the boys at school threw snowballs at me and on April 10th I wrote: “We had a play for the grownups at school. I was an "Itay’ girl” aka an Italian. That was no stretch, given I was one of the very few dark haired kids in a sea of blonde-headed Dutch kids that I went all the way through school with.

Reading the five year diary I also realized that I was a busy kid. I was always going off to ice skate, roller skate, dance class, see a movie or go tobogganing. I was in Campfires and I still have my beaded merit vest which probably doesn’t surprise anyone. I also went to three “sleep parties” and even hosted one of my own. Many of my entries were simply “I worked today” but I never expanded on what exactly that meant. I remember having chores like ironing, cleaning the house, mopping floors and working in the yard. I also babysat a set of twin cousins often and I took swimming lessons at the YWCA. The latter of which surprised me when I read it because I spent summers on a lake from the time I was three and I learned to swim long before my early teens. Why did my mom think I needed to go to the YWCA, especially since it involved taking a bus downtown? Details, little Jean, didn't you know your older self would want them?

As I was reading the five year diary I saw a news clip on TV about climate activist Greta Thunberg being named Time's Person of the Year. It made me sad to compare my carefree youth to hers. Kids today have to grow up too fast. They do active shooter drills in school and worry about terrorist attacks and the world being inhospitable to humans in the not so distance future. I deeply regret that the world they are inheriting has so many serious problems to solve but at the same time I'm proud of them and feel they are up to the task. Their social media version of my '50s diaries will be filled with more details and 'red meat' than mine, right down to photos of what they ate at their first Save-the-Planet rally.  ©