At Peace with a Quiet Christmas Alone 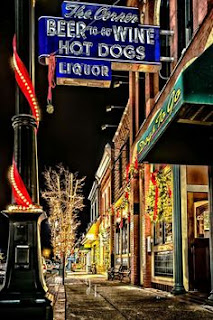 Typing the projected date for publishing this blog post I realized how close Christmas is. I went to a party earlier this week but I’ve got nowhere to go to celebrate on the 25th so the holiday is essentially over for me...unless I want to go to my family’s annual Christmas Eve party which involves a long drive out to the boondocks and back again---one way in the dark in what may or may not be snowy, foggy or icy weather. Last year I was able to stay overnight at one of my niece’s houses so I could make both trips in the daylight, but she’s spending the holiday out of state this year. She offered to let me and Levi use her house while they’re away. But she lives in an isolated log cabin in the woods and the first thing that popped in my head was Jack Nicholson axing his way through the door, calling out, “Here’s Johnny.” To quote one of my favorite book titles, At Least in the City Someone Would Hear me Scream. In reality, my niece’s postcard pretty house is more like the ones people go over the river and through the woods to visit grandmother's house on Thanksgivings but like they say, “You can take the girl out of the city but you can’t take the city out of the girl.” I can't image staying there alone.

My last, above mentioned holiday party was with my Gathering Girls pals and the weather was perfect for us seven senior ladies to get out and about. We have such a great time laughing and poking fun at ourselves and even after four and a half hours it was hard to break the party up and go home. Except for one annoying thing that happened, it was just what I needed. “What happened?” you ask. A little back story first: Ranging in age from 76 to 89 we really don’t need more stuff to clutter our houses, closets and jewelry boxes so we set a rule to only give gifts that are consumable. The party e-mail reminder even defined a consumable gift as “anything that get used up over time” but the same woman two years in a row now gave something ceramic and definitely not consumable.

I don’t know why her passive aggressiveness to the consumable rule bothered me so much, but it did. I’m guessing because the Christmas bric-a-brac she gave would have star-crossed with my downsizing marathon and gone directly in my box to donate to Goodwill if I’d been the one to get it. “You broke the rule," I said and she replied that she didn’t know what a consumable gift is which I didn’t believe for a second but I reminded myself that no one appointed me the Rules Monitor. I was dangerously close to acting like a pouty toddler when in fact I needed to put my big girl pants on and accept this foible in my friend. Life is too short to be so rules ridge---Yup, I repeated that inside my head a few times before moving on. Can I at least get a gold star here for my honesty, for painting myself with the well-deserved petty brush?

I do have a possible plan left for the holiday. In the last decade of my husband’s life we’d often go up to his home town---a quaint destination tourist town seven miles away---on the afternoon of Christmas Eve. If the sidewalks were cleared enough for his wheelchair we’d spend the afternoon doing some last minute window shopping and going into the few stores that are wheelchair friendly. Don's memories of the town go way back and he appreciated the opportunity savor memories like of his dad bringing their team of horses into town the week of Christmas to give the city kids a ride in their sleigh. We’d end our Christmas Eve afternoon tradition by buying hot dogs at the same window on the square where he bought them in his teens and we'd take them to the top of the damn to eat them. I've been back to town on the 24th of December just a couple of times since Don died but I think this year I'll go again. The Christmas mark downs will be in the stores so it will test my will power to see if I can come home with only consumable gifts for myself and the dog. ©
Posted by Misadventures of Widowhood at 12:30 AM