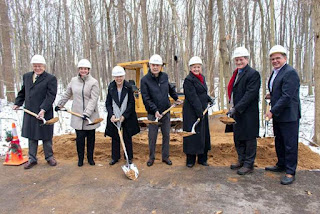 It’s been a busy week here in the land of freezing temperatures and cold hands. On the calendar were two parties and my monthly cleaning service appointment. And since my house was super clean I called up my brother-in-law and sister-in-law to invite them over to look at some stuff that he might like to keep in my husband’s family. They’re coming on Tuesday. Up for grabs are things with no real value but once they’re gone, they’re gone. I have a business card, for example, and key tag from the bus line that my husband’s dad started in the mid '20s, just before the 1929 Stock Market Crash. He lost the company soon after with the Great Depression that followed on its heels.

My brother-in-law would probably be embarrassed if he knew I sold a 1929 letter on e-Bay addressed to his dad. A few years ago I had already given him a whole notebook of family papers from that time frame, including many letters from debt collectors. Together they documented the hardships of the Crash in a very human way that you don’t get out of history books. I urged him to donate the notebook to the museum but I’m not sure if he did and I don’t want to know if he destroyed it. He saw it as a family shame but I knew the county’s local history department welcomes and archives information on the beginning and ending of a local businesses. However, it wasn’t my place to donate a part of his family’s history. The letter missed getting into the notebook by an accident (?) of filing. I discovered the error when I was photographing colorful letterheads to list it on e-Bay when I noticed the person one letter was addressed to. (Yes, people collect antique letterheads. They only go for $5 to $15 but that’s better than throwing out something that is almost a 100 years old.) The letter writer, a gas station owner, filled the entire page with single spaced typing and his desperation was clear. My husband’s father owed $18.00 for gasoline sold to the bus line. The station owner ended by saying he had a family to feed, too, and “if you could just send a few dollars a week it will keep you out of collection.”

Changing gears: One of the Christmas parties/luncheons I went to was sponsored by the senior hall. As I sat there, it struck me funny that it was a fashion show of Christmas sweaters past and present---250 of them and I didn’t see any duplicates! I was wearing one I bought at least ten years ago. The senior luncheons always have the same agenda: Music follows a lunch that is served by high school students who get credit for community service for doing it. And after we finish eating the kids who serve us line up to tell us something about themselves.

One student said she will go into political science and law with an eye towards being a politician. In all the years of hearing kids at monthly lunches talking about their goals I’ve never heard a single one say he/she wanted to be a politician and I made the mistake of saying that to my table mates. Everyone agreed but then one lady started in on how sick she was of all the hearings and investigations of the president. “What are they supposed to be doing that they aren’t doing while they’re wasting time and our tax dollars?” I couldn’t let that go so in what I hoped was a non-combatant voice I said, “In all fairness, there are 435 people in the House and only 15 House members are on the Intelligence Committee and 22 on Judiciary Committee that have been conducted the hearings. Committee work is part of their jobs.” The same lady replied back about how she had relatives who sit in front of the TV every day watching the news and “it’s disgusting,” I couldn’t tell if it was her relatives or the news that she labeled 'disgusting' but it didn’t matter. We were at a party so I zipped up my lips and we all went back to watching a large choir get set up to sing Christmas music.

The next party I went to was at the Continuum Care Campus where I plan to move. It was a combination Christmas and ground breaking party. Finally! Ground breaking was supposed to be in “late fall” and technically the first day of winter isn’t until December 21th but when I think fall, I don’t think of snow being on the ground. Even the mayor was there to welcome us. Ya, he's happy to add a 35 million dollar campus to their tax base. The press release called it "West Michigan’s first senior living community---blah, blah, blah---meant to cater to older adults in search of active, independent living, with an impressive assortment of modern-day amenities." Cool! We toasted with champagne, swapped downsizing stories and ate a wonderful lunch. In the spring when the CCC expects to have the outside construction completed they’ll have walk through tours with an engineer and we’ll get to pick out our finishes and ask specific questions about our units. Hopefully that's enough to keep me pumped up this winter. I need my trips out there to remind me of why I'm selling off and giving away my life. ©
Posted by Misadventures of Widowhood at 12:30 AM