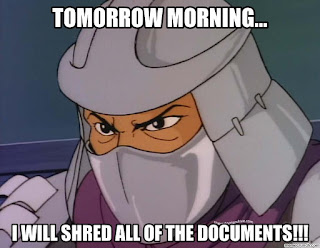 You’d think I’d know better. You’d think I could look at two oak filing cabinets that measures 22 x 38 inches and 20 x 25 inches and know what an impossibly time consuming and grueling job it would be to downsize the contents of both cabinets to fit inside the smaller cabinet. I allotted two days for the project. It took four. But one file folder of records didn’t get shredded because it never fails to grab me where it counts. It contains all my school records from kindergarten through college. I’m saving them just in case some day I have to prove I was once smarter than a fifth grader. But for four days I had quite the process going as I sorted the papers suitable for recycling from the ones that had to be shredded from the ones where a quick swipe with an ink roller would do. I got the shredder so over heated a few times that it shut itself off. A pretty cool safety feature, but it's annoying to have a machine tell you to take a time out when you're on a roll. I ended up with three boxes of papers to take to recycling and five bags of shredded papers to go in the trash.

I’m good at keeping up with yearly shredding of household bills, bank records and other stuff we keep until tax time but one of the problems of having a lot of space in filing cabinets is we tend to keep stuff longer than we should. I found folders full of stuff from groups and organizations that no longer have a place in my life---the quilting club, YMCA, Red Hat Society, Wheelchair Hunters Club, etc. and the adoption and medical records for a dog who died twelve years ago. I also had deeds for houses we sold decades ago and their paid off mortgages records. A hefty sized folder held papers from a lawsuit and three others contained records from businesses we owned back in the last century. But the biggest surprise of all is that I had was a stack of income tax records a foot high from every year going back to my husband’s and my very first jobs! Some of those papers were nearly 50 years old and they literally fell apart in my hands as I fed them into the shredder. You can’t help looking at stuff when you’re deciding what to shred or recycle and I found it fascinating that in my first year of working in the ‘60s I made approximately the same as I get in one month now in pension, Social Security and investment income.

But the gut-punching stuff I found in other files was hard to shred---emotionally, I wasn’t on the fence about the need to shred them like I was with my school records---a two inch stack of detailed medical records covering the three months after my husband’s massive stroke. I had to obtain them and scan copies to Medicare because unbeknownst to us the company we got my husband’s wheelchair from was being investigated for Medicare fraud, selling unnecessary equipment. Not true in our case but we were randomly picked to provide full medical records to prove the need for a stupid, manual wheelchair with a deluxe seat cushion. I had an equally tall stack of speech therapy records, kept because I had planned to write a book about the topic. But the hardest records of all to look through were letters from doctors to spring my husband's power of attorney papers and a ten page workbook from when I filed for Don’s Social Security Disability. As I stopped to read some of those pages it broke my heart---all that Don went through, all he lost. All we both lost to the stroke.

I also found a packet from the funeral home with left over death certificates---they over sold me on the number needed. At the time someone dies you need death certificates for all bank and investments accounts, life insurance, place of employment, social security and even the cell phone company wouldn’t let me cancel our contract without a death certificate to prove I wasn’t a vengeful x-wife, I’m guess. I'm keeping the extra copies because who knows if when I go to sell the house I might need a couple to prove I'm the sole owner of this place. I sent a copy to the county after Don died---twice---to get his name off the deed but I still get tax bills in both our names and even though the county clerk assured me that's normal until I sell, I don’t believe it. I’ve often said that downsizing is like living your life in reserve and the Great Paper Shredding Project is a perfect example of how that works.

At one point during The Project I searched the house for a set of keys to two fire proof boxes I kept inside one of the file cabinets for the really important papers. I had the keys out to unlock the boxes then promptly lost them. I even pawed through my recycle boxes and I would have blamed Levi for taking them just to mess with my head if he had opposable thumbs which is a good reason why older people shouldn’t live with anyone. They’d get blamed for all our brain-farts. I finally gave up on ever finding the keys and when I got around to emptying the shredder into a plastic bag I saw the them! They had gotten knocked off my dining room table and landed on a chair that was tucked up under the table the way neat little housekeepers always stage their chairs.

I know there is someone out there in cyberspace smugly reading this and patting themselves on the back for scanning all their papers and storing everything in a cloud but call me old fashioned, I will never be one of them. Just one trip to media recycling is a good lesson on how technology changes. Floppy disks were once thought to be the end-all solution to having filing cabinets full of documents but try finding a computer where you can use a floppy today. And who knows if stored stuff in a cloud will always be free, safe from hackers and retrievable not to mention what happens when you need something but your computer is acting up? But I do know one thing---it feels good to have accomplished the Great Paper Shredding Project. ©