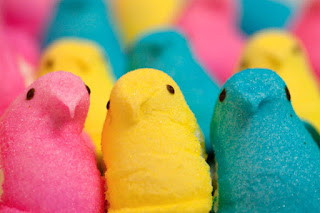 With the strict stay-at-home orders in our state, I had nowhere to go on Easter, no special plans or even traditional holiday foods in the house or colorful peeps lined up begging, "Bite me!" Under normal circumstances I would have had at least some ham in the refrigerator waiting to attack my blood pressure and a half eaten box of peeps already attacking my ample waste line. So thank you, Pandemic, for small favors.

Feeling like I should do something to treat myself on that aberration of a holiday, I splurged after my first morning pee and used three squares of toilet paper instead of two. Back before the pandemic I never counted squares or cared how much I used and now it’s become a world-wide obsession. The travel bidet I ordered isn’t due to be delivered until later this week. I haven’t decided yet if I’ll write about this oddity that the pandemic is bringing to my elder years. Other countries are gun-ho on the gadgets so who knows if I’ll find humor or frustration in the trials and errors of using it or---gasp, that-water-is-cold!---it leaves me feeling clean and refreshed.

On Easter I did my Sunday morning chores---picked up dog poop, gathered up the trash and put it out for Monday’s pickup. While I was out there I brought in the Sunday Press but this time I put it in a quarantine place I set up in the garage for it and my mail to sit for half the week instead of reading it right away. Then I washed my hands and used a half of a Clorox wipe on the door handles, the faucets and everything else I’d touched after getting the newspaper and finished by washing my hands again. Rounding out my Sunday chores was watering the plants, planing my week of nothingness and checking on my e-Bay auctions that always close on Sundays. Surprisingly, sales weren't too bad, given it was a holiday---$537 for eight items that I prompted packed for the post office to pick up the next day..

On the cu-de-sac where I live I can see ten houses and when I was taking the trash out all but two houses were quiet on the Pandemic Frontier. Two families had company over, one of which had six cars in the driveway and two out front and while I was out there a ninth car pulled up. Three little kids and their parent came tumbling out, carrying food obviously completing ignoring the stay-at-home rules of no one being allowed in our houses if they don’t live there. These neighbors have a huge American flag in their front yard that they proudly hoist most mornings but they aren’t American enough to respect all the health care workers who are begging people to stay home so, we as a nation, can keep the pandemic from overwhelming the hospitals even more than they already are. My state has 27,000 confirmed cases of the Covid-19! It’s a good thing I’m not a block monitor because I hate confrontations.

We don’t have block monitors, or course, but they were a ‘thing’ back during WWII. I don’t actually remember the guys who wore Civil Defense arm bands and went around making sure everyone had their blackout shades pulled down but I remember my parents talking about those days. My older brother probably remembers because he, too, had a job during the war. He’d take his little red wagon around the neighborhood weekly to collect tin cans that were used in the production of ammunition. That wartime chore was repeated all across the nation by boys too young to do anything else. My dad was working practically around the clock at a factory that manufactured airplane propellers and bullet casing and his job was deemed essential thus the Department of Defense wouldn’t let him sign up for the military. No Rosy Riveter could learn to be a die maker/machinist who could build and fix broken dies overnight.

All my life I’ve heard stories about the Greatest Generation, the generation my folks were a part of. The generation that lived through the Great Flu Epidemic of 1918/19, the Great Depression, WW II and all the wars that came after. On the home front during WWII men, women and children worked together to made a real difference. They did without, they improvised and they made it through to the other side of the darkness. It warms my heart to see glimmers of that same kind of toughness and willingness to do what needs to be done during our current world-wide crisis. The pandemic is testing a new generation and if my little anecdotal story from my block is any indication, only 20% are failing the test and are being careless, selfish jerks who think the rules for the greater good don't apply to them.

I’m not a religious person. Easter has never been about the resurrection of Jesus Christ for me. I’ve only been to church on Easter Sunday once in my entire life, and that was back when I was a chameleon changing my likes and dislike to fit whatever guy I was dating at the time. But I have studied world religions and Catholicism extensively in college so I can rightly claim I know what I’m turning my back on. Easter, for me, was always about family and food. Lot of people missed their traditions this year be it secular or religious which is both sad and at the same time, a symbol of unselfish love. One of the advances of age is we get to look back and see the difficulties of the past and that gives us street cred to say, “This too will pass." Next Easter I suspect will be extra special for everyone, no matter how we each celebrate. This year I'm glad to see it in my rear view window. ©