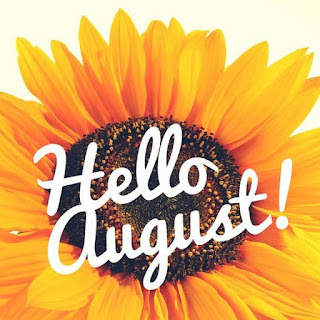 July is finally over and good riddance. I didn’t like it since the beginning but I tried to give it a fair chance. It promised sunny days. We got them. Then it promised summer fun and that fell flat on its fat little keister and by the time July was ready to leave my calendar I was ready to take a butcher knife and carve her up in little pieces. But I told myself it wasn’t July’s fault that America is still struggling to wrangle a world pandemic down on its knees like a cowboy would grab ahold of a longhorn steer and force its head down on the dirt so its body would have no choice but to follow. Nope, they screwed up the order of that rodeo and sent in the clown first and by the time the cowboy came into the arena the bull was so out of sorts from the clown messing around that the cowboy got himself gorged and is struggling to recover in a hospital ward. Okay, so it’s a bad metaphor. Just play along, I’m not going to wear out my brain writing another one and, yes, I'm aware that you can't have a keister that is both fat and little at the same time. I already tried to find other adjectives but my tongue likes the way those two roll.

The first part of July was okay but then the heat rolled in. I can take heat. I wasn’t bothered. Then it was the humidity piling on to our discomfort but, heck, I’m from hardy stock and when it came time for one of my bimonthly brunches in the park with my Gathering Girls pals a breeze from the near-by river was keeping us cool and so happy that the five of us sat there for nearly three hours. We were spread out, social distancing on a couple of picnic tables when I had a mini meltdown. The lady closest to me had just finished telling us that she wasn’t afraid of getting the Covid-19 virus, “If I do I do,” she said, “I’ve had a good life.” She lives with her son and daughter-in-law who both work outside the home and she has frequent contract with grandkids who visit so she’s not as isolated as I am. I, on the other hand, haven’t been closer than six feet to anyone since March expect the eye doctor and the dentist who were both suited up like they were taking a trip to Mars. She no more than said that about not caring if she gets the virus when she started scooting closer to me, closing in on my six foot social distancing space. Neither one of us was wearing a mask so I started scooting in the other direction. “Hold still!” she says. “You’ve got a bug in your hair.”

Maybe it’s because I’d been reading back-to-back psychological thrillers that made me panic when she stretched out her arms to touch me that made me looking at her as if she had an axe in on hand and butcher knife in the other and I nearly screamed, “No, don’t touch me! I don’t want your Covid-19 germs!” The look on her face would have been priceless if I hadn’t put it there. It was a blending of shock, hurt feelings and embarrassment. I was embarrassed too but I was prepared to backpedal my butt right off the end of the picnic table to get away from her. But she withdrew her arms and grumbled, “I don’t have Covid germs” to which I quickly snapped back, “That you know of.” Our friend who was sitting across the table half way in between the two of us thought the whole thing was hysterically funny and she said, “That’s our OCD Jean.” I don't think of myself as OCD so that shut me up, wondering if that's the kind of vibe I give off. But I suppose the proof of that pudding is in this paragraph.

And believe it or not, that was the highlight of the second half of July. The next day I had $400 antique lamp get broken in shipping an e-Bay sale which had both me and the buyer mourning its loss. But I've shipped at least 1,000 packages this past 18 months and it was only the 3rd thing I’ve shipped in nearly twenty years of doing e-Bay that got damaged in shipping. Refunding the guy his full payment plus his shipping was the easy part, beating myself up for not doing a better job of packing was harder to swallow. But swallow it I did because, really, I had no other choice. Actually, that’s not true. I could have had him hold the packaging and lamp for the postal inspector to come see it for an insurance claim, but all that would have done is waste the buyer’s time. I questioned at the time I packed it if I had enough cushion around the lamp, but I reasoned that it was metal and couldn't break. I was wrong. Cast metal does break. The moral of that story was that I needed to give myself a timeout from e-Baying for being careless and not listening to my inner voice.

So here I sit typing away while waiting to pick up the dog from getting three more teeth pulled and his receding gums treated to keep out every germ on the face of earth except Covid-19 from destroying the rest of his teeth. The check to the veterinary hospital: $963.00. This past ten-twelve days I've pretty much blanked out on everything but the bare necessities of living. I know it's just pandemic and politics related depression but I'm vowing to start fresh now that August is here. Has anyone got a Mary Poppins costume I can borrow? ©
Posted by Misadventures of Widowhood at 12:30 AM