Building Our Own Violins aka Mindfulness 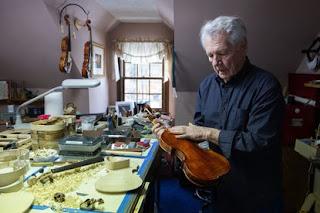 NOTE: This post was originally scheduled to run a few days after the Capital was overrun with domestic terrorists. So I kicked it back to a draft to make room for a few posts about current events. Today is Inauguration Day and I'm sure most of us are holding our breaths waiting to exhale when/if we get through it peacefully. In Trump's inaugural speech four years ago he painted a dark picture of America and promised: "This American carnage stops right here and stops right now." In a perfect world, he'd realize those words should have been spoken today, on his last day in office. In a perfect world he'd know that his legacy will forever be connected to the worst carnage ever set upon our Democracy. But it's not a perfect world and more than ever we could do ourselves a service if we'd spend a little time each day practicing mindfulness.

Do you know what impresses me? That a guy could apprentice to a long line of violin makers and still be able to take the craft to such new heights of perfectionism that people nearly three hundred years later are willing to pay millions of dollars to own one of his instruments. Antonio Stradivari, in his seventy years of professional work, made 1,100 stringed instruments and 650 are said to still be in existence. Truly amazing! From a little stab of maple, some pine, glue and varnishes, and with a methodical persistence to find perfection the Stradivarius was born, a line of instruments with full woody tones unsurpassed even today.

I wonder what it would feel like to be truly gifted at something. I wonder if Antonio knew he was a gifted. I doubt it. After all the whole town of Cremona in the northern region of Italy where he lived and worked had a history---three centuries long---of making musical instruments. Did he think of himself as just another guy on an assembly line? Like some guy in Detroit punching out automobiles? Or could he feel that his work was special? Antonio must have had some idea; he kept his vanish recipe a secret even from his wife and children and many people feel that his varnishing process is what gave his violins their magic sound. But then again he was making a living and people protect their livelihood from their competitors, so that doesn’t necessarily mean he knew he was creating masterpieces that would endure over centuries.

I have a book titled, Wherever You Go There You Are---at least I had it before the big book purge last summer. That title amused me whenever I saw the book on the shelf. The author would not be happy to learn that I’ve never actually read the book cover to cover, but I’ve read enough of it to know that it’s about cultivating our ability to live in the present moment. Mindfulness. I don’t know where I am going with this except that I believe a person like Antonio Stradivari must have understood living in the moment. As he worked, he let the woods and varnishes speak to him and he listened in an analytical way that his predecessors, and those who came afterward, hadn’t done. He was not just another guy on an assembly line punching a time clock, picking up a paycheck. He had the “it factor” that Simon on American Idol used to talk about.

I have a sister-in-law who is a wonderful cook. Not only does her food taste fantastic, but her presentation, creativity and thoughtfulness in menu planning are something that I have long admired. She has the “it factor” in the kitchen. She’s in the moment when she is in the kitchen. I have a niece who when her two sons were young, she had the “it factor” when it came to motherhood---and now when it comes to grand-parenthood. Her older sister once said that Melinda is not just a mother, “She’s a human development specialist.” She’s in the moment when she interacts with the children in her life, gives them 100% of her attention.

You can guess what I’m going to say next. Yup, I’m going to tell you that we don’t have to build Stradivarius violins or paint like Rembrandt to achieve a state of oneness with our surroundings. To find that one thing that we can be passionate about, that something that regenerates our spirit and soul, and when we find it we can’t help but give it 100% of our attention. We do so many things on autopilot, thinking of past regrets or worrying about the future, instead of seizing the moment we’re in. Yada, yada, yada. This could be lecture #704 to myself because I fall out of mindfulness as often as I fall into it.

Someone in another blog said words to the affect that we live for the little moments in life that tell us that we’re alive. I couldn’t agree more. I would only add that increasing our happiness can come from practicing mindfulness—of teaching ourselves to live in the small moments of life. Over the past year when the pandemic and politics because the strangest bedfellows ever paired together it’s been impossible for me to live in the moment and I’m hoping I can get back to at least trying to do that. Granted, I’ve never been good at it for more than an afternoon, a day or a week at a time but those times when I do achieve mindfulness have the power to heal. And 2020 left me with a lot of wounds that need healing but it’s time to say, “Yup, today I'm metaphorically building my own violin”---to enjoy the process of whatever I’m doing at the moment. Antonio Stradivari might have said it this way: “If you live in a town that builds musical instruments, build the best damn one you can build.” If you're me you vow to bake more bread, a process that never fails to pull me into the moment. ©