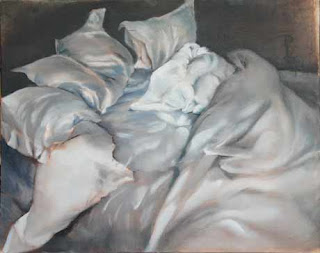 God, I don’t know where to start this post. All areas of my life and the world at large are in turmoil. My clothes dried chose this past weekend to quit working, my house is a major mess because before all hell broke loose in D.C. I had decided to make a major push to get some odds and ends listed on e-Bay which is a long process of cleaning, photographing, writing up listings, packing stuff for shipping and finally uploading the photos and descriptions to e-Bay. I had four rooms set up for staging this process. Turns out I was thankful I had that stuff to do so I wasn’t tempted to crazy-glue my butt down in front of the TV watching the ugliness unfold. I still had the TV on because I’ve always believed that it is my duty as an American to bear witness to the major events of living history that have the power to change the trajectory of our nation. If people can personally experience those events like 9-11 or insurrectionists storming the Capital I can at least watch them unfold from the comfort of my own home. But I don't want to write about the Demigod in the White House and his disgusting supporters; I did that in my last post. This post is about my personal mayhem.

My bed hasn’t been made all week and to quote one of my favorite blogger friends, Dawn at Bohemian Valhalla, “The condition of your Bed is the condition of your Head.” Like I told her, “I admit to being a person who is bi-polar with bed making. I go in streaks that last a week or two. Right now I'm in the not making it cycle.” What I didn’t tell her is that when I’m in the oppose cycle I’ve been known to start making one side of my bed while still in it in the morning. It’s a talent, trust me. When it comes to Dawn’s theory of the head-bed connection I don’t know what she thinks comes-first-the-chicken-or-the egg but I decided if making my bed could help my scattered frame of mind it was worth trying.

I stripped my sheets off, threw them in the washer and it was when I moved them to the dryer that I found out that my dryer didn’t work. Ohmygod, what message do you think the universe was sending me!? I’m one of those persons who washes my bedding and puts the same set back on. I didn’t remember where my backup set was because I’ve been cleaning and reorganizing closets. And what do you do with a washer full of wet sheets on a Sunday when you can’t get a repair person out? The first thing I did was search my pantry for a non-existent bag of cookies or something else that would put me on a sugar binge. Damn January diet plan had me coming up empty. Somewhere along my mini meltdown I had a few choice words for Dawn for putting the notion in my head about the state of my bed has something to do with the state of my brain. (Just kidding, Dawn. I still love you.) Seriously, though, I haven’t seen a laundromat in years although I still have roll of quarters that I’ve been hoarding for twenty years when I used to go to one. A lot of good that would do me now because I hear tell the prices as gone up a tad since then.

So what's the second thing a woman does on a Sunday morning after learning that she’ll have to find a dryer repair person next week? She goes out to the street to bring in the Sunday paper. But for the first time since she’s been getting the Sunday paper---a tradition passed down from her father---she discovered that the front section was missing. And since she’s one of only two people who gets the paper on the cul-de-sac she couldn’t help thinking someone stole the front section out of her mailbox. It probably had a lot of coverage of the brutal insurrection at the Capital. Since she was planning to cancel her subscription the next time it was due it really didn’t matter, but can anyone tell me why, in this paragraph, I started talking about myself in the third person? Is that weird or what!

By Monday morning I had read trouble-shooting stuff online and managed to fix my dryer woes. It’s a newer model, the kind with a computerized motherboard and like other computers, I had to cut the power off and turned it back on, which meant I had to do it at my circuit breaker since I couldn’t access the plug on the wall behind the washer and dryer. I let it sit for six whole hours, just to make sure its computer had plenty of time to do whatever it does to reformat itself back to factory settings. I held my breath when I finally pushed the button and found the dryer working again! Tech warrior at your service.

I felt like a tech warrior last week too because I also repaired my laptop computer after the mouse drivers got knocked out. I have to reinstall my printer drivers on my desktop fairly often so it wasn’t a big deal, but for some reason the new drivers reversed the mouse’s right/left functions. Talk about buying me a ticket on the Crazy Train, that sure did and it took me two days to figure what was causing my computer to act like an over-caffeinated, sleep deprived mother of three screaming toddlers. (Or maybe it was me acting like an over-caffeinated, sleep deprived mother of three screaming toddlers.) Either way, it was a simple fix once I identified the problem. Now I ask you---Dawn---if my brain was as messy as my bed would I have been able to be my own tech warrior? Now, if I could only figure out why my Kindle books quit syncing across all my devices I'd earn another bead for my tech warrior vest which reminds me that I sold my box of Camp Fire merit beads last summer. Boohoo, I didn't want to do it. ©

P.S. On Wednesday the front section of the Sunday paper showed up in my mailbox with no indication that it was printed late. Which ever neighbor "borrowed it" was nice enough to return it. LOL

Email ThisBlogThis!Share to TwitterShare to FacebookShare to Pinterest
Labels: God-if-know