Dogs, Creamsicles, Cows and Snow---Oh My! 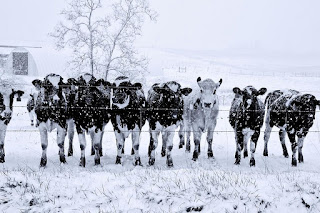 I started writing this post on Tuesday when it was a bright and beautiful day here in West Michigan. The temperature outside was twenty degrees but the sky was cloudless and the only snow in sight was hugging the shadows. I wrote about my ‘To Do List’---ya, I know as boring as watching beach pebbles mate. The first thing on my list was dropping the dog off at the groomers after walking him around the neighborhood to make sure his bladder and bowels were empty for his three hour stay. The second place I had to go was to the pet store to get Levi a 15 pound bag of kibble and enough peanut butter and apple treats to last him until his next grooming appointment in six weeks. After that I had planned to stop at Starbucks for a tomato and mozzarella sandwich and chestnut praline latte. But the line at Starbucks was impossibly long---or maybe I had an impossibly low tolerance for sitting in the car fifteen minutes just to get up to the speaker. Instead, I skipped to the next thing on my ‘To Do List’, a stop at a small grocery store that carries Reddi-Wip barista Sweet Foam. Everything in my life goes better when I can start my day off with a good cup of doctored coffee.

I also discovered that if you spray and stir the barista sweet foam into Orange Crush pop it tastes just like a creamsicle from ye olden days of my youth causing me to run out of the stuff sooner than usual. I may not be much of a cook but I gave myself an A+ for creativity in concocting that drink. It makes me feel eight-ten years old again when I was willing and able to walk a four mile round trip to a country store to get a creamsicle. Can you imagine letting little kids walk that far by themselves today without someone claiming you were a neglectful parent? We didn’t have cell phones back then, of course, or even landlines at the cottages and our mothers didn’t even have cars to come check on us if we didn’t come home at the expected time. In all the years my cottage friends and I made that daily trip to the store we only had two scary encounters. Once when a man tried to get us into his car and we ran into the woods like it never dawned on us that the woods was a good place to kill us and bury our bodies.

The other scary encounter involved five or six Holstein cows that got out of their field Me, Allen---a kid who I’ve known since birth---and our siblings ended up in a tree to get away from them. We were up there so long that Allen had to poop. Yup, he did it, hung his bare butt over the branch of the tree and dropped his "little logs” down to the ground to the delight of the cows who all took turns smelling what fell from the sky. I thought we’d die up there in that tree but eventually, as all cows apparently do, they did go home at milking time. So now you know the backstory on why I love my vintage De Laval advertising tin cows that are grazing on top of the doorway molding in my kitchen. Cows remind me of summer fun, of having to walk past them every day in the summer to go to the store for pop and ice cream. That scene on the corner near our lake with the barns, silos, pond and cows hasn’t changed since I was three years old. My niece owns the cottage now and when I visit and pass by that field of milk cows I can feel myself relax. Once in a while I’ll stop the car and walk up to the fence and sure enough there will be a few curious cows who will come to check me out and I tell them I knew their great-great-grandmothers.

Today as I write this I’m looking out at our first major snow fall of the year which I’m guessing is five inched deep and it’s still coming down. The dog is still sleeping and my driveway plower just left. I’ve had the same service for years but this year he took on a partner and the changes I see are going to be fun to watch. For one, they added a sidewalk service to their menu---Hurry! I’ve never minded shoveling snow but I shouldn’t be doing it with my bad elbow. And now all I have to do is shovel a path for Levi to get to his dog pen. And the new partner is sending out emails about each snow event. The first event wasn’t deep enough to plow but having a husband who was in the business for nearly three decades I thought it was clever of my service to let customers know about the behind the scenes activities like how many times and where they checked the depth of the snow around town that night looking for the 1 ½” trigger point to call his crew in to work. It never came. With today’s ‘snow email’ the excitement that all plowers get when the first big one hits of the season was almost palatable. And he wrote about how many dry runs they made of the routes before we even had snow in our forecasts to make sure their drivers knew their routes so no customer got missed and how they'd gone over their equipment several times to be sure it was all working correctly. The email brought back memories of my husband and I doing the same things. Memories that warmed my heart on this cold and beautiful winter day. ©