Power Outages and Standing up for Truth 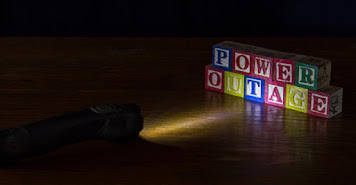 I hate power outages. I especially hate them at night in the wintertime but we had one the day the House of Representatives voted to impeach the president. Again. It started at twilight giving me just enough time to gather the six solar lights that normally line up along the walk to my front door and I staged them to light up a path from my master bath through the bedroom and living room to the kitchen. This time of the year they don’t get enough sun to keep them lit more than a couple of hours after dark but those couple of hours saved me using up the battery on my camping lantern. A half hour into the outage I got a voice mail and text on my cell phone and robocall on my landline from the power company estimating how long the outage would last. Three hours they said, but that turned out not to be true. It lasted five. Apparently after the last outage I went into over-killed signing up for these alerts. I ended up getting a total of twelve updates which is more action than my phones have seen since Christmas.

I didn’t have an unread books downloaded on my Kindle so I spent most of the outage reading a book I’ve read twice before. It’s a good book, so I didn’t mind. In fact, knowing how it was going to end seemed comforting, given the political climate we’re in---a counter balance to that feeling of waiting for the other shoe to fall and not knowing if anyone will be there to catch it and return it or if that person will use it as a weapon. A poor analogy for the chaos of the January 6th insurrection and holding my breath hoping we don’t see a repeat on the 20th but no one ever accused me of being the sharpest pencil sitting in the coffee cup.

Two hours into the outage it was getting cool in the house so I managed to wrestle a sweater on to the dog. He hates wearing stuff, and apparently it wasn’t quite cold enough inside for him to appreciate the garment because he alternated between asking to go outside the front door and the back door. I didn’t dare take a chance that he didn’t have a bowel or bladder issue so I’d roll up the sweater to protect it from getting christened with pee, let him out and in. Finally, I got the hint that he didn’t really need anything other than to cool off, so I wrestled the sweater back off him and he settled down.

The day after the outage I found a message on my phone that came during the outage from the son-I-wish-I-had. He started the message out, “I’m calling from a Democrat run concentration camp, but I don’t want to talk about politics. I want to know if you want to start working on some things that needs doing to get your house ready to list.” It saddens me and makes me feel like I’ll be walking on eggs where Tim’s concerned for the first time in the 50 years we've known each other. I hate that he's been indoctrinated into Trumpism and far-right spin.

Since the insurrection at the Capital Tim's been Facebook posting like crazy which, in itself is out of character. His posts have all been focused on the evils of Socialism and social media censoring the president, and “there needs to be an investigation on why that 'poor woman' was shot through a locked door.” He got a lot of 'likes' and amen like-comments from his posts and no push back…until I came along. About the woman I wrote: “Did you see the video leading up to the shooting at the Capital? The woman was shot while climbing through the window in of the door to the Speaker's Lobby after the mob had broken through the glass. Totally justified.” And then I added a link to the graphic video.

On one of his censorship posts I pointed out that the 1st amendment only protects free speech from the government making laws against it and he posted back, “Are you okay with that?” So I replied: “My opinion doesn't matter. PRIVATE companies have a right to apply any rules they want about the content they allow or not allow. For example, I was a monitor on a large stroke support site for nearly five years and we had a rule that people couldn't post about wanting to commit suicide. It was my job to remove those posts and contact their local police department for a wellness check if I thought they were serious. We had a five step procedure to make that judgement call. If we had let those suicide posts stand others could come along and encourage them to do it and that would have made the site legally liable. What Facebook and others sites are doing is no different. Again the constitution only protects us against the GOVERNMENT restricting free speech. The president has a fully staffed press room near the Oval Office where reporters are waiting 24/7/365 and he can get on all the networks within a few minutes if he wants to.”

No one gave either of my comments a ‘like’ or replied in any way which I consider progress since no one called me brain-washed, stupid or delusional either. My comments effectively ended the threads. Tim lives in a Red Bubble of friends, neighbors, church members and family and all his recent political posts are re-posts from far-right conspiracy websites. I don’t want to lose his friendship over Trump (and I don’t think I will) but if there was ever a time when we need to have the courage to stand up for facts and the Truth, it’s now! Our silence gives Thump's supporters fuel to keep spreading misinformation and those lies are like a cancer that is killing our Democracy. ©