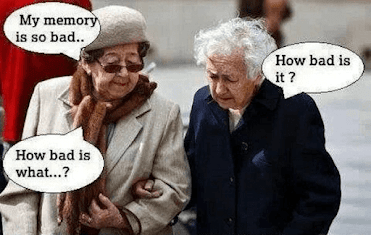 One of my frequent dinner partners here at the continuum care campus is an 80 year old I nicknamed Ms. Social Worker who you may or may not remember had a series of falls a few months ago that, rumor had it, was due to a misuse of an opium-based pain medication. After her seventh fall, a long hospital stay and the addition of a walker in her life, she’s no longer falling but at dinner last night she told me she finally has a diagnosis of what’s going on with her: Dementia. She said a scan of her brain showed “masses of white spots, more than most people have at her age” and that she's been noticing symptoms for six months.

What do you say to someone who tells you that and then starts talking about going to a state where they have assisted suicide? “I wouldn’t mind dying of cancer, a stroke or a heart attack," she said, “but I don’t want to die of dementia.” I asked her if the doctor talked to her about medications that can slow down the progress of dementia---I know they have a few because my dad was in a trial for Aricept that was eventually brought to market and there have been newer ones developed since then. She said he didn’t but she has another appointment with a neurologist and her daughter is flying in to go with her. I told her to try not to panic or do anything rash because she’s probably got a few years before she wouldn’t be able to manage on her own. Knowledge is power, I told her. She’s still got time to build some good memories with her family. I didn't tell her I'm against legalized assisted suicide. (Ya, I know from past posts that some of you reading this take the opposite side. No need to debate this issue here again.)

When she was hospitalized her kids came to her apartment and took all the drugs out that they didn’t want her taking anymore including prescription sleeping pills and the opium based pain pills and thank goodness for that because the way she was talking at dinner I’d be worried she’d engineer her own death before Christmas. I don’t suppose any of us knows how we’d react to learning we had dementia but I’m pretty sure my first priority would not be how can I off myself. I’d hope I’d still remember the pleating words of Dylan Thomas to his dying father----

Do not go gentle into that good night,
Old age should burn and rave at close of day;
Rage, rage against the dying of the light.

That said, I’ve been going to the dementia education group meetings here on campus since my brother moved into the Memory Care building. Last week a new-on-campus couple attended and the woman has dementia and it turned into a support group more than a lecture. The guy in the couple did a lot of talking and as he shared his history of dealing with his wife’s prognosis I recognized myself in his almost manic wanting to do everything possible to hold on to his old wife, going from one kind of therapy to another. He talked so much FOR HER that the Director of Dementia Programs at one point asked her specifically how she felt about having dementia. It took her forever to form her words while the director gave non-verbal ques to her husband not to speak. Finally she answered that she felt like she was just waiting to die, that nothing mattered anymore.

The couple reminded me of a come-to-Jesus moment I had with my husband around 5-6 years our from his stroke that left him right side paralyzed and with a 25 word vocabulary. I had spent those years fighting to get him into every physical and speech therapy I could including swimming pool work but nothing really brought improvements in him. So I asked him if he wanted to stop therapies and he did. We got off the merry-go-round after that and just tried to live as normal of a life as we could.

The director said to the woman, “We have a support group just for you---no spouses or kids allowed---where you can talk with others going through the same thing. I think it would help you.” All the time the director was taking to her she looked directly at the woman, never gave her husband a glance. Leading up to this one-on-one exchange it was easy to see that the husband was so used to speaking for her that she had penned up frustration. I remembered that look in my husband’s eyes. With his speech issues he was frustrated a lot. At the dementia lecture before this one they highlighted how important it is to look dementia patients in the eye so now I have two people to practice that strategy on when we talk---Ms. Social Worker and my brother. This is not something that is normally in my wheelhouse.

Since my brother moved into the next building where Memory Care patients live, people here in independent living have asked me about what it’s like over there. And I tell them honestly that visiting the place takes the fear out of the possibility that I might have to move there someday, that I see compassionate caregivers and an attempt to offer the residents stimulating activities---they even took them downtown to the museum last week to see a Walt Disney exhibit last week and this week our bus is taking them to sculpture garden to see Christmas trees from around the world!

I see other things, too, like a woman who picks up objects in one person’s room and leaves them off in other resident’s rooms and how little real privacy they have over there. But I don't tell the people living here in Independent those kinds of things because at our ages most of us already know what goes on behind the public face of places that house dementia and Alzheimer's patients. The fear of dementia is, in part, based on its ability to rob us of our dignity and if a little sugarcoating helps lessen that fear then call me a confectioner.  ©

Email ThisBlogThis!Share to TwitterShare to FacebookShare to Pinterest
Labels: dementia