Day Trip to Secrets and Accomplishments

Growing up, I knew about a house four or five blocks from where I lived that was rumored to be a stop on the 1800s Underground Railroad. As an adult I got to tour the inside of that house when I started using a tax service that worked out of that old, stately place. Like many houses on the Underground Railroad it had a tunnel between the house and a barn where runaway slaves would leave false bottomed wagons, make their way into the basement of the house via the tunnel where they’d be fed and get some rest before going on the next leg of their trip to Canada.

I don’t remember when or where I learned about how quilts were supposedly used as signals for those helping the fugitive slaves along the ‘railway’---hung on clotheslines or slung over windowsills to point the way to safe houses or warn of danger. Although the use of ‘quilt codes’ is now controversial among historians, it seems like I’ve always known about them (or their rumor) and it never fails to surprise me when I find out that this kind of thing isn’t common knowledge. Tuesday was one of those times. I went on a day trip organized through the senior hall that was billed as a tour of the Underground Railroad and I couldn’t believe that one woman actually thought we’d be seeing real railroad tracks underground! How does a person get old enough to collect Social Security and not know the basics of American history? Our tour guide, by the way, said, “There’s no evidence that quilt codes were ever used in Michigan.” Bummer!

The day trip took us to Battle Creek, Michigan, to the home of Sojourner Truth, a former slave and important historical figure by anyone’s standards, an activist in both the Abolitionist and Woman Suffrage Movements. From the time we left the senior center and got to her house, our tour guide gave us a crash course on the Underground Railroad, the Civil War and the Quakers. This started at seven o’clock on a coffee-deprived morning so my head wasn’t quite awake enough for such heavy topics. I didn’t know what I expected on a “history trip” like this but it was intense and I was glad we weren’t expected to pass a test when we stopped for lunch. A couple of facts stuck with me, though, one being that an estimated 50,000 slaves passed through Michigan via the Underground Railway. And I already knew that thousands of x-slaves were resettled overseas in what is now Liberia. But I didn’t know that what I was taught in high school---that x-slaves after the Civil War were all given 40 acres and a mule---is not entirely true. The Acts that made that happen were reversed in the courts and the land was returned to its pre-war owners. Very few slaves were able to hold on to that land.

Lunch was at a vintage railroad-station-turned-restaurant and the conversation with my three table mates was one that author Robert Fulghum of All I Really Need to Know I Learned in Kindergarten fame would be proud of---we shared in equal proportions with no one person dominating the talk. It was great. It was entertaining. It felt like we’d known each other for years.

After lunch was the highlight of the trip for me. We went to a funky little museum where a self-proclaimed hero worshipper of Sojourner Truth crowded all fifty of us together and gave us a robust and interesting talk about Ms. Truth, who had lived just down the street for the better part of two decades. I already knew quite a lot about Sojourner including her activism on the lecture circuit, her friendship with famed suffrages, and her meeting with President Lincoln. She was reported to be such a charismatic and popular speaker traveling nation-wide that when she died over 1,000 people came to Battle Creek to attend her funeral. After leaving the museum, the woman who gave the talk hopped on our bus and we went to see Sojourner’s simple gravesite, a bigger-than-life monument of her in a small park and to see another spectacular monument commemorating the Underground Railway.

Looking around our world today some people think it’s “going to hell in a hand-basket” as my mother used to say. But a day trip to past secrets and accomplishments tells us that’s always been the perception for those living through times of changing values. Depending on which side of the struggle you fight or root for determines if you see societal struggles as hopeful for the future or a threat to your whole way of life. It has always been that way and it probably always will. © 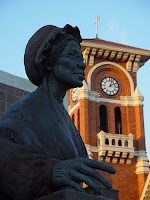 Photo at the top is of the Underground Railway monument. Pictures can't do it justice. It's huge and has a lot of details on all sides. The photo at the bottom is of the top portion of Sojourner Truth's 12 foot high bronze monument. In 1993 the town raised $750,000 to have it made.